"The world moves so fast today, People forget how much better they had it as kids... when hours seemed like days, and a favorite toy could be a child's best friend." - Winslow Schott, Requiem

Winslow Schott, dubbed the Toyman by the media, is a terrorist and former Queen Industries employee. He was hired by Lex Luthor to create kryptonite bombs around Metropolis to get revenge against Oliver.

Winslow is a plump man, with blue eyes, wavy, medium length brown hair, mutton chops, and wears a pair of round, purple glasses. In his first appearance in Requiem, he was seen wearing a green and black striped leather jacket with a green polka dotted dress shirt underneath with a vest over it.

When he returned in Echo, he was seen wearing a black tuxedo with a yellow flower pinned to it, with a white shirt and bow tie underneath it, though this Toyman was revealed to be a robot. When the real Toyman was caught, he was placed in prison, where he was given a standard orange prisoner jumpsuit to wear. He was still wearing this jumpsuit when he re-appeared in Prophecy.

Winslow, even when he was working for Oliver Queen in Queen Industries as an inventor at MIT and S.T.A.R. Labs, was immature, child-minded, as he was known for bringing toys into the work place, and later started placing mini-explosives in them, which got him fired. This angered him extensively, to such a degree, that he honed in on Oliver for revenge and took the most drastic measures to do so, manipulating anyone to get to Oliver. He was quite obsessed over mechanical objects and devices, and seemed almost psychotic.

Winslow founded and currently heads a league-like organization of super-villains called the Legion of Doom also known as Marionette Ventures. As the leader, he exhibits complete authority and control over the team, proving to be cold and ruthless.

Winslow possess no superhuman powers whatsoever. Winslow is, however, a very logical, strategic, articulate, and resourceful man who is quite dexterous, as he often is seen building toys and small mechanical devices like small explosives, indicating the steadiness in his fingers. He appears to be efficient in math & science. Winslow is able to embed chips and sensors into other items like balloons and stuffed animals.

He was shown being able to build a Clapping Monkey Bomb as well as shown to beiplacing explosives inside a Newton's cradle. He has also created a robotic duplicate of himself with a bomb inside of it, a new Kryptonite heart which in turn could effortlessly absorb meteor rock for John Corben, kryptonite bombs which Lex used to split Clark and Lana apart.

Winslow was a scientific inventor at MIT as well as S.T.A.R Labs who was hired by Oliver Queen to work for Queen Industries. As a great mind though a bit eccentric, his work produced big profits for the company, but he began to attract attention when he started to bring toys to work. He went too far when he decided to put explosives inside the toys, and this caused his immediate termination from the company. For six years Schott remained inactive, harboring a grudge against Oliver until he was found and hired by Oliver's great nemesis, Lex Luthor.

"The balloons, the monkey, the ridiculous costume you're wearing ... you're a clown, right?" - Oliver Queen to Winslow Schott, Requiem

An angered Schott was sought out by Lex Luthor, who was on life support, to act as his assassin to get rid of all those who had betrayed him, starting with Oliver Queen and Tess Mercer after they stay with his company. Taking advantage of the hatred of Schott by Oliver, Lex watched him and gives orders through his clown puppet. Schott put a bomb with Kryptonite in the meeting room of the LuthorCorp Board of Directors, hoping that it could kill Oliver, but failed.

Following the orders of Lex, Schott put a bomb on the roof of the Daily Planet that could blow up the whole city, and later went to Metropolis General to definitively kill Oliver. He deceives a nurse to show him Oliver's room saying that he was a messenger and had a package for him, later tying Oliver to the couch. He places a time bomb shaped as a toy in front of Oliver as his revenge. Unfortunately for Schott, Oliver broke free from the handcuffs and then forced Schott to reveal where Lex was hiding.

After tying up Schott, Oliver escapes from the hospital. When Chloe goes to visit Oliver, she finds the Toyman in Oliver's bed, who uses a whistle to spread a shutdown powder that leaves her unconscious before making his escape.

Oliver used the toy bomb of Schott to kill Lex, leaving the Toyman to take the blame for the murder and effectively making him a fugitive from the law.

"Toyman is back" - Chloe Sullivan, Echo

After months of inactivity, Toyman resurfaced and captured a group of people, strapped a bomb to an innocent man with a mask as a hidden timer, and placed in a factory of Queen Industries. Clark managed to rescue the hostages and after researching, he discovered it was Winslow who was behind it all.

Toyman wanted vengeance for getting framed for murdering Lex Luthor and then created a pressure plate system which he placed on the podium of the Ace of Clubs where Oliver would later stand to give a speech. He threatened to kill Oliver and everyone else in the gala if he did not confess to murdering Lex. Clark managed to get there in time to stop the detonation, only to find out that Schott was never at the gala - an exact robotic replica of Toyman acted as the detonator the whole time. Clark destroyed the replica using his heat vision.

Chloe Sullivan was able to locate Toyman, who had him arrested and sent to Stryker's. Tess later came to Winslow and shot him in the knee for trying to assassinate Oliver and said he was going to have much time to play with a new toy. Tess then gave Schott Metallo's kryptonite heart and ordered him to find out how it works, to the Toyman's awe and delight.

"What kind of gamesmen wouldn't follow his own rules?" - Toyman to Lois, Prophecy

As part of his imprisonment, Toyman was put in solitary but became connected with powerful allies, whom were actually foes of the Blur and his team of heroes. Together, they were known as Marionette Ventures. John Corben revealed to Lois and Lana in the process of joining Marionette Ventures, Winslow supplied John with a new Kryptonite heart which in turn could absorb meteor rock with no problem at all. However the job didn't work out the way Schott wanted it to, something that John was secretly glad of.

Toyman was approached by Courtney Whitmore who placed with a mind control device and used her to due his organization's bidding. When that failed, he was confronted by Lois Lane, who he convinced that if she didn't put on the device that he would send his evil companions to destroy Clark Kent.

He then sent her to kill the Blur. However, she failed and Clark met with Toyman face to face. Even though Toyman knew Clark's true identity, Clark knew he wouldn't reveal it to the public because the Toyman still had some "games" to play.

At LexCorp R&D, Superman and Lex are all forced friendly-like as Lex analyzes the teleportation vest used by a couple of criminals in a hostage situation and admits the technology is his, but it was stolen. Stolen, in fact, during a series of robberies made on Lexcorp and other companies, one of which was foiled way back by the Green Arrow and Superman.Lex surmises that whomever created these teleportation vests using all that stolen technology would have to be very familiar with Lexcorp's patents and proprietary coding. Which leads Superman to Stryker's Island prison and Winslow. Safely incarcerated and seemingly not a suspect, according to Warden Draper, since he's been under constant supervision in "hyper-solitary". Lois Lane arrives at Stryker's Island to question Toyman about Prankster and he knows about him. Toyman reveals that Prankster is just a pathetic imitation of him and they worked together in the Queen Industries Research and Development department before Toyman started working for Lex. Winslow then asks Lois if Lex about him since his return which leads Lois to retort that Toyman must rank pretty low since his memory has been removed. Toyman reveals that Oswald has no sense of gamesmanship and would cheat whenever he can and had stolen his idea for Kryptonite bullets.

Toyman is a recurring villain of Superman in the DC Comics. In the comics, Winslow is known as the villain, Toyman. The Toyman first appeared in 1943 and appeared in several Golden Age Superman stories. Schott appeared less frequently in comics published after the early 1950s, but remained a semi-regular foe during the 60s, 70s, and 80s.

After 1985's maxi-series Crisis on Infinite Earths and John Byrne's Man of Steel miniseries, the Toyman's history was revised, and the post-Crisis version of the character first appeared in Superman (vol. 2) #13 (January 1988). In this version, Winslow Schott is an unemployed British toymaker who blames Lex Luthor and his company, LexCorp, for being fired from the toy company he is working for. He uses his toymaking talents to seek revenge, which eventually causes him to cross paths with the British hero Godiva, and subsequently, Superman himself. The Toyman continues to commit various crimes in Metropolis, including engaging in child abduction. The Toyman later became a much more sinister figure, shaving his head and getting advice from "Mother". He developed a hatred of children, as he blamed them for not appreciating his toys.

Toyman's history was later revised in Action Comics #865, by Geoff Johns and Jesus Merino. Winslow Schott tells Jimmy Olsen that he was a toymaker who lived with his wife Mary. When a businessman offered to buy his shop to expand the number of children his toys can reach, he refused. When Mary is killed in a car accident a few weeks later, Schott agrees to the purchase. However, the businessman lied and gave his technologically advanced toy plans to arms manufacturers. Schott proceeds to bomb the business with an explosive teddy bear. A twist at the end of the story reveals that Mary was just one of his firsts robotic creations.Following his first confrontation with Superman, Schott met the Prankster for the first time.[volume & issue needed] The Prankster is a cruel, callous man who commits crimes "because it's fun." He repeatedly asked Schott to "team up", but Schott refused. Schott reveals to Jimmy that the Toyman who killed Adam Grant was a robot created by Schott to replace him in the event that he was ever incarcerated and that a glitch in the robot's programming resulted in it developing a personality, (and later a hatred of children), and that Schott's repeated attempts to contact the robot resulted in it suffering from delusions of "Mother". This was confirmed in Superman Secret Files 2009.

Other faces of Toyman

Toyman in The New Adventures of Superman. 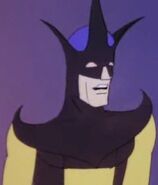 Frank Welker as the voice of Toyman in Super Friends.

Alan Oppenheimer as the voice of Toyman in Plastic Man Comedy/Adventure Show. 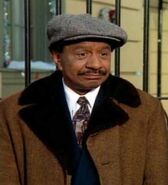 Bud Cort and Corey Burton as the voice of Toyman in Superman: The Animated Series, Static Shock and Justice League Unlimited.

John DiMagio as the voice of Toyman in Superman: Doomsday.

Richard Green as the voice of Toyman in The Batman.

John DiMaggio as the voice of Toyman in Batman: The Brave and the Bold.

Cameron Bowen as the voice of Toyman in Young Justice. 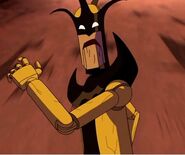 Tom Gibis as the voice of Toyman in JLA Adventures: Trapped in Time.

Henry Czerny as Winslow Schott Sr. aka Toyman in Supergirl (2015).
Add a photo to this gallery

Retrieved from "https://smallville.fandom.com/wiki/Winslow_Schott?oldid=321578"
Community content is available under CC-BY-SA unless otherwise noted.