"I don't want to be a 'remember him.' Smallville's got enough of those guys." - Whitney Fordman, Pilot

Whitney Fordman was a student at Smallville High School and star quarterback of the Smallville Crows football team. As a high school senior, he was a member of the popular crowd. He dated the beautiful cheerleader Lana Lang and he and Lana were elected Homecoming King and Queen.

After graduation, he joined the United States Marines and was killed in action in Indonesia.

Whitney Fordman was fairly tall, as well as had blonde hair and blue eyes. He was usually seen wearing his red and yellow Smallville High letterman jacket. He is shorter than Clark, by one inch.

Whitney was presented as having the "ideal" life by being the star of the football team with potential to eventually go onto a professional career with the Metropolis Sharks, as well as dating the perfect girl. As a high school freshman, Clark Kent was envious of Whitney, perceiving him to be living the high school dream. As Whitney's senior year progressed, Clark realized that his life wasn't as perfect as it seemed.

Whitney watched Clark's friendship with Lana blossom and began to see him as a competitor and a rival. He went out of his way to humiliate Clark, notably stringing him up as a Scarecrow in a cornfield in his underwear as part of a Smallville High tradition to haze the freshman class. When Clark saved his life he expressed regret for having treated him that way. Over the course of Whitney's senior year, Clark was Whitney's main rival for Lana's heart.

Whitney's primary motivation was getting out of Smallville by securing a football scholarship. As the scholarship gradually seems more unlikely, Whitney became resentful and lashed out. Whitney became a member of a gang that used meteor rock tattoos, to give them the ability to phase through walls. Clark managed to convince Whitney to leave the gang. The two eventually began to respect each other, especially when Clark made a decision to not pursue Lana romantically that year.

The death of Whitney's father, George Fordman had a great impact on his life. Upon finding medals once owned by his father from Vietnam, Whitney realized that there was more to life than high school and playing football. Whitney decided to follow in his father, George's footsteps and joined the United States Marine Corps. By the end of his senior year, Whitney went from a stereotypical jock to a well defined man, ending his friendship with Clark on good terms before departing Smallville and died a hero trying to save his fellow Marine.

Whitney Fordman is an ordinary human with no superhuman capabilities. On one occasion however, he did develop super-powers after being exposed to green meteor rock.

Whitney grew up in Smallville where he worked in the Fordman's Department Store which had belonged to his family since 1943. From a young age, he professed a love for the sport that made him a football star at Smallville High. During this time he met Lana Lang and began dating her. At the start of football season, Whitney encouraged Clark Kent to toss a football and dunk Lana Lang.[2]

Whitney Fordman was an original character, created for the show. His name might be derived from two DC characters. The first is Dan Fordman, the owner of Fordman's Department Store and the first husband of Martha Kent, in the New Earth continuity.[6] The second is Dr. Whitney. A local doctor in Smallville, who was killed and impersonated by a Manhunter agent, whom Lana (under mind control) reported to about Clark Kent.[7]

Other Face(s) of Whitney Fordman 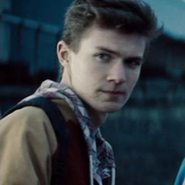 Robert Gerdisch as Whitney Fordham in Man of Steel (2013).