Wesley Dodds was a retired superhero known as Sandman and a member of the Justice Society of America. He was murdered in 2010 by a metahuman assassin known as Icicle.

Wesley wore a gas mask and a trench-coat and a black suit with a green shirt and a tie as his uniform. He also carried a gas gun with him.

Not much is known about Wesley's life, but he was a valuable member of the Justice Society of America. When the JSA was targeted by Checkmate, Wesley along with the rest of the JSA were arrested for assorted crimes that they did not commit.

During his arrest, Wesley was videotaped holding an injured or dying woman in his arms as riots exploded around him. Their arrests were apparently done to silence or shut-down the JSA.

The police, unaware of their identities as super-heroes, held Wesley and the others for days, trying to get them to roll on each other. However, in the end there was no evidence to convict them, and they were let go. Unfortunately, the events caused the group to split-up, each of them going into their own form of retirement.

Years after the splitting up of the JSA, Wesley is now living alone in Metropolis. Despite retiring from his life as a hero, he is still plagued by his prophetic dreams, causing him to fear sleeping and consuming large amounts of coffee to stay awake. However, upon finally falling asleep in his armchair, Wesley had a dream of Sylvester Pemberton being murdered by Icicle.

After awaking from his dream, he realized that he was next to be targeted. Choosing to go down fighting, Wesley once again dressed in his old Sandman costume and gas mask. As he examined himself in the mirror, Icicle appeared behind him. The young villain froze him to death, and proceeded to shoot icicles through his body. Later, Clark Kent investigated his home and found his dead body. Before his death however, Sandman managed to write "JSA" in his own blood, thus giving Clark a clue about Wesley's past.

In many of his Golden Age appearances, the Sandman's true name was given as Wes Dodd. In later stories, his surname was firmly established as Dodds. He wore a gasmask, trenchcoat and fedora. He used a gas-gun to fight crime. Wesley was a character to break much ground in his first appearance a superhero who could easily fit into pulp magazine detective stories, and unlike many heroes of his time Wesley would receive injures and gunshot wounds in battle.

Wesley was often partnered with his girlfriend Dian Belmont. It is implied that Wesley gained his powers of ambiguous prophetic dreams from the Endless, Dream who was absent from his realm of the Dreaming at the time. Wesley was also one of the first members of the JSA. He then became partnered with Dian's nephew Sanderson Hawkins who used the name Sandy the Golden Boy. During this time his pulp imagery such as the gasmask, hat and coat were dropped and he wore a more superhero costume. It had been retconed in that Sandy convinced Wesley to wear the superhero costume to help gain support of the people (abandoning the no longer canon story where Dian was killed wearing it). Wesley continued to wear the costume up until Sandy was mutated in an accident when Wesley attempted to make a more powerful silicoid gun the accident turned Sandy into a Sand based creature. Wesley had no choice bit to keep him in a cryogenic chamber that would prevent him from aging to find a cure. In guilt Wesley abandoned his superhero costume and returned to his hat and gasmask look. It would be years till Sandy would be cured.

Wesley was often involved in the team ups between the Justice League and the Justice Society he would slowly become more active again after a few years of retirement. Wesley like many members of the JSA was forced into another dimension where they would be forced to lose the same battle for years until they entered the "real world". When the Justice Society returned to the proper DC universe he appeared as a much more older and sickly man before returning to his age thar resembled a man in his late fifties early sixties by the villain Extant. At this point Wesley retired and lived with Dian only coming back into action to help the Starman Jack Knight. During this period Dian was diagnosed as terminal, Wesley and Dian spent her last days together until she died. Wesley committed suicide to prevent his knowledge of Dr. Fate from being used against him by the powerful and villainous wizard Mordru.

Sandy Hawkins now an adult became the new Sandman and operates with the JSA haunted by the same dreams Wesley had.

In his time Wesley was a skilled detective, combatant, chemist and inventor. He used his prophetic dreams to help fight crime. Wesley enjoyed reading, writing and origami.

In Pre-Crisis continuity, Wesley Dodds is credited with inventing the Ray Gun. He donated a prototype of the weapon to the 1939 New York World's Fair.

In the New 52 Wesley Dodds is a native of Earth-2. He is a Canadian “commander” in the World Army and leader of the black-ops unit the Sandmen.

During Solomon Grundy’s attack on Washington DC Dodds was the one sent in to save and extract US President Lightfoot. In order to help Commander Amar Khan take down Terry Sloan he and his team attempted to infiltrate Sloan’s research facility but were attack by brainwashed Michael Holt who took down all “the sandmen” until being taking down by Commander Dodds’s “Gas Gun”, Dodds took Holt back to the World Army for deprogramming and reported the mission to Commander Khan and promised to help him in his fight to topple “Slone”.

He with Captain Al Pratt and Major Sonia Sato were ordered to arrest The Flash and his mother at their home but the Flash refused to stand down (after Al Pratt destroyed his house without warning) and started taking down the soldiers until Wesley grabbed the Flash’s mother and threatened to shoot her if he didn't stand down, and it was working until Khalid Ben-Hassin hit Dodds over the head with a large branch and escaped by teleporting himself the Flash and his mother to the Tower of Fate.

Other faces of Sandman 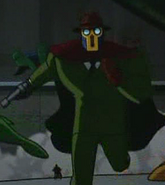 Sandman in Batman: The Brave and the Bold. 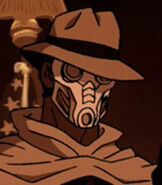 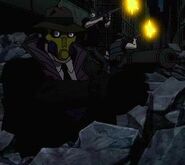 Sandman in Justice League: The Flashpoint Paradox.
Add a photo to this gallery

Retrieved from "https://smallville.fandom.com/wiki/Wesley_Dodds?oldid=318635"
Community content is available under CC-BY-SA unless otherwise noted.