Smallville Wiki
Register
Don't have an account?
Sign In
Advertisement
in: Season 11 characters, Characters in the comics, DC Universe characters,
and 2 more

Victor Zsasz is a criminal of Gotham City.

Zsasz is a young strong man, with his body all covered in tally marks he made himself. He is also bald.

Chloe Sullivan and Lois Lane arrive in Gotham City and they find Batman and Nightwing, who have been interrogating a criminal known as Victor Zsasz, on a rooftop.Batman questions Zsasz, who says he is on parole, if he knows anything about the recent murder of the young man dressed like Superman and he responds that many criminals in Gotham City don't even know how to feel about the "xeno" matter. Batman after realizing that Zsasz does not know anything about the case he lets him leave.

Victor Zsasz was the head of his own international company and had amassed a large personal fortune in addition to his family's wealth. At the age of 25 his parents died in a boating accident, sending him into a deep depression. He turned to gambling, losing money in competitions around the world. One night, he ended up in a Gotham City casino known as the Iceberg Lounge, where he gambled everything he owned and ended up losing it all to the Penguin: afterwards he saw that his life was empty, driven by desire, as well as there was no point to his existence. While he was attempting to commit suicide by jumping from Gotham Bridge, a homeless man tried to assault him with a knife after he refused to give him money. Instinctively grabbing the knife, Zsasz saw in the man's eyes that all life is meaningless and that nothing nor anyone matters. He then proceeded to stab the man to death as a "gift" for saving his life. From then on, he dedicated himself to "liberating" others from their pointless existence. He usually preys on young women, but has no qualms over whom he murders. He slits his victims' throats and leaves them in lifelike poses, adding a tally mark to himself each time. He has been diagnosed as insane and is regularly incarcerated in Arkham Asylum courtesy of Batman, breaking out on occasion to carry on killing.

During his debut appearance in Batman: Shadow of the Bat's opening story arc, Batman: The Last Arkham, Zsasz bribes a contractor to include a secret passage leading out from his cell during the asylum's reconstruction under its new head, Jeremiah Arkham, who inherited the asylum from his uncle, Amadeus Arkham. Although Zsasz is restrained during the daytime when he is being treated personally by Jeremiah Arkham, he is brought back to his cell at night where he would leave the asylum through the secret passage, unbeknownst to the night guards. After murders fitting his modus operandi begin surfacing, Batman and Commissioner James Gordon fake Batman's insanity in order to get him inside the asylum and investigate Zsasz. Jeremiah Arkham is exceptionally brutal towards Batman, who had supposedly murdered a police officer: over the course of the "treatment", Zsasz had warped Jeremiah's mind and turned him into a mere henchman. Due to these continuous conversations with Jeremiah Arkham, Zsasz realises Batman is a plant and subsequently murders both the contractor and another inmate at Arkham who knows of Zsasz's ploy. However, both Nightwing and Batman catch up to Zsasz when he tries to escape for the final time and put him back in Arkham.

Zsasz later appears in the Knightfall saga. Zsasz takes an all-girls boarding school hostage and holds the students at knife point until Batman arrives, briefly leaving to kill two police officers who were sent to arrest him. Though weakened both physically and mentally due to the strain of pushing himself for so long to capture the escaped inmates, Batman fights with Zsasz and tries to ignore the lunatic's mockery. He finally snaps, however, after Zsasz says that they are really one and the same and administers a savage beating. Later, Zsasz is being led out of the boarding school by police and Harvey Bullock personally threatening him.

During the No Man's Land storyline, Zsasz is a patient in Dr. Leslie Thompkins´ field hospital for a brief while, proving to be eminently deadly even when unconscious and strapped to a stretcher when he manages to open one of the arteries of a field orderly with his fingernails. Once he wakes up, he is confronted by Dr. Thompkins, whose utter selfless charity sharply contrasts with his total emptiness: she briefly gives him pause, but is finally repelled by his profound evil.

Zsasz is not seen in any major villainous role again until Detective Comics #815, entitled Victims. Before a quarterly psychiatric review, Zsasz kills his guards with metal poles attached to his neck bracket and escapes to kill again. Batman hunts for Zsasz, which proves unsuccessful until Zsasz gains access to a charity event (attended by Bruce Wayne) and stabs his beloved butler, Alfred Pennyworth, in the stomach. However, Wayne saves Alfred's life by driving him to a hospital. To lure Zsasz to him, Wayne holds a press conference in which he announces that Alfred is still alive. Having already made a scar for Alfred, Zsasz realises that his tally is off by one (Zsasz remarks: "My skin... it's crawling... every inch of it feels... wrong.") After a fight with Batman, Zsasz proceeds to the hospital to finish off Alfred. Batman catches him off-guard and knocks him unconscious, thus saving Alfred's life and sending Zsasz back to Arkham.

In the Battle For The Cowl storyline, Zsasz is recruited by a new Black Mask into a group of villains aiming to take over Gotham. This arrangement is explained further in a continuous story arc through the Streets of Gotham series, with Mask hiring Zsasz after he saved the former's life following a confrontation with former employee Firefly. Black Mask presents Zsasz with a briefcase filled with cash and advises him to finally live out his dream, knowing full well any 'dream' of Zsasz's would culminate in mass murder. Apprehensive at first on how to go about this, he eventually decides to take Mask up on his offer- dressing in Armani suits and purchasing a warehouse as his base of operations. During an investigation into the discovery of several children murdered by Humpty Dumpty, Damian Wayne is 'captured' by a man soliciting runaway kids with promise of a free meal and a place to stay. Damian discovers the man to be a close associate of Victor Zsasz and that Zsasz has been slowly building a financial empire using runaway children and kidnapped orphans in a 'fight to the death' arena where people bet on the winners. The winning child faces a new contestant, and so on, until the last child left fights Zsasz one-on-one, with promise of freedom for winning. Having seen the horrors that Zsasz has left, as well as a haunting memory of seeing the dead bodies of children he killed, Damian questions why Bruce or Dick have allowed a man like Zsasz to be left alive- despite their moral code against murder. Damian manages to subdue Victor and attack him viciously with a sword, after which he falls into Gotham Harbor. Not wanting to defy his mentor and late father's beliefs, he promises Dick that the blow wasn't fatal since he "missed Zsasz's spine" but indicated that his survival was slim.

However, Zsasz was later seen in captivity in Detective Comics, after Black Mask's (Jeremiah Arkham) apprehension, in Arkham Asylum. While no reference is made to Zsasz's injury (nor does he appear to be injured), his presence in Arkham alongside Jeremiah strongly suggests the events of this issue take place subsequent to the injury, meaning he did survive the attack.

Zsasz has appeared various times in The New 52 as an inmate of Arkham and he is later seen attacking Batgirl, while on Venom. He is then released from Arkham Asylum by the Joker. Later, he is hired by Ignatius Ogilvy, the Emperor Penguin, to "leave [his] mark on Gotham City", he is given a knife with Emperor Penguin's insignia on it. Zsasz is later instructed to put the Man-Bat serum on the knife, as part of Emperor Penguin's plan to turn the population of Gotham City in Man-Bats through an airborne virus. Zsasz is temporarily transformed into one.

During the Forever Evil storyline, Nightwing had just retrieved Victor Zsasz from Chicago and was bringing him back to Arkham Asylum. Victor Zsasz was then abducted by Superwoman and Owlman.

Other faces of Zsasz 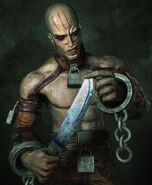 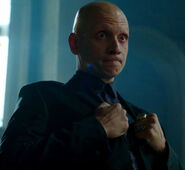 Anthony Carrigan as Zsasz in Gotham.
Community content is available under CC-BY-SA unless otherwise noted.
Advertisement