Smallville Wiki
Register
Don't have an account?
Sign In
Advertisement
in: Characters in the comics, Season 11 characters, Smallville Comic characters,
and 5 more

Thomas Wayne was the billionaire owner of Wayne Tech and the husband of Martha Wayne, and the father of Bruce Wayne. He first appears in a flashback in the second story arc of the digital/print comic, Detective.

Thomas Wayne appears to look like his son Bruce would as an adult.

Not much is known about the past of Thomas Wayne. At one point in his life, he married Martha Wayne and became the father of Bruce Wayne. Lionel Luthor tried to recruit him into Veritas but Thomas always rejected Lionel's offer. Bruce would say that his father was a giant of a man, having a similar relationship Clark Kent had with his father.

Later, he and his wife were killed by Joe Chill.

Thomas and his wife were killed by their own son Bruce Wayne, who later became a psychopathic criminal.

Father of Bruce Wayne, Thomas Wayne inherited the Wayne family fortune and became a gifted surgeon and renowned philanthropist in Gotham City. He once, coincidentally, dressed in a bat-themed costume for a masquerade ball. He and his wife Martha were later tragically murdered by Joe Chill in the area of Gotham City that would be come to be known as Crime Alley. His death happened before Bruce's very eyes.

After the Crisis on Infinite Earths, much of the DC universe was retconned. In the new origin, Bruce, then age four, fell down a fissure (or a well) that led to what would one day become the Batcave. Thomas rescued his son, but Bruce was already traumatized by bats that had been living in the cave. Later, when Bruce was eight, his parents took him to see the Mark of Zorro. Unfortunately, when they were returning from the theater, a mugger stops them and kills Thomas and his wife.

In the Long Halloween storyline it was revealed that crime boss Vincent came to Thomas Wayne to operate on his son Carmine Falcone, who had been shot during a gang fight. Thomas wanted to take him to a hospital, but Vincent disagreed, so he performed the surgery in a dining room. After the surgery, Thomas was offered a reward for saving Carmine Falcone but refused, saying that "to a doctor, a patient is a patient."

Meanwhile, young Bruce watched all this from behind. After it was revealed that Carmine Falcone was behind the holiday killings, Bruce wonders if Gotham would be better off if Thomas hadn't saved Falcone's life.

In the Death and Maidens storyline, Ra's Al Ghul offers Batman a chance to talk to his parents. Batman, hesitant at first, swallows an elixir and believes that he is speaking to his parents. Surprisingly though, both his parents disapprove of Bruce's costumed crusade, believing that Bruce had sacrificed too much and his chance of happiness by becoming Batman. As they leave, both of them assured him that the lessening of his grief does not mean he (Bruce) no longer cares for them. After his experience, Bruce realizes that he is Batman only because he chooses to be, not because he has to be.

In Flashpoint when the Reverse Flash disrupts the natural flow of the New Earth timeline (The DCU's main continuity) and the initiates the events of Flashpoint, the past is radically changed. Rather than Thomas and Martha Wayne being gunned down by Joe Chill, it was Bruce that died in crime alley that fateful night, leaving Thomas Wayne alive and broken. Dr. Wayne ages into a very bitter, argumentative, and lonely man, who owns a chain of hotels and Wayne Casino. He has taken on the Batman mantle himself, but unlike Bruce has no qualms about killing. Wayne uses his Casino, run by his employee Oswald Cobblepot, as a front to keep and eye on the villains, gangsters, and criminals it attracts. Furthermore, the Gotham City Police Department is privatized and under Thomas' control, with his friend James Gordon being the head of it. Gordon is aware that Wayne is Batman. Operating out of a small Batcave under a ravaged and time worn Wayne Manor, Thomas takes to the city streets at night as a brutal and homicidal Batman. It is noted that The Scarecrow, Hush, and Poison Ivy are all dead in this timeline, more than likely having been killed by Wayne. The Joker is still the Batman's greatest foe, and while on his greatest nemesis' trail in search of DA Harvey Dent's kidnapped twin children, Wayne viciously kills Killer Croc by stabbing him in the head and nearly kills Harley Quinn by dropping her off a skyscraper.

With help from both Gordon and Selina Kyle, the Oracle of this timeline, Wayne vigilantly searches for the whereabouts of the Dent twins before The Joker can harm them. Gordon discovers that the Joker is holding the children hostage in none other than the dilapidated Wayne Manor. Instead of relaying his discovery to Batman, Gordon rushes in to the Manor alone to save the children. Through the use of a cruel and convincing trap, The Joker tricks Gordon into accidentally shooting one of the kidnapped twins. Upon realizing his terrible mistake Gordon runs to the aide of the devastatingly wounded child, when the Joker appears behind him and slits his throat. With help from Selina, Wayne realizes that he must get to the Manor. He arrives too late to help Gordon or the injured Dent twin, and angrily confronts the Joker who is revealed to be none other than Martha Wayne.

Other faces of Thomas Wayne 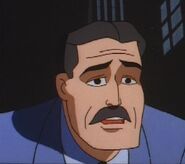 Kevin Conroy as the voice of Thomas Wayne in Batman: The Animated Series.

Kevin Conroy as the voice of Thomas Wayne in the Batman: Arkham Asylum (2009). 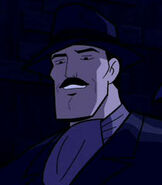 Corey Burton, Greg Ellis and Adam West as the voice of Thomas Wayne in Batman: The Brave and the Bold. 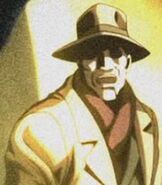 Jason Marsden as the voice of Thomas Wayne in Batman: Gotham Knight.

Bruce Timm as the voice of Thomas Wayne in Batman: The Dark Knight Returns.

Kevin McKidd as the voice of Thomas Wayne/Batman in Justice League: Flashpoint Paradox.

John Noble as the voice of Thomas Wayne in the Batman: Arkham Knight (2015).

Be. Aldridge as a young Thomas in Pennyworth. 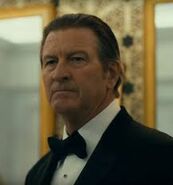 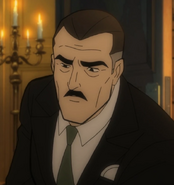 Robin Atkin Downes as the voice of Thomas Wayne in Batman: The Long Halloween (2021)

Luke Roberts as Thomas Wayne in The Batman (2022)