This article is about Tess of Earth-2. For her Earth-1 doppelganger, see Tess Mercer.

"You're a Luthor?" - Clark Kent to Tess Luthor, Luthor

Lutessa "Tess" Lena Luthor was Tess Mercer's doppelganger from Earth-2. She was Lionel Luthor's disowned daughter and Clark Luthor's adoptive sister and lover. She was later revealed to have died along with the rest of Earth-2.

In an alternate Earth where Lionel found the Traveler in Smallville and raised him as his son, Tess grew up knowing that Lionel was her father and that Lex was her half-brother. She (Tess) was raised by him (Lionel) but was disowned because she was not "special".[1]

Despite being adopted siblings, Tess was having a passionate affair with Clark and together planned to use Lionel's mirror box to escape to Earth-1 and make it their own. When Clark Kent was sent to this darker Earth, Tess did not take long to realize that they were not the same person and helped Clark realize what happened.

After trying to get information about the Kryptonian device from Lionel's office, she was discovered by him and after Lionel insulted her by calling her a disappointment, a half-breed tramp and just not special enough she is visibly hurt by the comments and screams at him in rage where Tess claims that he never loved her and demands to know why he never cared about her, she was arrested by security for having slapped Lionel and is dragged away still yelling at Lionel.

It is mentioned by Earth-2's Chloe Sullivan that the planet was destroyed, meaning Tess died as well.

In Silver Age continuity, Lena is Lex Luthor's younger sister. After Lex began his villainous career, his family changed their last name in shame to the anagram "Thorul". As a result, Lena never knew she had an older brother, as Lex Luthor himself worked to keep her from learning the truth. Lena had psychic/empathic abilities, gained from touching a space brain, Luthor was experimenting on before he became a villain. She lost her powers after brain surgery, and the decision was made to tell her the truth about Luthor. After the initial shock, there were signs of reconciliation after Luthor discovered he had unwittingly aided another criminal's conspiracy against Lena, and he was deeply apologetic. Lena later married a man named Jeff Colby with whom she had a son, Val. Like many minor characters, Lena as Lex' biological sister was removed from comic continuity following the event of the Crisis on Infinite Earths.

In Final Crisis, Legionnaires Polar Boy, Wildfire, and Dawnstar travel to Smallville during the 20th century, back to when Superman was still a suburban legend. The three heroes arrive to the Luthor household, where they hear a young Lex Luthor arguing with his father about his mother and sister, indicating that the Pre-Crisis Lena has been restored to the Post-Crisis continuity.

Unlike her Silver Age counterpart, Lena grew up alongside Lex, until he left Smallville. Lex made certain to cover-up his Smallville history, and that included disavowing a connection to his sister. Lena is now an invalid, living in Smallville with her daughter Lori. Recently, Lori made friends with Superboy, but both were shocked to find Luthor on Lori's doorstep, intent on taking control of Superboy again, and claiming he can cure Lena's condition. With Superboy's help, Luthor indeed cures Lena, but he then undoes his cure, claiming he only helped her to prove to Superboy that he could and that so long as Superman lives, he will never reveal how he did it. Currently Lena is under the care of Wayne Enterprise doctors, thanks to Red Robin.

Even after the Crisis on Infinite Earths a new Lena was introduce Post Crisis, as the child of Lex Luthor and Contessa Erica Del Portenza. She is named after Lex's foster sister who had been killed by their foster father, Casey Griggs. After Lena's birth, Lex takes advantage of Contessa Erica's wish to be unconscious at child birth by keeping her permanently drugged and unconscious at his corporate headquarters, not wishing to share his daughter's love with anyone else.

When Brainiac 13 arrives from the 64th century, the modern Brainiac possesses the infant Lena to escape it. Even after Brainiac leaves Lena's body, Luthor trades her to Braniac 13 for control of the future technology that has transformed Metropolis. Lena returns to visit Lex during the Our Worlds at War crossover, where she has apparently been aged by Brainiac 13. Lena plays a sneaky role during the event, helping Luthor and his allies beat Imperiex by feeding her information, while secretly manipulating events to benefit Brainiac 13. She is ultimately convinced at the end to side with her father. At the end of the crossover, Brainiac 12 and Imperiex are both destroyed, and Lena is regressed to infanthood and returned by her father by, who tells Luthor that he now has a second chance to try to be a man instead of a god.

Following Our Worlds At War, Lena appears infrequently, sometimes shown as still Brainiac discs on her forehead. In the Superman's Metropolis miniseries, the artificial intelligence controlling the B-13 technology believes itself to be Lena Luthor. When it creates a human body (female, but bald) to pursue a romantic romantic relationship with Jimmy Olsen, Superman confronts her with the real Lena Luthor, making her realize her personality is a computer simulation of Lena's. Lena has not appeared since Luthor lost the presidency, and her current status is unknown.

In the New 52's title Forever Evil, Lex Luthor mentions that when he was a child he tried to save his sister's cat, which had gotten itself stuck up an old white oak. According to him, Lena's incessant pleading motivated him to the rescue but when the cat scratched Lex, he threw it into the river. At some point later, Lex mentions that he used to run when older kids would chase him and his sister, calling them names and holding them in contempt for their father's reputation and sometimes they weren't fast enough so Lex would stop and tell to his sister to keep running, to hide in the field until it was over. At some point, during Lex's teenage years, Lena grew ill and Lex thought he could save her but he didn't try, fearing that he would fail to help the only person in his life that ever meant anything to him, so unfortunately, Lena died later that year.

Lex later reveals that the story about Lena was a lie. He tried to cure her from her illness but he failed and she was left an invalid. Not wanting to admit that he failed he lied about her. He later calls Lena saying that he knows it has been a long time but he wants to go and visit her.

Lena makes her first appearance in Justice League #35. After the announcement of LexCorp and Wayne Enterprises' partnership, Lex shows to Bruce Wayne the inside of his company. When Bruce asks Lex to show him his private lab, Lex hesitates so Bruce asks him what is in there? Lex reveals that his paralyzed sister, Lena, was waiting for him in the lab, while previously watching the event on TV. Lex then introduces Lena to Bruce. Later, as they continue the tour, Lex says to Bruce they have to stick together against the metahumans of this world. Bruce asks how can he trust a man, who deserted his own sister? Bruce reveals that he knows all about Lena and that he actually knows the truth, that Lex tried to cure her but failed and because he couldn't stand the reminder of that failure he just left. Lex then says that he is going to cure Lena this time. Suddenly a villain named Neutron, who was paid to kill Luthor, attacks the part of the LexCorp building, where Lex's lab is, hurting Lena and leaving her unconscious. Lex and Bruce immediately run towards Lena and Lex says she is still breathing, so he tells to Bruce to get her out of there while he is running to his armor. Bruce holds Lena while the Justice League battles Neutron but suddenly Lex finds out that a storage unit at his lab has been breached due to Neutron's attack so the Amazo virus, which was inside the unit, now begins to infect everyone.

Other faces of Lena Luthor

Jennifer Hawkins as the young Lena Luthor in Superboy. 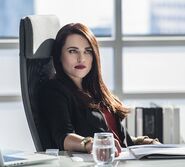