Smallville Wiki
Register
Don't have an account?
Sign In
Advertisement
in: Season 10 characters, Characters in the comics, CEOs,
and 4 more

Alive
Ted Kord is the founder and CEO of Kord Industries, a military contractor that works for the US government.

Along with their documented projects, Kord Industries secretly works to acquire and depower or disarm super-powered weapons.

Among the weapons being researched by Kord was an extraterrestrial object in the shape of a blue scarab beetle. The device bonded with one of Kord's researchers (Dan Garrett), who killed three people before he was himself killed trying to remove the scarab. Kord then lost the scarab when an automobile accident was prevented by Booster Gold.

After this happened, Ted was questioned by Clark Kent about the danger that this missing weapon imposed. Ted wondered how Clark knew it was a weapon, but when Clark doesn't answer, he tells him to leave. Ted then calls Booster Gold hoping he could retrieve the weapon. Booster agrees under the condition that Ted uses his relationship with the mayor to get him the key to the city, to which Ted complies.

Upon locating the scarab bonded to Jaime Reyes, Kord noted that Jaime is unique in his ability to control the device. At Jaime's request, Kord allowed him to keep it.

It is revealed that Kord Industries, along with WayneTech and Michael Holt's company, have employees in Antarctica working on the Super Collider, and also Jamie Reyes, whom employees are calling "Kord's kid with the bug on his back". Booster Gold and Skeets are on retainer for him.

In Antarctica, Lois is touring a Higgs Boson supercollider facility created by the combined efforts of Michael Holt and Ted Kord, with the financial assistance of Bruce Wayne. As proud as they are of their accomplishments, they tell Lois that none of it would've been possible without the last minute contribution of Lex Luthor. Lois warns them that no one should trust Lex. However, Luthor calmly tells his partners that he is only there to give.

Sadly, things don't go as planned for Kord and Holt, because when the scientists start the experiment, a violent gateway opens pulling everyone and everything into the Bleed, the rift between parallel universes, with Lois clinging to a railing. The only one who seems happy about the incident is Lex who obviously has planned everything.

After the portal is closed by Holt, with Superman and Lois already been pulled in, Ted wonders where they went and Lex remarks he's just killed two birds with one stone.

Lex is ready to leave, saying to Kord and Holt that "he's out" as the facility is unstable, given the fact that Superman and Lois Lane disappeared. Holt says their own private security, Booster Gold, can escort his plane back to domestic airspace but Lex reveals that he lied to them and that he intends to buy Holt and Kord out. Kord says they are not selling but suddenly Lex's private security, which is revealed to be powered by rings of the Yellow Lanterns, fires at them and Lex then says they should consider it more of a hostile takeover.

Lex demands from Kord and Holt to give him the access codes for the equipment but they refuse saying that he killed Superman and Lois Lane. Lex insists his actions are to save the world and commands his security force to shoot both men when they refuse him again.

Lex continues his hostile takeover of the Antarctica facility, convinced his actions are for the greater good of the universe. He forces the wounded Kord and Holt to work on the equipment and put it back on track.

Lex visits Kord and Holt, who say the proper adjustments are in place with the super collider to accommodate Lex's alien tech. After that, Lex's Lanterns imprison the two scientists once again along with Booster Gold, and Lex orders Otis to activate the machine so they can make some history.

Later the Lanterns suggest to kill the prisoners instead of keeping them locked up like Lex ordered them. Kord also watches as a Lantern murders another one.

The Yellow Lanterns prepare to execute Ted Kord, Michael Holt, and Booster Gold, saying to them that it's not personal. Luckily, Skeets arrives just in time and attacks them with a set of cables that spring from its "body", distracting the Lanterns. Kord and Holt use the opportunity to incapacitate the men and then Skeets takes their rings. Holt and Kord help the beaten Booster Gold to stand up and comment that they might have been paying the wrong guy for the job, in which Booster Gold agrees.

Theodore Stephen "Ted" Kord is the second Blue Beetle, a superhero who was originally published by Charlton Comics and later picked up by DC Comics.

Ted Kord was sometimes shown as an industrialist, the owner of KORD Industries; more often he was short on money, leading to his entering "get-rich-quick" schemes with Booster Gold. A brief appearance in JLA: Year One showed the young Ted working in Kord Industries R&D, where he designed the JLA HQ security system. Upon meeting the heroes, he thought, "Screw the family business. I want to be one of those guys," possibly explaining the company's fluctuating status since he took over. In recent comics, it has been implied that KORD Industries has become a subsidiary of Wayne Enterprises, headed by Bruce Wayne.

Blue Beetle is probably best known as the wisecracking member of Justice League of America titles (notably Justice League International), where he was memorably partnered with fellow third-string hero Booster Gold, and the two quickly became best friends. For a while, Beetle grappled with a weight problem, but with sheer determination and coaching from the hero General Glory, as well as competing against Power Girl, he defeated it. In "Death of Superman" storyline, Doomsday left Blue Beetle in a coma during his murderous rampage, as well as a six-inch scar on the back of his skull. Beetle and Booster both subsequently joined the short-lived Justice League offshoot known as Extreme Justice.

Ted made several appearances in Birds of Prey, at first as Oracle's internet friend and later in person. It was hinted in several issues that Ted had a crush on Oracle. Ted had gone back to his company, but still had many, many problems with it; problems Oracle tried to help resolve. During this time, it was revealed he had a heart condition (he had actually experienced multiple heart attacks while in action without noticing), but this did not stop him from assisting when it was needed.

In Countdown to Infinite Crisis, Blue Beetle discovers a revived Checkmate organization led by Maxwell Lord, former bank roller of the JLA, headquartered in a Belgian castle fortress, where Beetle is captured. Lord reveals to Blue Beetle that his intent is to use the organization to ensure that metahumans, including superheroes, will be kept under surveillance and controlled by humans. Lord then gives Beetle an ultimatum to join his organization. When Kord refuses with the reply, "Rot in hell, Max," Lord murders him with a bullet to the head.

After his death, the Birds of Prey visited a statue in Valhalla Cemetery built in his honor. Black Canary revealed that being in the JLA was only fun when Blue Beetle was there. Oracle revealed that she had had a cyber crush on him.

The death of Ted Kord precipitated the events of Infinite Crisis. Max Lord was revealed as a villain and took telepathic control of Superman, which led to Wonder Woman being forced to kill Lord. Captain Marvel had warned Ted about Lex Luthor, who supposedly straddled the worlds of magic and science.

In Blackest Night, when a Black Power Ring reanimates Ted Kord's corpse as a Black Lantern, Black Lantern Blue Beetle is unable to locate Booster Gold due to his new time-travelling duties. He lures Booster into the open by targeting Daniel Carter (Supernova) and Rose Levin, Booster's 21st century ancestor. He is able to successfully pierce the Supernova costume shields with a Black Lantern BB gun, and holds Supernova in place while beating Blue Beetle (Jaime Reyes) and staving off Skeets' attack until Booster Gold arrives. He then moves in for the kill, hoping to rip out Booster's heart.

After the "Blackest Night", they find evidence at the KORD Industries warehouse of somebody else entering the warehouse, even though the doors were genetically coded, with only two people cleared for access: Booster Gold and Ted Kord himself.

In the New 52, Ted Kord is reintroduced in the final pages of Forever Evil. At the beginning of the story, Lex Luthor kills the owner of Kord Industries, Thomas Kord, Ted's father, as part of a plan to acquire the company. Lex later undergoes a change of heart after encountering the Crime Syndicate. Lex Luthor later promises Ted Kord, a young grad student, that he will not be acquiring Kord Industries despite Ted's desire to sell it to him. Lex compliments Ted on his genius with nanotechnology and offers him his assistance should he ever need it again. Ted thanks Lex and praises him for living up to his reputation for benevolence.

Other faces of Ted Kord 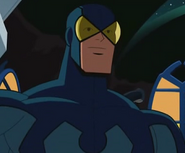 Wil Wheaton as the voice of Ted Kord/Blue Beetle in Batman: The Brave and the Bold.