Smallville Wiki
Register
Don't have an account?
Sign In
Advertisement
in: Season 9 characters, Characters in the comics, DC Universe characters,
and 3 more

Theodore "Ted" Grant is a retired superhero known as Wildcat and part of the Justice Society of America.

Very little is known about Ted Grant's early life. In his youth, he became a professional boxer, eventually at some point earning the title of "Heavy Weight Champion". Using his fighting talents, he later became the costumed mystery man, known as "Wildcat" and a member of the Justice Society of America. Despite his duties as a member of the JSA he continued his career as a boxer, even opening his own gym.

Ted's heroic career ended when he along with his fellow JSA members were all framed by a government agency and arrested. However, he was never convicted due to a lack of evidence and was eventually released, together with the rest of his teammates. Unfortunately, their arrests led to the JSA dismantling and each of them going into retirement.

Black and white footage of Ted was found, along with his criminal record by Clark Kent and Chloe Sullivan, in 2010. Chloe recognized Ted as a heavyweight champion (suggesting, Ted Grant continued his boxing career, after having retired as Wildcat). Later, Ted's boxing gloves were shown in a display case, in the JSA Brownstone. Following the defeat of Icicle, Carter Hall mentioned that he's tracked down Ted, and also that many of old JSA now have children and proteges of their own, implying that Ted may in fact have a child.

Ted Grant is a normal human who was, at some unspecified point, magically given nine lives. He remains at the peak of human condition due to extensive, regular exercise. He is a world-class boxer who trained Batman, Black Canary, and even Superman in the art. He was trained to fighting condition by ex-boxer Joe Morgan.

Henry Grant vowed on his baby son's crib that the child would not grow up afraid of life, and so he encouraged his son in sports and paid for coaching that would have continued into the young man's college days except that both Henry Grant and his wife died. Orphaned in the days of the Great Depression Ted Grant found himself unemployed in the big city. One night he saved "Socker" Smith, the heavyweight boxing champ, from a mugging. "Socker" took Ted under his wings and soon Ted was a heavyweight champ in his own right. He also unknowingly became tangled in his manager's sinister plans. As a result, his mentor "Socker" Smith was killed by a boxing glove loaded with a poison needle by Grant's managers Flint and Skinner. The dose was only intended to slow Smith, but the duo misjudged the potency. When Grant was arrested for the crime, Flint and Skinner, afraid he might know what had happened, arranged a hit on the young fighter. Ted Grant survived, but the policemen with him were dead. He became a fugitive and came upon a kid who was robbed of his Green Lantern comic. The kid, describing the mystery-man Green Lantern, inspired Ted to create a costume of a large black cat. He took the name of Wildcat and vowed to clear his name. He brought Flint and Skinner to justice, and the villains were forced to confess and Grant's name was cleared. Wildcat continued to fight against crime.

In the pages of All Star Comics Wildcat had a few adventures as a member of the Justice Society of America and in the 1980s when the All-Star Squadron was published and created a retroactive continuity in which the majority of WWII mystery-men interacted with each other, Wildcat had a place as a member of that conglomeration of heroes as well. The 1970s run of All Star Comics (1976–1979) had Wildcat play a central role as a Justice Society member. In the story arc which saw Green Lantern go berserk and Commissioner Bruce Wayne issue arrest warrants for the JSA, it was Wildcat's ability to look fear in the face that allowed him to defeat the mastermind of the disaster: the second Psycho-Pirate. In 1985, during the Crisis on Infinite Earths, Ted's legs were shattered by an out-of-control Red Tornado and he was told he would never walk again, but he soon discovered he had a god-daughter, Yolanda Montez, who became the second Wildcat.

An Earth-One version of Ted Grant existed pre-Crisis and teamed up with Batman on several occasions, himself a retired world heavyweight champion like his Earth-Two counterpart. This Grant had a relatively minor career, and much of his early years were left unchronicled as to his origin, although his origin is likely similar to the golden age Ted Grant. This version of Ted Grant ceased to exist following the events of the Crisis on Infinite Earths, with the Earth-Two version becoming the dominant version on the new unified universe, although it was still said Post-Crisis that Batman received some training from Ted Grant.

In the post-Crisis reboot, Ted Grant's injuries sustained during the events of Crisis on Infinite Earths were downgraded from paraplegia to less severe injuries that Ted quickly recovered from. He was also still a former heavyweight champion of the world. In addition, Ted is credited for being an expert at several other martial arts, including Krav Maga, Hapkido, Muay Thai, and Capoeira, though he prefers to trade punches as part of his brawling style. Even in his advanced years, Ted has, on several occasions, knocked out experienced fighters with a single punch.

After the Crisis, Ted was present when the JSA willfully exiled themselves into Limbo in order to prevent the Norse Mythology event known as Ragnarok as part of a time loop. He remained there for several years until he was freed with the rest of the JSA in Armageddon: Inferno. He was present during the Justice Society's disastrous fight with Extant during Zero Hour and fell victim to Extant's time manipulation powers, which restored Wildcat to his proper age of being an elderly, sickly man.

In the wake of Zero Hour, Wildcat retired from active crimefighting and became a full-time trainer again in his role a professional boxer. In private, he continues to train younger superheroes in martial arts. It was in the wake of Zero Hour as well, that new details were revealed about Wildcat's past: one was the existence of two sons. One of the sons, Jake was stolen from the two by one of Ted's enemies, the Yellow Wasp as a replacement for his own biological son, who the evil scientist transformed into a half-wasp, half-human abomination. Another son, Tom Bronson, was conceived in a one-night stand after stopping the Gambler shortly after Wildcat came out of retirement. Though Ted knew about Tom, he did not enter the boy's life until recently when the villainous Vandal Savage began systematically murdering the children and grandchildren of the Golden Age heroes and heroines. It was revealed that Tom is a metahuman and he later became the next Wildcat.

Ted also had torrid affairs with Selina Kyle, whom he briefly trained, as well as an affair, during the 1940s, with Queen Hippolyta.

Other faces of Wildcat

Stephen Root as the voice of Cat Man (a character created as a homage to Wildcat, with elements of Batman) in Justice League.

Dennis Farina as the voice of Wildcat in Justice League Unlimited. 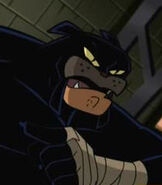 R. Lee Ermey as the voice of Wildcat in Batman: The Brave and the Bold. 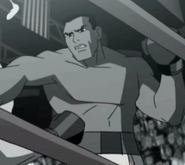 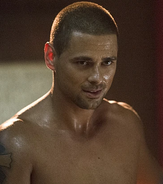 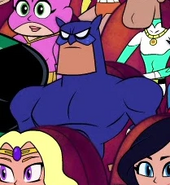 Ted Grant/Wildcat in Teen Titans Go! To The Movies (2018) 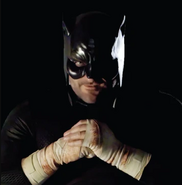