Smallville Wiki
Register
Don't have an account?
Sign In
Advertisement
in: Season 9 characters, Characters in the comics, DC Universe characters,
and 6 more

Deceased
Sylvester Pemberton was a retired hero known as the Star-Spangled Kid and a member of the disbanded 1970's group 'The Justice Society of America'.

On his own, Sylvester had no superhuman abilities, but he was a highly skilled hand-to-hand combatant. His powers came from his Cosmic Control Staff. His staff gave him control over the elemental power of light. After his death, the artifact was passed on to his successor, Courtney Whitmore aka Stargirl.

Very little was known about Sylvester Pemberton's early life. In his youth, Sylvester somehow came into possession of a Cosmic Staff, and assumed the guise of the masked mystery man, known as the Star-Spangled Kid. He worked alongside a man named Patrick "Pat" Dugan, who became known as Stripsey.

He later became a member of the Justice Society of America. Eventually, Sylvester was framed by a government agency, for stealing from his own company and was arrested. Just like the rest of his friends, Sylvester tried to take the blame and exonerate the others. Due to evidence of jury tampering and missing witnesses, the police couldn't hold them and Sylvester was released from custody.

Later, Sylvester gave his costume and equipment to his old sidekick, Pat Dugan. Who stored them, in a footlocker, until his stepdaughter found them and decided to use them, as a means to annoy Pat, by becoming a super-hero on her own. Sylvester found out about her and decided to take her under his wing and train her. Sylvester also gained information, regarding several other, new super-heroes that were emerging. Which sparked a desire in Sylvester, to create another Justice Society, composed of the old JSA:ers and the new kids.

Sylvester Pemberton approached Chloe Sullivan in a deserted alley and introduced himself to her. He told her he knew about her team of superheroes and said he was once in a society too. When he heard a strange sound, he threw Chloe into a dumpster and told her to stay there. The temperature dropped and Chloe remained in the dumpster as there was a fight going on outside. Being thrown around inside, Chloe tried to see what was happening outside when the noise stopped. After getting out, she knelt next to Sylvester who was stabbed all over his body. He kept repeating the word "Check" but died before he could tell her anything else.

The original Star-Spangled Kid was Sylvester Pemberton. He became the Star-Spangled Kid in order to battle Nazi spies and fifth columnists during World War II. He was unique in that he was a kid superhero who operated with an adult sidekick, Stripesy a.k.a. Pat Dugan. Both he and Dugan were superb acrobats along with having sufficient training in hand-to-hand combat. They built the Star Rocket Racer, a bubble-topped limousine with the functions of a rocket and helicopter.

Sylvester then joined the JSA, at which time a then-injured Starman (Ted Knight) loans him his cosmic rod (it was later revealed that Starman wanted the young man to become his heir as neither of his sons expressed interest in carrying the mantle). Soon afterwards, the Kid refined the technology of the rod, devising a belt with similar powers such as energy projection, flight and matter transmutation. Eventually Sylvester retired from super-heroics to reclaim his inheritance, his father's business, from his corrupt nephew. In addition, patched up his long since neglected relationship with Dugan.

Sylvester eventually changed his name to Skyman and took leadership of the team Infinity Inc. During this period he formed a partnership with the city of Los Angeles to commission the team as for-hire protectors. He also purchased property to revitalize related movie production facilities.

In the series 52, Lex Luthor buys the rights to Infinity Inc.'s name from the Pemberton Estate and gives the codename 'Skyman' to a new superhero. The new Skyman has a relationship with Natasha Irons, and is portrayed as one of the more sincere heroes in Luthor's Infinity Inc. He is killed and replaced by the shape-shifting Everyman.

Other faces of Sylvester Pemberton 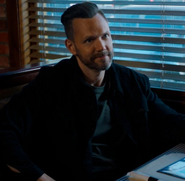