"So much better in Technicolor.'" - Lois Lane, Lazarus

The Superman Suit is an outfit worn by Clark Kent as Superman.

The original Superman suit was given to Clark, by his adoptive mother, Martha Kent. The outfit consisted of an unknown material. It brought back the original red and blue colors of the Blur. The main part of the suit was a blue unitard with red trunks and a yellow belt. Like Clark's earlier last two Blur suits, the suit sported the crest of the House of El on the chest. The outfit was completed with a large red cape, with another House of El crest in yellow on the back and red boots. 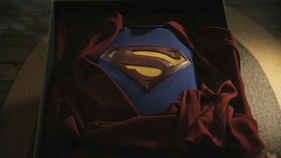 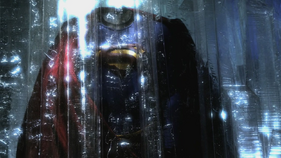 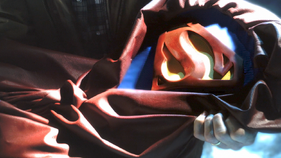 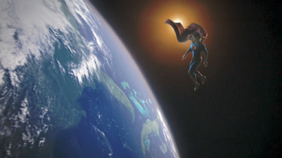 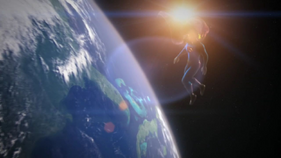 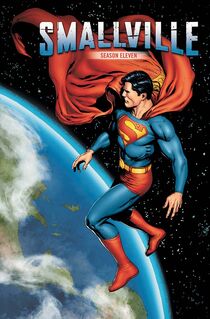 About six months, after he had donned the original Superman suit, Clark updated his look with a new suit. This new suit got rid of the red trunks. It had blue-gray bands running lengthwise along his sides from under the arms to his boots. It had a red belt with a gold buckle. The belt buckle had a built in communication device for Watchtower, and has a holo-computer. It kept the House of El crest of on back, but it was now in dark silhouette, rather than yellow. The new crest on his chest had lead built into it, to protect him from getting shot with Kryptonite bullets. 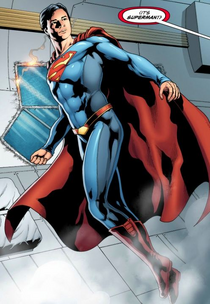 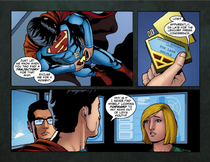 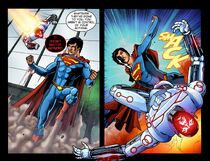 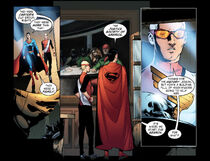 Facing the threat of the Black Flash, Clark was issued a temporary suit by Emil Hamilton. Emil took the concept of sending Clark into the sun to remove his irradiation to fashion a containment suit. He then modified the suit to collect speed energy so Clark could be able to use it to constantly move fast enough to confront the demon. This costume is half black half electric-blue, covering all of his body and with a bright House of El emblem on the chest. 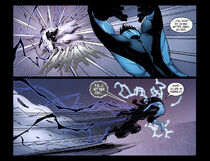 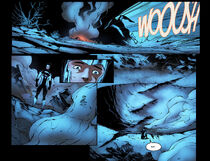 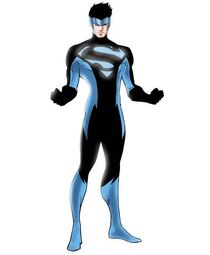 When Clark found himself drafted into the Green Lantern Corps, his Power ring issued him with a new black and green suit. The suit covered all of his body except from his face, underneath the energy contracted green details of his costume, which included bracelets, boots and the emblem of House of El, instead of that of the Green Lanterns, on his chest, which expanded into a big armor covering his chest, neck, belly and shoulders. 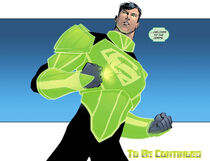 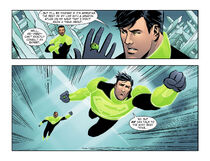 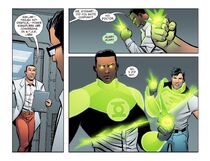 By 2017, Clark had once more upgraded his suit. Little is known about this outfit. However, it saw the return of the yellow crest on the cape, while the suit itself got rid of the blue-gray bands. 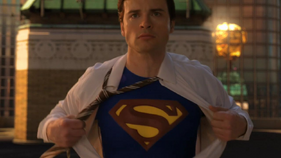 Over the years since his introduction, Superman has had several versions of not only his origins and history, but also the creation of his costume. In some versions, Clark's uniform was normal material that became invulnerable through physical contact with his body, while in others the costume's invulnerability was a result of the fabric itself being from Krypton. However, nearly all versions have had Martha Kent acting as the designer behind the costume, either by her own imagination or through inspiration that she and Clark gained from his Kryptonian heritage.

Most recently, Clark's origins have been retold in Superman: Secret Origin by Geoff Johns, which has been stated as the "definitive" origin story of Superman. Secret Origin combines various aspects of Clark's Silver Age origins while still incorporating various twists from John Byrne's 1986 The Man of Steel mini-series. As a result, Clark's costume origins have also be retold using a combination of each different era, including certain aspects from Mark Waid's 2003 and 2004 Superman: Birthright.

When Clark decided he was going to use his powers to help humanity, Martha creates the costume using the material from the red, yellow and blue blankets baby Kal-El was wrapped in when she and Jonathan found him. Martha does this because she realizes that ordinary clothing isn't durable enough for Clark when he's out there saving lives by using his abilities. Usually his clothes get ripped, shredded, stained, frozen and even burned in the process. The reason Martha uses the material from the blankets to form the suit is because it appears to share the same invulnerability properties as Clark which she had discovered when a small fire had occurred in the attic, Jonathan managed to put out the fire before it had a chance to spread out quickly and engulfed all of their possessions. He then made a startling discovery that Clark's red baby blanket shielded all of Clark's baby items that were wrapped around it, but everything else that wasn't wrapped in one of Clark's blanket was burnt up. Jonathan tells Martha about his discovery and Martha gathers all three blankets and stores them in her chest box for a time she believes they'll come in handy someday. Martha get the inspirational design for the look of the suit from the Kryptonian clothing style she had seen in the holographic imagery coming from the sunstone crystal that houses the entire Kryptonian heritage that Jor-El and Lara had placed in Kal-El's ship for him to learn about his heritage.

With Martha's amazing sewing skills and Clark's heat vision to heat-weld the seams together, the suit begins to take shape. The suit consists of a blue costume complemented by red trunks, red boots and a long, flowing red cape. A yellow belt encircles the waist, and there is a highly stylized insignia of the family crest of the House of El consisting of a large red letter "S" inscribed within a yellow pentagon shield, which is bordered in red emblazoned on the chest. The back of the cape bears the House of El insignia except that this one consists of a yellow letter "S" inscribed within a yellow pentagon shield bordered in yellow. Clark choose not to wear a mask with his hero outfit because he wanted to earn peoples trust and by seeing his face, no one would ever suspect he has something to hide.

In addition to making Clark's Superman suit, when Kara arrives on Earth and decides to follow in the footsteps of her cousin as a superhero, Martha designed a Supergirl costume tailor-made for her as well. Martha also designed a cape specifically for Krypto to wear around his dog collar with the traditional yellow pentagon "S" engraved on the cape. She also made it possible for the cape to be hidden beneath the collar for when Krypto wasn't on duty as the Superdog. It can be assumed that although Superboy (Conner Kent) no longer wears a tradition uniform (instead using a t-shirt and jeans), Martha is responsible for creating his black t-shirts with the S-shield on them.

For a period of time, Clark lost his normal Kryptonian abilities and instead gained electricity-based powers. In order to control these powers and to keep Clark from destroying himself as a result, Lex Luthor and his then-wife, the Contessa, designed a fabric that would contain Superman's then-uncontrollable abilities. Dr. Emil Hamilton had the fabric designed into a blue and white uniform. After donning the costume, Clark flew to the Kent Farm, where he showed it to Martha and Jonathan. Martha, while impressed with the suit, felt it lacked something, and suggested that Clark add an alternate version of the House of El shield, that looks more like a lightning bolt than a letter. Clark would use this suit for a short period, until returning to his standard powers and costume.

In the New 52 universe, Clark once again didn't begin wearing a costume until early adulthood. As a kid he only wearing his cape as well as a blue t-shirt and jeans when he helps people in secret. Becoming Superman before his powers are developed to the point of flight, he wears a cape over jeans and a t-shirt with his emblem which he wears when When he's working for the man on the street, doing every day stuff. Superman travels to the ship to find many alien bottled cities, Kandor included. The alien identifies himself as a being from the planet Colu where he was known as C.O.M.P.U.T.O and on Krypton he was called Brainiac 1.0. He claims that without Superman and the ship that brought him to Earth, his Kryptonian collection is incomplete, and for that he must pass a test: pulling the life support of both the Kandor and Metropolis bottles, he must decide which city to save, using indestructible Kryptonian armor he also preserved. Superman decides on neither and wears the Kryptonian armor (which instantly morphs in the familiar Superman costume and later only wears it when, but when he's facing intergalactic threats as well as when he's with the Justice League, the suit's durability comes in handy, and likewise symbolizes his family, his heritage).

In DC's rebirth reboot continuity, The Original version of Superman (Pre-Flashpoint) has returned taken up the reigns after the death of New 52's Kal-El. His new suit is a mixture of the classic elements with an incorporation of his counterparts design. the suit is a one-piece outfit that is cloth fabric instead of armored. The red trunks are gone as well as the Red boots. The Cape once more house the yellow plated House of El insigna upon it. The Belt is red with equipped with a homing beacon and two-way communicator device.