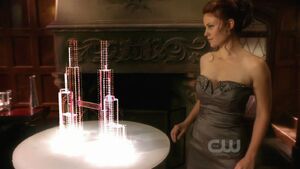 The Solar tower was a beam that was supported by two-outer buildings. It was built by Tess Mercer and LuthorCorp, with the help of Major Zod and R.A.O. Incorporated.

According to Tess, the Solar Tower was the world's first completely self-sustaining tower; one tower could generate enough clean energy to power all of Metropolis.[1]

The solar tower's main use for Tess Mercer was to create better, cleaner energy for the planet and make the world greener. Major Zod, on the other hand, intended to use the tower to turn the yellow sun red to give himself and his fellow Kandorians their abilities that would make them gods among men. The process for this required the use of the LuthorCorp satellites. Once the tower collected the sun's radiation and turned it from yellow to red, it would then send the radiation to the satellites which would send the radiation back down the earth and fuel the Kandorians' powers.