"Let's just say the reaper can swing his sickle at me, but I'm beyond Death's stroke now" - Slade to Clark Kent, Icarus

Having survived an explosion that cost him his eye, Slade went on live television, turning the world against all "vigilantes". When Slade attempted to kill Lois Lane, he was stopped by Hawkman, who he stabbed, lit on fire and pushed out a window. Clark confronted Slade after the battle and used the Crystal of El to trap him in the Phantom Zone.

Slade Wilson is an aging military officer, who is showing signs of his long and questionable life. Nearly completely bald, save for a bit of hair on the sides, his face is lined and wrinkled. His grayish-blue eyes are hard and void of any sort of emotional sympathy. Standing at 6 feet tall he still maintain himself in good shape.

After being caught in the self-destruction of his base with Clark, Slade managed to lose his right eye, that was covered with a metallic eye-patch. He normally is seen dressed in military combat garments and dress uniforms.

In his first appearance Slade is shown to be a master strategist and military warfare. Due to his military rank (Lieutenant General, one of the highest active ranks that can be held) he is obviously a highly trained career soldier. He knows how to manipulate his opponents. He seems quick to figure out the weaknesses of his opponents and is able to implement countermeasures rather effectively for the most part.

He did manage to survive a massive explosion in his home base, this was due to the advanced government enhancements that helped heal him.

When the Vigilante Registration Act is passed and Rick Flag's Suicide Squad begin to act out against it, Slade Wilson, a firm supporter of the VRA, begins to push for more stringent measures to control and even kill the super-powered heroes of the United States, stating that they are nothing more than dictators in the waiting. As such he begins to have bases built to imprison the heroes and exploit their abilities, forcing them to work for him and the Government. He sets his sights on Aquaman in particular after he and Mera destroy one of his bases.

In order to find out what Slade has planned, Oliver Queen volunteers to register. Lois Lane meanwhile confronts Slade and discovers that Slade is a suspected war-criminal, known for torture and illegal methods of torture and interrogation. However, she is too late to warn Oliver and he along with A.C. are captured by Slade.

Clark Kent and Mera free Oliver and A.C., but Slade sets off the base's self-destruction. Clark confronts Slade who locks him inside a Kryptonite cage. When Clark pleads with Slade to let him save the other man, Slade refuses, wanting instead to die while killing Clark.

Somehow, both Clark and Slade survive the explosion. Slade appears later to be in a hospital, where it is revealed that he did lose his right eye in the processes. According to Slade, he survived thanks to enhancements made by the military.

A troubling side-note is that prior to the destruction of Slade's prison, Clark X-Rayed Slade's skull, seeing an Omega symbol branded there. This leads Clark to come to the conclusion that those who bear the mark are corrupted by the darkness.

Slade later made a statement on the news, framing Oliver Queen for the explosion of the Government holding cells, turning the entire world against the League. He arranges for the Leagues key supporters: Emil Hamilton, Tess Mercer and Lois Lane to be captured and held at the Daily Planet for interrogation on the League's whereabouts. Lois, Emil and Tess with the help of Cat Grant and Clark, escaped custody.

Later, Slade found Lois sneaking into Oliver's office at Luthorcorp and held her hostage with a gun. She fought back, yet Slade overpowered her. As he was about to kill her, Hawkman arrived and fought Slade to a stand-still. Although Slade managed to stab Hawkman from behind with his sword, an explosion caused by a leaking gas line blasted Slade back in defeat while the impact blasted Lois out of the building. Slade survived the explosion with minimal damage and was about to get away, but was confronted by Clark. He managed to defeat Slade by sending him to the Phantom Zone. Clark told Tess that after the Darkness is gone and everything returns to normal he will bring Slade back from the Zone to stand trial.

When he was sent back to Earth from the Phantom Zone by Zod, he was found on a street corner unconscious. Slade currently lies in a coma on a military base.

It was revealed that Slade is still in a comatose state, having a brain disease, which the doctors haven't seen before. The doctors also say that his brain disease is almost like not "of this Earth" and they do not know when Slade is going to wake up.

Slade's daughter, Rose, having the same vendetta as her father had against superheroes and blaming them for his current state, decided to take down one by one any vigilante that will come in her way and especially attack Jay Garrick's team, keeping the last generation of heroes from rising into power, like her father tried to do for so many years. She believes that her father would be very proud of her, seeing her continue his task.

When Slade Wilson was a young man he wanted to join the army but was too young, he then lied about his age so he could enlist. After enlisting in the army he proved that he could perform on a level far superior to any other young soldier. While in the army he met Adeline Kane, his instructor, who he later married. After they were married, Adeline had a son, Grant Wilson. Slade Wilson continued to be an active soldier in the army. Slade volunteered himself for a medical experiment being conducted by the army to create meta-human soldiers. The experiment was thought unsuccessful and also left Slade bedridden for a while as a result. The army dropped the project. After a time however, Slade discovered that the experiment had enhanced his sight, smell, strength and reflexes. After being discharged Slade decided to dedicate himself to hunting in order to fill the void he felt within himself: however this wasn't enough to make him feel the excitement he felt during his time in the army.

After a time, Slade stopped hunting and without his family's knowledge, created the costumed persona of Deathstroke the Terminator, probably the greatest mercenary the world would ever know. His double life came back to haunt him, when his son Joseph was kidnapped by his enemies. Rather than give himself over to his enemy, Slade fought and it resulted in his son's throat being slashed open and being unable to talk. Adeline, furious at her husband's actions, attempted to kill him, but merely shot out his eye. She later divorced him.

Deathstroke's first son, Grant, decided to follow in his father's footsteps and so first went to a military school. After that, Grant became a mercenary for hire and took a contract from the H.I.V.E to kill all members of the New Teen Titans. However things didn't turn out well and Grant died battling the Titans. Deathstroke decided to honor his son by taking over his son's contract and so swore to destroy the Teen Titans. Deathstroke tried to kill the New Teen Titans by himself, however, the combined powers of the team were too much for Deathstroke to handle alone.

Deathstroke then later met a teenager named Tara Markov aka Terra. Thanks to her strange hate for everything, Deathstroke teamed up with her and developed a plan to destroy the Teen Titans from within. Slade's own son, Joseph, now called "Jericho" however joined the Teen Titans in the hopes of defeating his father. Terra died battling the Titans and Deathstroke was defeated. Deathstroke was able to later save the President of the United States, however he was also blamed for the murder of a senator. Deathstroke became a fugitive and went underground until he could clear his name. During this time, Deathstroke discovered that besides his physical abilities and his healing factor, he was also immortal.

Eventually Slade learned of his third child, a daughter named Rose. When Rose's mother died, Deathstroke decided that the best thing for her was to be left under the care of his longtime friend Wintergreen. However, when his son Jericho turned evil, Deathstroke took back his daughter, drugged her and turned her into a mirror version of himself, with her cutting out her own eye to be like him. Rose, now called Ravager, later escaped her father's control and joined the Teen Titans along with Jericho who was cleansed for a short time of evil. Slade later attacked the Teen Titans, hoping to compound a new family for his children through his sinister deeds.

Deathstroke recently recruited Cheshire, the Tattooed Man, Cinder, Osiris and Red Arrow to form a group of villains, who he mockingly calls the "Titans". Their first mission was to kill Ryan Choi, the new Atom.

Other faces of Slade Wilson

Ron Perlman as the voice of Slade in Teen Titans. 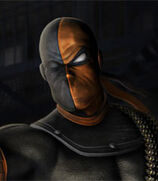 Patrick Seitz as the voice of Deathstroke in Mortal Kombat vs. DC Universe. 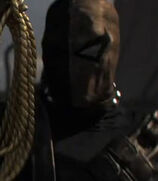 Tracy W. Bush as the voice of Deathstroke in DC Universe Online.

Wentworth Miller, later Fred Tatasciore as the voice of Deathstroke in Young Justice. 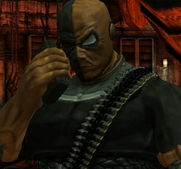 Larry Grimm as the voice of Deathstroke in Batman: Arkham City Lockdown

J. G. Hertzler as the voice of Deathstroke in Injustice: Gods Among Us. 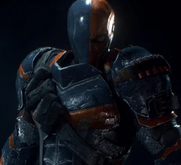 Ron Perlman as the voice of Slade Wilson/Deathstroke in Justice League: The Flashpoint Paradox. 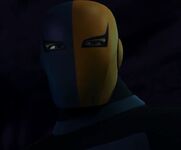 Robin Atkin Downes as the voice of Deathstroke in Beware the Batman.

Thomas Gibson as the voice of Deathstroke in Son of Batman. 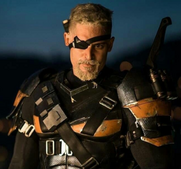 Joe Manganiello as Slade Wilson/Deathstroke in the DC Extended Universe Films (2017-2021).
NA
Miguel Ferrer as the voice of Deathstroke in Teen Titans: The Judas Contract. 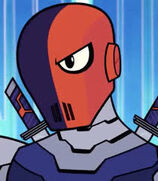 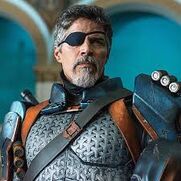 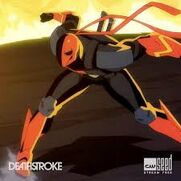 Michael Chiklis as the voice of Slade Wilson/Deathstroke in Deathstroke: Knights and Dragons.