Shelby gained temporary powers after being injected with a green kryptonite-steroid serum:

Before he was adopted by the Kents, he belonged to Zack and Josh Greenfield, who work at a veterinary clinic in Smallville. They called him Einstein (undoubtedly a direct nod to the Golden Retriever who was given the same name, in Dean Koontz's book "Watchers," who was also genetically bred to have human intelligence and special senses), because they had enhanced the dog's intelligence and strength with kryptonite. Shelby ran away from them and was hit by Lois Lane. She brought him to the Kent farm, where Clark discovered the dog's super strength. At first, Clark wanted to call him Skippy, but later thought of naming him "Krypto", because his origin was cryptic. Hercules was sent to the Kent Farm and soon attacked Jonathan, however Einstein soon came to his rescue but was recaptured by the Greenfield's. Clark and Lois managed to track them down but due to Kryptonite Clark became weakened and was also captured. Einstein escaped and followed the Greenfields wanting to save Clark.

Having used the dogs to steal a large amount of money, the Brothers planned on burning all the evidence including Hercules and Clark. Einstein manages to save Clark by removing him from the kryptonite. He also goes back and saves Hercules from being burned alive while Clark deals with the brothers. With both dogs safe and the brothers in custody, Clark and Einstein return to the farm. While Hercules runs off into the woods peacefully.

When Jonathan agreed to keep the dog, Clark and Martha named him "Shelby", after a dog that Martha once had as a child. Despite the fact that the dog was a male, Clark, in particular, felt Shelby was a better name than what Lois had in mind: "Clarkie" (on the grounds that he was totally annoying and she couldn't come within ten feet of him without feeling ill).

Shelby no longer has enhanced abilities because the serum that was used wore off after a few days. He remains a fond member of the group at the Kent farm, with even Lois being fond of Shelby in her own way, despite her being allergic to him. (Krypto)

He is later seen lying on the floor while Lois attempts to tell the Kent’s about Lucy Lane coming to stay with them, he soon barks and happily greats her at the door. (Lucy)

In Clark’s precognitive dream, Shelby is seen clawing at the front door after being awakened by the strange Kryptonian phenomena going on in the Kent’s yard. When Clark is awakened by Martha, the real Shelby is seen in the living room with the Kents. He also jumps up to show Lois affection, after she tells the Kent’s she’s leaving to help her dad. After the town receives news of an incoming meteor strike, Shelby loads up up with Martha and Johnathan Kent until they are stopped by Jason Teague. Shelby is ready to attack but Martha calls him back due to Jason firing a shotgun. (Commencement)

After the Meteor Shower when Lois arrives at the Kent Farm, Shelby is outside barking trying to find his family. He is later seen when the Kent’s are all reunited outside their ruined home. (Arrival)

With the threat of the town being destroyed, Shelby accompanied the Kent’s while they prepared to evacuate. (Hidden)

Shelby was barking at the strange bright light and thunder that filled the sky and hit Martha, helping to alert Clark that she was in need of help. Later, Shelby was with Martha Kent outside the barn, smelling the rainstorm after she'd been cured of Braniac's affliction and with Chloe, in the house. (Solitude)

Shelby was at the Kent’s family Christmas party and snuck a few treats off of one of the plates, until he was caught by Johnathan. (Lexmas)

Shelby was barking until he drew Clark and Martha's attention to Jonathan, after he'd been beaten up and hung upside-down by Lex's fanatics. (Fanatic)

Maddie Van Horn is immediately happy to see Shelby, running over to pet him and speak to him despite not talking to anyone else. He later is there to see her off when she is picked up by her grandmother. (Fragile)

In the barn Shelby and the rest of the animals were spooked by the arrival of the spaceship and Zod. (Vessel)

When Clark was fixing a tractor in the barn Shelby was with him and started barking when he sensed the upcoming phantom that Clark couldn’t. When Dr. Hudson inhabited Clark's mind, hearing Shelby's barking at Martian Manhunter helped Clark come out of the prolonged hallucination. After being freed, Clark embraces Shelby and thanks him for saving his life. (Labyrinth)

Shelby is seen in the Kent barn when Clark is fixing a piece of equipment, Clark asks if Kara kicked him out of the house too. He later barks upon the arrival of Lana.(Fierce)

Shelby barks at Brainiac after he Shapeshifts from the form of an owl and enters the barn to talk with Kara, he runs to Clark alerting him of danger in the barn. (Veritas (episode))

Shelby is seen in the Kent kitchen after Clark let him in the house to feed him (which he almost forgot to do) before he super sped to work at the Daily Planet.

Shelby is still being fed by (supposedly absent) Clark at the farmhouse but when a suspicious Lois sees the food bowl full she takes the dog to the Talon. Chloe covers for Clark and brings Shelby back. When Clark didn't want to eat the food Lois cooked, he tried to feed it to Shelby who wouldn't eat it. When Lois was under the Gemstone kryptonite influence she attempted to make a traditional meal but Clark refused to eat it as it was severely overcooked, he tried to give it to Shelby but even he refused to try Lois’s cooking. (Persuasion)

Shelby came into the barn when Lois was looking for the key to the Fortress of Solitude. (Abandoned)

Shelby is also seen by Clark in the Fortress, when Jor-El is projecting his trials from over the years. (Finale, Part 2)

Shelby now lives with Martha in her apartment in Washington, DC.

He is first seen inside Martha's house, barking while watching her going inside Bones' limousine. Later, he seemed very happy to see his former owner, Clark, when he and Lois visited Martha.

Later while Clark and Martha were investigating the man who attacked her and Director Bones, Lois took Shelby for a walk in the neighborhood.

Sometime later, Martha took Shelby for a walk, when suddenly they saw in the sky an enormous storm, created by the god Hades in the center of the Lincoln Memorial and Shelby immediately started barking.

In the comics, Shelby was the name of one of the dogs Clark Kent grew up with on the Kent farm. One of the names Clark suggests for the dog is "Skipper", in the original Superboy comics Shelby poses as the Kents' pet dog "Skip."

Smallville's version of Shelby has some similarities with the most famous pet of Superman, Krypto, who is also called Super-Dog and appears later in Clark's life.

Krypto was the family dog in Jor-El's household and was used for a test flight of the rocket that eventually carried baby Kal-El to Earth. However, Krypto's rocket was blown off course and drifted in space for many years until the rocket picked up the signal from Kal-El's rocket that landed on Earth. Krypto arrived when Kal-El was a teenager and the two got along famously. Krypto adventured alongside young Kal-El, though he was not publicly known. Krypto had superhuman (or, supercanine) abilities, but with a normal canine intellect.

In the New 52, Krypto appears as a normal dog with no powers and the pet of the El Family on Krypton. His appearance is more alien and he resembles more of a wolf-dog. He was created by Jor-El, who implanted to him some of young Kal-El's DNA in order to create a companion for his son with an unbreakable bond. During the planet's final moments Krypto is sucked into the Phantom Zone while bravely trying to defend the family from the incarcerates, when Jor-El opens a portal, trying to save his wife and son. The baby Kal-El is left in anguish at the loss of his dog.

There is mention of a ghost in the form of a white dog that is protecting Clark Kent and it is later revealed to be Krypto's projection from the Phantom Zone. Superman was later able to pull Krypto from the prison but Krypto was severely injured. Worried, Kal-El carried Krypto into space, and threw him near the Sun, healing Krypto of his injuries.

Other faces of Krypto 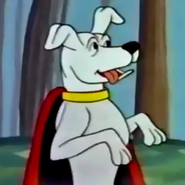 Krypto the Super-Dog in The New Adventures of Superman 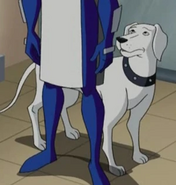 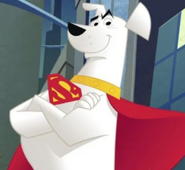 Krypto in Legion of Superheroes (2007)

Krypto the Super-Dog in Batman: Brave and the Bold 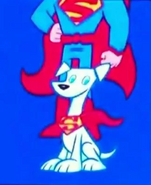 Krypto the Super-Dog in Batman/Superman: Apocalypse (2010) 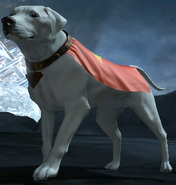 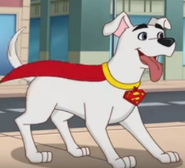