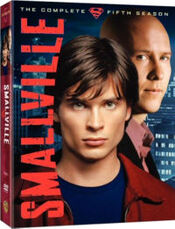 The Season 5 DVD contains all 22 episodes from the fifth season of Smallville with deleted scenes and commentary. The DVD was released on 12 September 2006 in the U.S. and 28 August 2006 in the U.K. The cover depicts Clark Kent and Lex Luthor and represents how their friendship begins to end.

An astonishing season of destiny! Clark Kent now carries a full load of classes at Central Kansas U., but that's not all he carries. He carries the full weight of his - perhaps the world's - destiny. "We call this season Superman in Training," series co-creator Alfred Gough says. "Clark is going to accept his destiny." During this exciting pivotal season: the Fortress of Solitude rises. A spaceship mystery unfolds. A dark tragedy - one even Clark's powers can't prevent - strikes. These and more key elements of Superman lore fall into place. The future Man of Steel grows another year bolder in this bonus-packed Deluxe 6-Disc DVD set.