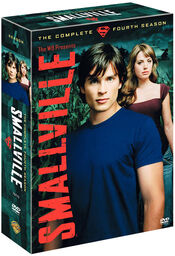 The Season 4 DVD contains all 22 episodes from the fourth season of Smallville with deleted scenes and commentary. The DVD was released on 13 September 2005 in the U.S. and 10 October 2005 in the U.K. The cover depicts Clark Kent with Lois Lane behind him, foreshadowing their famous relationship.

Clark Kent will have plenty of reasons to remember his senior year! The thrilling reinterpretation of the Superman legend evolves in Season 4, whose 22 episodes include the quest for 3 Kryptonian crystals... and Clark's bold attempt to keep those mysterious stones from destroying Earth. Clark also becomes a highly recruited football star. Lana gets a boyfriend. Lois Lane — smart, opinionated and entirely annoying to Clark — comes to Smallville. This season also shows how Chloe learns the scoop of the century. Lionel becomes a straight-up nice guy. Lex steps further from the light into darkness and a new calling awaits Clark - an awakening to a destiny that only he can accept and fulfill.

Here are highlights from the commentary on Transference with John Glover, Alfred Gough, Miles Millar, and executive producer Ken Horton.

Here are highlights from the commentary on Spell with Kristin Kreuk, Allison Mack, Erica Durance, and director Jeannot Szwarc.