Smallville Wiki
Register
Don't have an account?
Sign In
Advertisement
in: Season 8 characters, Characters in the comics, Luthor employees,
and 5 more

This article is about the DC comics super-villian called Parasite. For the adrenaline parasite worms, see Parasite.

"You may have recruited us, but we're free agents now. And with all that power, no one will ever mess with us ever again." - Rudy, to Tess, Injustice

Rudy Jones was a member of Tess Mercer's team of metahumans under the codename: Parasite, and has the ability to steal super powers from other metahumans and aliens.

Rudy Jones is a young looking man of medium height, with dark blond hair, light blue eyes and an angry demeanor. When he was in Belle Reve, he wore the usual patient garb.

As a member of Tess' team, he wore black pants, a black shirt with a black, thin, hooded sweatshirt over that and the team's signature black, leather jacket with the Orb's silver insignia stitched into the front. When Rudy used his ability on Clark, the appearance of a purple, transparent figure would leave his body, enter his victim's body, and then return to his.

Parasite has the ability to steal the powers of other people through physical contact. (Injustice)

Rudy was recruited from Belle Reve to be a member of Tess Mercer's metahuman team to track down Doomsday. He was with Plastique when they came to help Livewire and Neutron, but Doomsday was already gone, having killed Neutron. On Tess Mercer's orders, he steals Livewire's powers and leaves along with Plastique for Tess to deal with Livewire. They meet with Eva Greer in the form of Chloe Sullivan and she questions Tess' loyalty to them, though they both stick by the Tess and the mission.

Later, when Clark Kent met with Plastique and tried to convince her not to take her revenge on Tess, Rudy suck up behind Clark and stole his powers. Rudy was about to attack Clark before Plastique told him to let him be. The two then blasted their way in to the Luthor mansion and captured and tortured Tess. Clark then showed up and tried to fight Rudy, but to no avail. Oliver Queen as The Green Arrow then appeared and weakened him with a kryptonite ring. Rudy returned Clark's powers to stop the pain and then was taken away along with Plastique.

Originally a menial slacker, Rudy Jones was transformed into the Parasite while working as a janitor at a Pittsburgh S.T.A.R. Labs facility. Unknown to anyone at the scene, the Lord of Apokolips, Darkseid, remembered the Pre-Crisis Parasite and manipulated Jones to become the modern version.

He made Rudy think that a waste container might have held something valuable. He opened it and was exposed to strange radiation that changed his body into the bald, green-skinned villain. Jones now had the ability to absorb the life energy of other people, leaving smoldering skeletons. This power was necessary for his survival as his own body is in a constant state of hunger for energy that it can't sustain on its own. During this time, Martin Stein, one half of the Firestorm matrix (Ronnie Raymond being the other half) learned he was dying and decided to destroy all the nuclear weapons in the world. This did not sit well with Earth's governments, particularly the United States, who sent the Suicide Squad to Times Square, where Firestorm was holding a press conference. Things quickly got out of control as the Squad and the Justice League, both intent on subduing Firestorm, fought one another, and the Parasite (who was brought on the mission against the protestations of both Amanda Waller and Colonel Rick Flag Jr.) is released. He goes on a rampage and apparently kills Multiplex, only being brought under control by the cooperation of both teams. Later, he attacked the new Firestorm, who easily subdued him and left him near death.

In the 2009-10 miniseries Superman: Secret Origin redefines Parasite's origin. In this version, Rudy Jones is a janitor of the Daily Planet. One day Lex Luthor chooses Rudy as part of a daily "LexCorp Lottery" in which he selects one person from the crowd formed outside the LexCorp building to provide them with a new life. Inside LexCorp, Rudy eats a donut which had been accidentally spilled with a purple toxic material (revealed in Issue 5 to have been produced by extracting the radiation from Kryptonite making him similar to Smallville's Meteor freak). This transforms him into the Parasite, subsequently going on a rampage in Metropolis until he is stopped by Superman. He was last seen in Issue 5 to be in a holding cell in LexCorp tower, having been seen by both Lex and Lois Lane's father, General Sam Lane.

Other faces of Parasite 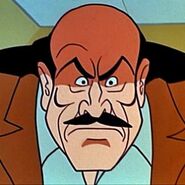 Parasite in The New Adventures of Superman. 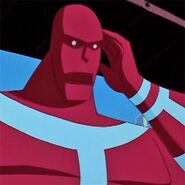 Brion James as the voice of Parasite in Superman: The Animated Series.

Marc Worden as the voice of Parasite in Justice League Unlimited. 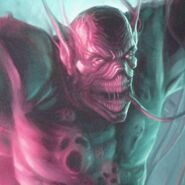 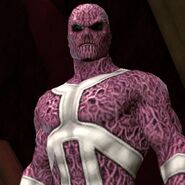 Robert Faires as the voice of Parasite in DC Universe Online. 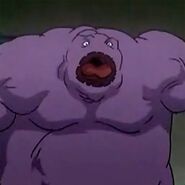 Michael Gough as the voice of Parasite in All-Star Superman.

Adam Baldwin as the voice of Parasite in Young Justice.

Parasite in Injustice: Gods Among Us.

Brett Dalton as the voice of Rudy Jones/Parasite in Superman: Man of Tomorrow (2020)