Rose Wilson (also known as Ravager) is General Slade Wilson's daughter and an adversary of the Teen Titans.

Rose is a young female with white hair.

Stargirl approached Rose Wilson, Slade Wilson's daughter. Rose, having a vendetta against superheroes and blaming them for her father's comatose state, found it as an opportunity to take the team of young heroes down so she opened her door holding a gun against Courtney.

At some point she confronted the Angel of Vengeance, stating that Andrea was a fun one to take down.

While some D.E.O. agents proceed to recapture Doctor Phosphorus from the bottom of the ocean, putting him in a containment box. One of them wonders how he could actually escaped from the prison in the first place and says that he knows it didn't happen from the inside so that means that someone outside of the prison helped him. Hidden in a roof close by a mysterious woman who is watching the agents reveals that she was the one who let Phosphorus escape and she only did it so she can observe Garrick's team in action.

At Jay Garrick's school, Jaime enters his room but he slides on some blood that there is on the floor and sees Zan severely wounded. Jaime immediately turns on his armor but before he can transform an unknown woman, who was behind the door, attacks him with some kind of sonic waves and wonders if the Blue Beetle will be more cooperative from Zan.

Inside Jaime and Zan's room, the woman reveals that she is Slade Wilson' s daughter and that the reason she is attacking them is because of her father, she is continuing his task, which was to stop and imprison the vigilantes, like he did with V.R.A. and when he killed Hawkman. She is also blaming the superheroes for his current comatose state. Jaime asks her what that has to do with them and she tells him that her father tried to stop the next generation of heroes from rising into power and now she makes sure that they will "die in the crib". Jaime asks her how she knew where to find them and she says that she found out about them when she confronted Stargirl. She also implied that she might had hurt Courtney. Then she asks him why would he want to join this team but Jaime replies to her by asking why she doesn't just kill him and she says that he and Zan were just practice for her. Suddenly Conner appears and strikes her with his heat vision throwing her through the window, outside of the building and saying that she will need the practice.

Outside, Rose lands on the ground and says she got caught off guard and it won't happen again, while catching an arrow Mia throws on her. Jay, Mia and Megan confront her with Jay saying to her to leave his lawn. He then runs towards her but she uses a gravity bomb, which immobilizes him. Mia then fights with her seemingly defeating her but Rose manages to poison Mia with a needle full of a drug called, "Vertigo", making her sick. Conner then arrives and Jay tells him not to worry about him and waste any more time but get to work. Megan asks Rose what did she do to Mia and she says to Megan not to worry because the drug will run its course before long. Then Megan says she is not the one she should be worried and mentally attacks Rose but before Megan can actually do to her any damage, Rose reveals that she also knows about her weaknesses and attacks her with fire.

Rose threatens the rest of the team to stand down or she will kill their teammates by detonating the bomb Jaime has on his back. Conner tells her if she wants a real fight she should confront him and leave the rest of his team out of this. Rose then says that his proposal makes it easier on her because he is the reason she is there in the first place, while revealing that she has a green kryptonite sword especially for him.

While Conner speeds towards her, Rose says that he might be strong but he is also careless, and then wounds him with her sword. Seeing him hurt, an obviously worried Megan calls his name but Conner tells her and the rest of the team to stay back. As Rose gets ready to attack him again, she says that the problem with most of the heroes is that they aren't willing to kill. A weakened Conner, both from the green kryptonite and his wound, tries to prove her wrong as he attacks her with his heat vision but he misses. He then tries to attack her again but the effect of the kryptonite on him has also weakened his powers. Conner then asks Rose that if she is so better than then why she haven't killed Jaime, Zan or even Stargirl yet. He also says that she might not be the big bad killer, she wants everyone to think of her but while Conner talks to her, Rose proceeds to attack him once again and this time she wounds him in the belly. Rose tells him that he should not think she is just playing with him because she is the one to blame for all the innocent people that got killed when she freed Phosphorus and she also says that she is a real killer and every person who has an "S" on his chest is just as bad. Then Conner asks her why she did not go after Superman in the first place, before he hits her in the face.

Meanwhile, Mia, who is still suffering from drug poisoning, says that she can't fight in her condition but Conner, through the telepathic link, tells her to just start shooting arrows. While Rose is ready to kill Conner with her sword, Conner uses his telekinesis to control Mia's arrows aiming Rose. Rose then threatens Conner that if he kills her she will blow up his friends and their home base. Suddenly Jay appears in a helicopter bringing D.E.O.'s soldiers with him and telling them that Rose is the one who freed their prisoner. Conner says to Rose that the "S" on his chest means "Hope" not "Murder" but he can't just let her walk away. Rose says that he must go ahead and kill her because she won't get sent to a prison, like the one her father was sent and then proceeds to commit suicide but Conner uses the arrows with his telekinesis and destroys Rose's sword. Conner succeeds to take the detonator from Rose and then the D.E.O. arrests her.

Later, Superman visits Conner and tells him that Jay told him he was proud of him. Conner says that he might visit Rose in Alcatraz because she is still allowed visitors until her hearing and he wants her to know that just because her father was a tool, it doesn't mean she has to be one too.

Slade Wilson (Deathstroke) meets Lillian Worth on a search-and-rescue mission a few years after his divorce from Adeline Kane. His mission is to make sure that she escapes war-torn Cambodia safely. After an intermittent love affair with Wilson, Worth gives birth to a daughter whom she names Rose. Believing it to be in the child's best interest, Worth keeps Rose a secret from Wilson. Worth eventually settles down at a brothel in New York City, and during a time when Deathstroke is injured and a fugitive from the law, Worth takes him in and nurses his wounds. Wintergreen (Deathstroke's butler) discovers 14-year-old Rose and suspects that she is Deathstroke's daughter.

When Ravager (Wade DeFarge - Deathstroke's half-brother) kills Deathstroke's friends and family, Ravager discovers Rose, captures her, and tells her that Deathstroke is her father. Wintergreen and Worth launch a rescue attempt, but Worth is presumed dead after she drives a jeep off a cliff while trying to run over DeFarge. Wintergreen successfully rescues Rose and escapes. Rose tries to reach out to her father, but he turns her away. He fears for her safety because he believes himself to be responsible for the deaths of two of his sons. Deathstroke leaves her in the care of the Teen Titans superhero team. During a training exercise, Rose is injured and taken to the hospital, and her precognitive powers emerge for the first time when she has a lengthy vision of Deathstroke's future. She awakens before she can test her powers further. She leaves the Titans shortly after and does not see them again until the Technis Imperative conflict when she allies herself with the Titans to save fellow Titan Cyborg .

The Madison family in Chicago adopt Rose, but DeFarge kills her new family. The Ravager claims to have been offered $100,000 for her death by an anonymous source, but neither of them know that Deathstroke hired DeFarge, in an attempt to bring Rose closer to him.

Deathstroke anonymously alerts the Titans that Rose's life is in danger, and they fight to defend her. All of the fighters are rendered unconscious by an explosion of halothane gas, and Rose awakens in Deathstroke's lair. He apologizes to Rose for abandoning her and says that she is the only family he has left. Deathstroke suggests that she become his apprentice, offering DeFarge as her first kill. Rose accepts and takes the name “Ravager” for herself. Deathstroke secretly injects Rose with the same serum that gave him his abilities, and it causes her to suffer from psychosis.

Deathstroke doubts Rose’s readiness to work with him and plans to disown her after she hesitates and is unable to kill Deathstroke’s son Jericho. To prove her loyalty, she gouges out an eye to match his missing eye.

One year after the events depicted in the Infinite Crisis crossover, Rose once again joins the Teen Titans.

Following the Deathtrap storyline, Rose briefly tries her hand at being a part of the Titans, but finds that she does not belong with them. After an altercation with Bombshell, staged to ensure her loyalty to the team, Rose leaves to find her own way in life.

In the Teen Titans tie-in to the Blackest Night crossover, Rose tracks Deathstroke down to his old mentor Wintergreen's house and attacks him. During the fight, the two are attacked by their deceased relatives Grant, Wade and Adeline, who, along with Wintergreen, have all been reanimated as Black Lanterns. When Grant attacks Deathstroke, intending to burn him in a fireplace, Rose reluctantly intervenes, saving her hated father. She then attempts to incinerate Wade, but is surprised when Jericho jumps out of his body. After the battle, Rose refuses to reconcile with Deathstroke, despite acknowledging her daughterly love for him. She also realizes that her mother may still be alive, as she was not among the attacking Black Lanterns.

In the New 52, Rose works for an organization called N.O.W.H.E.R.E. that monitors metahuman teens around the globe. She is assigned the task of handler to N.O.W.H.E.R.E.'s biggest asset, Superboy, and entrusted with the responsibility of bringing him down if he ever goes out of control. Rose has a rivalry with Caitlin Fairchild, a young N.O.W.H.E.R.E. researcher who cares for Superboy.

She has since left N.O.W.H.E.R.E. after being allowed out of Harvest's control as payment to Deathstroke for completing a contract.

Other faces of Rose Wilson 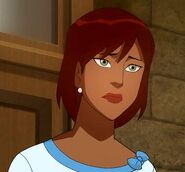 Freddi Rogers as the voice of Rose Wilson in Justice League: Crisis on Two Earths.

Pamela Adlon as the voice of Rose Wilson in Teen Titans Go!. 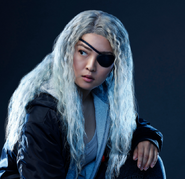 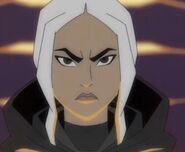 Faye Mata as the voice of Rose Wilson in Deathstroke: Knights & Dragons.
Community content is available under CC-BY-SA unless otherwise noted.
Advertisement