Member of the The Legion

"Kal-El, your influence will reach far beyond Earth." - Rokk to Clark, Legion

Rokk Krinn is a member of the Legion of Super-Heroes from the 31st century under the name Cosmic Boy.

He and two other members of the Legion returned to the past to help Clark defeat Brainiac.

Rokk Krinn is a humanoid alien from an unknown planet.

He is of average weight and compared to his Legion colleagues, is of moderate height. He has olive colored eyes and slight facial hair. When we first see Rokk, he had medium length dark brown hair but when he returned in Doomsday, his hair was shorter.

In Legion and Doomsday, Rokk was seen wearing his Legion outfit which consists of a black jacket with silver, metallic circles on it that represent his power of magnetism, with a purple shirt underneath and black pants.

Like the other members of the Legion, he is also always wearing his Legion ring that allows him to time travel as well as the power of Flight.

As leader of the Legion, Rokk is the most serious-minded and dedicated member of the three Founders. He is quick to come up with plans and issue orders and seem naturally comfortable making the harder decisions that most people would refuse to make. He does however initially lack the moral code that Clark Kent has, feeling no issue in killing Chloe Sullivan in order to destroy Brainiac. Rokk however means well and despite his cold personality, is in utter awe of Clark Kent, not only as a hero, but just as a person who will not give up on his friends for everything. As a result, Rokk realizes that killing is never the answer and makes it one of the main policies of the Legion.

Rokk has the ability to manipulate magnetic forces around him, enabling him to create force fields and is able to control and summon all metal objects that are magnetic.

"Tomorrow is the day you die." Rokk to Clark Kent, Doomsday

Along with fellow founding Legion members Garth Ranzz and Imra Ardeen, Rokk traveled through time back to the 21st century to stop the Persuader from killing Kal-El aka Clark Kent and altering history. They found him to at Clark's barn where he had just returned from seeing Jimmy off to Star City. After the Persuader cut his abdomen, Rokk took away his atomic axe using his ability of magnetism and Imra distracted him using telepathy enough so that Garth could knock him out using his electricity. Once unconscious, Rokk took away the Persuader's stolen Legion ring, sending him back to the 31st century to be contained. Rokk, Garth and Imra then introduced themselves to Clark as the Legion of Super-Heroes.

The three explained to Clark what he is truly destined to be, which is a model for all of the galaxy for aliens to come to earth and live among humans. Rokk learned that the Persuader did not just come to kill Kal-El, but to destroy the Phantom Zone Crystal, the Martian Crystal belonging to Martian Manhunter, to prevent the destruction of Brainiac and thus destroying the future since that was how Clark defeated Brainiac in the future. The three Legion members decided to help Clark defeat Brainiac since history is different now and they were willing to stop Brainiac at all costs even if it meant killing its human host: Chloe Sullivan.Clark initially refused their help since they're willing to kill a human being to stop Brainiac. After managing to stun Brainiac as it was trying to drain knowledge from the human race through computers, Garth tried to take on the responsibility to stop Brainiac, but Rokk wanted to do it instead, seeing that Garth was not up to murdering someone.

Finally working together after Clark stopped Rokk's attempt at killing Chloe/Brainiac, Clark and Imra were holding Brainiac down and making contact with Chloe from within, while Rokk and Garth managed to electrically and magnetically extract the nanites of Brainiac from her. As they did, the particles had formed a sphere and disabled Brainiac for good. Rokk, Garth, as well as and Imra returned to the future with what was left of Brainiac to be reprogrammed into something useful, but not before Rokk warned Clark to be careful of the days ahead.

Returning from the future to the 21st century once again, Rokk goes to the Daily Planet rooftop to meet Clark and told him that by saving Chloe from Brainiac, he saved her connection to Doomsday and that Chloe is the reason that Doomsday cannot be defeated now since she made him immune to kryptonite when she tried to kill him with it and she stopped Clark from sending Doomsday to the Phantom Zone at the Fortress of Solitude with the Black crystal.

Clark states that he wouldn't change his decision on saving Chloe no matter what happened and then Rokk tells Clark that tomorrow is the day he'll die if he goes up against Doomsday head-on. He gives Clark another Legion ring since his old one got destroyed a while ago and suggests that Clark send Doomsday to the future to fight The Legion since nothing on the planet can stop him from killing Clark, then he returns to the future when Clark refuses to accept his help, stating that this is his problem, not the Legion's and that he will embrace his destiny, even if it means that he'll have to die to do it. Rokk's meeting fulfilled its purpose as his warning prompted Clark to create a plan to imprison Doomsday beneath the surface of the Earth rather than face him in a head-on battle.

During the 31st century war between EarthGov and New Krypton, Rokk and Imra infiltrate the colony and encounter EarthGov agents attempting to commit a terrorist attack on the New Krypton world-ship. They manage to disarm them but draw the attention of elite security who believe they were part of the terrorist attempt. As they are about to be taken to New Krypton's judgment council, Clark and his cousin Kara Zor-El arrive on the scene defending them.

On New Krypton, Supergirl asks Cosmic Boy why he is not with his friend Lighting Lad, with whom he used to be very close and he responds to her that he and Imra kind of avoiding him suggesting he is in a relationship with Saturn Girl.

Rokk then asks Kara to tell him what she has learned while she was a spy for the Kryptonians and help the Legion stop the war. Superman arrives on the scene and says to Kara that she doesn't have to say anything, betraying the Kryptonians' trust because he already knows everything. He reaveales to Supergirl and Cosmic Boy that the war is not about politics but actually for another more religious reason.

Later Cosmic Boy gathers all the members of the Legion so they can stop the upcoming war.

In outer space, Superman and Supergirl meet the Legion. They inform the cousins that the Kryptonians have launched an incoming gravity bomb at Earth in response to the attack by Doomsday on New Krypton. Clark seems surprised and Kara asks about Doomsday so Cosmic Boy explains to her that it was a monster that Clark defeated some years ago. Kara then calls all the Legion members to follow her to Earth.

Later on Earth, Supergirl and the Legionnaires are ready to stop the bomb that is heading to Metropolis, but it suddenly explodes before they can do anything.

With the gravity bomb activated on earth in Metropolis, Booster Gold along with Skeets commandeer a transporter ship and Booster decides that he'll use the ship to rescue the levitated citizens. He is joined by Kara and the entire Legion of Super-Heroes in the rescue efforts. As Kara beings to instruct the team on their assignments, Lighting Lad notices the approaching battalion of EarthGov ships. A voice from the intercom coming from the ship declares their presence is not their to fight but to aid the Legion.

Meanwhile deep in space Superman engages Doomsday flying him directly into the Sun. Saturn Girl tells Superman it doesn't have to be this way but he just asks her that the Legion would ensure that no one unearth this monster again.

Another Legionnaire interjects his opinion in telepathic communicating declaring that A lot of responsibility to rest upon one Legionnaire the voice is revealed to be Cosmic Boy who has come to Superman's rescue but not alone but with the rest of the Legionnaires creating a buddy system link chain to pull Superman out of the sun pull. As they declared that they wouldn't allow Superman to self-sacrifice his Destiny without a fight.

Together the Legion and the last two solo survivors of House of El fly as one unit of the sun proclaiming "Long Live The Legion" & "Long Live The House Of El".

Over the years there have been three primary versions of the Legion of Superheroes, but in all three Rokk Krinn, Garth Ranzz and Imra Ardeen are the founding members. Rokk's personality as the level-headed Leader of the group remains a constant in all versions of the Legion. In the original and current versions of the Legion Rokk, along with Garh and Imra, recruited Clark Kent (Superboy) as a member of their group. Rokk maintains a serious attitude and a strong sense of duty and is implied in the current continuity to have inspired Clark's leadership in his adult life. Rokk's brother Pol was a Legion member called Magnetic Kid who died in a Legion adventure called "Magic Wars" at the end of the first continuity. Although, in the original Legion, Rokk had a romantic relationship with Night Girl and even had a child with her (named Pol after his brother), their relationship never came full circle like the original Legion history. Despite being Legion leader in the late eighties history of the Legion, he was destined to one day become one of the Legion's greatest enemies, The Time Trapper. Rokk considers Garth and Imra two of his best friends in the Legion. Aside from Cosmic Boy, Rokk briefly went by Polestar. Rokk's powers are a result from the planet of Braal that leaves most of its people with magnetism manipulation abilities.

Other faces of Cosmic Boy

Chad Lowe as the voice of Cosmic Boy in Superman: The Animated Series and Justice League Unlimited. 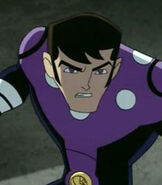 Wil Wheaton as the voice of Cosmic Boy in Legion of Super-Heroes.
Add a photo to this gallery
Retrieved from "https://smallville.fandom.com/wiki/Rokk_Krinn?oldid=311758"
Community content is available under CC-BY-SA unless otherwise noted.