Leader of the Suicide Squad

"Let's give these boys a taste of what it's like to mess with the Suicide Squad." - Rick Flag, Shield

Rick Flag (born Richard Stafford) is the leader of the Suicide Squad that abducted Oliver and Chloe, and is now working under Chloe's order. Rick is an expert marksman and skilled at hand-to-hand combat.

Rick is a smug and arrogant person. He likes to harm his hostages. His personality is identified as malicious. He has been described as identifying with superhumans, but believes that they should operate under direct authority and take control rather than their current attempts to act as independent operatives.

Rick was among the members of a mysterious group that attacked and abducted Oliver Queen at the satellite station. He interrogated and tortured Oliver for information about his team and his involvement in the recent alien attack. He later released Oliver, but warned him that he wasn't through with him yet, and traded him for another hostage, Chloe Sullivan.

Rick had Plastique and Deadshot track the heroes, as he encountered Oliver who was searching for Chloe. After getting into a fight with Oliver, in which he grazed him with a bullet, tagging him with the mark of the Suicide Squad, He told Oliver that Chloe had killed herself by ingesting cyanide pills. He and Plastique later broke Deadshot out of prison.

Rick Flag targeted General Sam Lane for his support and contribution for the vigilante registration law. He aims to eliminate those who would force heroes and super-powered people to come out of hiding. Later to justify his assassination attempt on the general (he fired a missile that was meant to eliminate Sam Lane and those in his company), he said he did so to keep the Act from being passed, however it almost killed Lois Lane, had it not been for the Blur saving her and showing General Lane that some heroes like the Blur need to be "in the shadows". When the Act had finally passed, Flag was forced to make his move by having his Squad members take down Anti-Vigilante support areas.

Rick Flag and another Suicide Squad member, Deadshot, joined forces with Chloe Sullivan to save the Justice League from the VRA's abduction and experimenting of their special abilities. It was revealed that Chloe had threatened to turn him over to the government after his attempt to murder General Lane if he and his squad did not follow her orders.

During World War II, the first Rick Flag led a small squadron of men called the Suicide Squadron. It was a disaster as only Flag survived the first mission, and the rest of the members died. With this, Flag's success increased but at a price of his mortality. Soon after World War II, Flag married Sharon Race, and a few years later when the Justice Society of America disappeared, Flag was called into Task Force X by the President. The Task Force X had two divisions: Argent (which dealt with civilian matter) and masked villains, the second division dealt with national crises. In the end, Flag sacrificed himself to stop an old Blackhawk nemesis called the War Wheel but not without leaving behind a son. After the first Rick Flag's death, he was replaced by his now adult son, Rick Flag Jr., who was leader of a public team. A mission in Cambodia went horribly wrong as his team was pursued by a Yeti. Flag worked covertly until being placed in a new squad, formed by Amanda Waller which much to his dismay, he resumed. He loathed working along with former criminals and killers such as Deadshot and refused to be like them in any way whatsoever. During a mission, Rick Flag set off a nuclear bomb in a Jihad stronghold; he appeared to be killed in the explosion, but one year later, Rick Flag is revealed to be alive and well. Amanda Waller learned about this, and she sent Bronze Tiger to rescue Flag from a secret Quarci prison after imprisonment for 4 whole years. Later on in his epic adventure of a life, Flag is transported to Skartaris with his old friend turned enemy, Rustam. After killing Rustam and returning home, it is revealed that the man who thought he was Rick Flag Jr. is really a soldier named Anthony Miller, who was brainwashed by Wade Eiling into believing he is Rick Flag Jr. After getting rid of the implant that was keeping him brainwashed, Miller stays on the Squad, as Rick Flag comments that it will always need a Rick Flag.

Other faces of Rick Flag

Adam Baldwin as the voice of Rick Flag in Justice League Unlimited.

Lex Lang as the voice of Rick Flag in Justice League: The New Frontier. 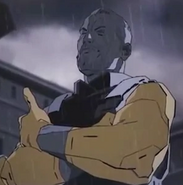 Adam Baldwin as the voice of Rick Flag in Batman: Arkham Origins Blackgate