Operational
Queen Industries is an electronics manufacturing company [1] based out of Star City and founded by Robert Queen. Robert and Laura Queen were killed after their plane was sabotaged by Lionel Luthor; later, their son Oliver became CEO to the company.

In 2009, Tess Mercer proposed a merger between LuthorCorp and Queen Industries after finding out that Lex had been spying on her. (Bulletproof) Shortly later, Oliver later announced to the LuthorCorp board that he had bought a controlling interest in LuthorCorp, with Tess' assistance. Before the LuthorCorp board could make a formal response, they were killed by a bomb planted by Winslow Schott. (Requiem)

The state of the acquisition afterwards was unclear : Tess subsequently announced the creation of the Mercer Media Group (Turbulence), but had more recently referred to Oliver as her business partner and asked him to speak to the Queen Industries board. (Echo). Lionel Luthor through Luthorcorp-Queen Industries, Lionel had acquired the company. However since Tess proved that Lionel was a fake, she and Olivers were reinstated as CEOs of LuthorCorp and Queen Industries respectively.

Queen Industries was the only known company to have an active satellite during Dark Thursday. Oliver said that how was a "trade secret".

In the early days of Oliver's ownership, Queen Industries made much of its profits from the sale of weapons and munitions. In "Peacemakers", written by Dennis O'Neil, Oliver discovers some of the disastrous impacts that the weapons he is making his money from are having in other countries. As a result, Oliver decides to sell off what is left of the company, giving all of the proceeds to a war relief effort. (This was a widely accepted retelling of the originally story of how Queen lost his remaining fortune to a man named John Deleon). For many years following, Queen Industries was without it's namesake ebullient owner, as Green Arrow traversed the countryside, to discover the true America. During this period, he formed strongly liberal values (in stark contrast to his frequent conservative traveling partner, Green Lantern) which he was never shy about espousing, and which defined and motivated his later career. The strength of his convictions indeed became one of his most indelible characteristics, and was a primary influence in the new treatment of social issues as a valid theme for mainstream superhero comics.

Eventually, Oliver Queen was able to reassert his control of Queen Industries, now divested of it's weapons contracts. He used the income from it to secretly fund his superhero activities. Originally, much of the money was funneled into bankrolling the fledgling Justice League of America. However, this ended when Oliver quit the JLA, having decided that they were only interested in the big battles with the supervillains, and weren't looking out enough for "the little guy." Since then, the income from Queen Industries has gone to charitable donations and to funding his own crime-fighting activities.

It changed hands several times until, recently, it was bought by Isabel Rochev, also known as "The Queen".

In 2011, DC Comics announce that they would be revamping and rebooting the DC Universe, altering and shortening the history and continuity of characters. Green Arrow's apppearance seems to be based on Smallville's version of the character with highlight his new costume.Oliver Queen is now based in Seattle, and using a subsidiary of Queen Industries called Q-Core as a front for his operations as Green Arrow. In addition to masking the research and development of his trick arrows, Q-Core had developed several very successful products like the Q-pad and Q-phone, making Oliver a billionaire mogul.

Queen Industries in Other Media 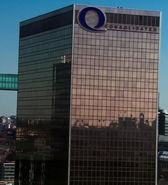