Smallville Wiki
Register
Don't have an account?
Sign In
Advertisement
in: DC Universe characters, Characters in the comics, Season 11 characters,
and 3 more

Prometheus is a criminal and the mastermind behind a robbery in Metropolis.

Prometheus utilizes an extensive range of equipment and technology. He wears a body armor and a modern-day version of a medieval helmet.

At an undisclosed location, Prometheus is discussing the events that has happened at the bank while using a few men as target practice. Prometheus's henchmen say the MPD bought the bait even though it caused more attention to their intended distraction. Prometheus tell his men that they will receive their fees, which have been transferred into various offshore accounts. As the men leave, one of them tells Prometheus that they confiscated the mech, leading a confident Prometheus saying that he thinks he can manage.

At Daily Planet, Lois Lane and Oliver Queen hold a video-conference with Steve Trevor and Diana Prince of D.E.O. about the theft on their premises. They then say that the D.E.O.'s mystics were able to conjure an image of the person responsible, an unidentified man wearing a big armor with highly advanced weaponry.

Green Arrow joins D.E.O.'s team, led by agent Cameron Chase in their search for the man who stole from its facilities. When they find Prometheus, the mercenary attacks them with all kinds of weapons making them temporarily lose their hearing and sight. As he goes through D.E.O.'s soldiers he leaves Oliver for the end and after he takes him out, he says "Game on" and passes through a boom tube.

Director of D.E.O., Steve Trevor informs Green Arrow that new activity was detected by D.E.O.'s mystics in the boom tube Prometheus has been using so he tells Zatanna to teleport him with one of her spells to where Prometheus was spotted.

Prometheus and his men arrive at Fort Knox via Boom Tube, intending to steal the gold that is kept there, but Green Arrow is waiting for them. After taking out his men, an one-on-one battle ensues between Arrow and Prometheus. Prometheus wonders if Green Arrow cares about his real identity but Oliver says that if he is not his counterpart from a parallel Earth he doesn't really care about it. During the fight, Oliver succeeds to get the upper hand and start beating Prometheus, raging over what he had done to Agent Chase's team and the fact that he almost took him away from his child, finishing him off with a massive headbutt.

The unnamed son of two hippie criminals who committed murder and theft, Prometheus traveled across the United States with them until they were cornered and shot dead by local law enforcement. This causes Prometheus's hair to turn white from the traumatic experience and he silently vows to "annihilate the forces of justice" in order to get revenge for his dead parents.

Using his parents' hidden caches of money, Prometheus travels the planet and develops his skills, becoming an underground pit-fighter in Brazil, a mercenary in Africa and joining terrorist groups in the Middle East. After avenging his parents' deaths by murdering the police officer who shot them, Prometheus went to college and ultimately located the Himalayan city of Shambhala, inhabited by a sect of evil monks. Prometheus discovers the monastery has been built on an alien spaceship and the leader of the sect was one of the creatures from the vessel. He kills the alien and obtains the "Ghost Key", which opens a portal to the "Ghost Zone", a hyperspace void that allows interstellar travel. Prometheus builds a house in the void as his headquarters, which is warped by the dimensional effects to become "crooked," and it is revealed that this is the setting for the story he now relates to Retro. Prometheus kills Retro and courtesy of his advanced helmet copies the young man's mannerisms, intending to masquerade as Retro to gain access to the JLA Watchtower.

Initially, the plan appears to be successful, with Prometheus defeating many members of the League. However, while trying to force Superman to kill himself so that Prometheus will allow civilians to leave, on the grounds that Superman was too powerful for him to devise a means of killing him, Prometheus was caught off guard by the anti-hero Catwoman, allowing the heroes time to recover, forcing Prometheus to retreat when Steel infects his systems with a virus.

Prometheus returns as a member of Lex Luthor's second Injustice Gang. During the confusion caused by the arrival of the weapon Mageddon, Prometheus is able to utilize a White Martian space vessel abandoned in the Ghost Zone to infiltrate the Justice League Watchtower and attack team aide Oracle. Oracle escapes, with Prometheus' helmet damaged in the process. The villain retrieves his original helmet, lost during the first battle with the JLA and battles Batman once again. Prometheus is neutralized when Batman sabotages his helmet based on the month he spent studying it after the last battle, loading it with the physical skills and coordination of Professor Stephen Hawking, who due to a motor neuron disease can barely move. Batman and Martian Manhunter took Prometheus into custody and arranged to reduce Prometheus' brain to a mentally disabled state in order to permanently end his threat, reasoning that his skills and training meant that no jail could hold him under conventional circumstances.

After Prometheus went into a mentally disabled state, an impostor took his mantle. Chad Graham, was taken in by Prometheus to serve as his evil sidekick, but Graham proved too impulsive and ended up leaving Prometheus and taking the identity once he went missing following his second battle with the Justice League. The villain appears in Star City, battling hero Green Arrow and local law enforcement. Although almost killed, Prometheus is saved by Hush. Hush forms an alliance with Prometheus but abandons him due to his apparent incompetence. Talia al Ghul leads the evil Cobra Cult in search of Prometheus in a bid to secure his Ghost Key. Although Prometheus is found, he is again saved by Hush, having been poisoned by one of the creations of the villainess Poison Ivy. Prometheus is then recruited to join another version of the Secret Society of Super Villains and participates in a massive attack by the Society on the city of Metropolis. During the battle Prometheus kills the hero Peacemaker. This Prometheus also has an encounter with the superheroine group Birds of Prey and defeats the mercenary Lady Shiva in seconds. The villain eventually falls under the control of the alien Starro and is used as a foot soldier. Prometheus, however, is defeated by an alternate future version of Robin and freed once Starro is defeated.

Upon Martian Manhunter's death at the hands of Libra, the mind of the original Prometheus was restored and he began tracking down his would-be protege, resulting in him killing Graham and murdering members of the Blood Pack super-hero team.

A spate of superhero deaths and attacks on others is revealed to be the work of the true Prometheus. By impersonating Freddy Freeman, he gains access to the JLA satellite, which in turn allows Prometheus to place teleportation devices in the home cities of various heroes which will "strand" the city in various places in the past and future, as revenge for the years that he spent with his mind damaged. Prometheus also maims Roy Harper after he realizes his foe is not Freddy Freeman. While defeating the JLA and their allies the Teen Titans and the reformed villain Shade using files on them, though he does not kill any of them, Prometheus is captured by Donna Troy and beaten brutally, until she is stopped by Shade. The villain offers to reveal the location of the devices in exchanges for his release, after his devices malfunction and begin destroying the cities. With Star City suffering massive casualties including the daughter of Roy Harper, Lian, Prometheus' ultimatum is met and he returns to his lair, but is killed by Green Arrow, who shoots an arrow through the villain's head

Prometheus in Other Media 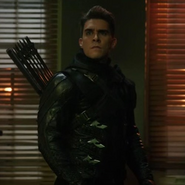