"I know my strengths. I'm more the power behind the throne, the guy behind the god. The one who makes it all happen." - Pete Ross, Drone

Pete is the son of Abigail Ross, a district judge in Smallville, and Bill Ross, the owner of the Ross Creamed Corn. He is the youngest of several children. His father, Bill Ross, encountered Lionel Luthor the day of the meteor shower in October 1989 when Lionel proposed to buy his creamed-corn business. After the meteor shower, Jonathan Kent owed Lionel a favor and convinced Bill Ross to sell the business to LuthorCorp, a business move that both Jonathan and Bill regretted. As a result, Pete harbored deep resentment and disdain for all of the Luthors and did not believe they could be trusted.

Despite Jonathan's role in the deal, Pete befriended Clark Kent in early childhood. When Pete was bullied, Clark came to his defense by pushing the bully into a door so hard that it broke into hundreds of pieces. Clark and Pete often camped outside in their backyards. He was also good childhood friends with Greg Arkin. He met Chloe Sullivan in eighth grade and harbored a crush on her for years before telling her. Chloe, however, had feelings for Clark, which Pete struggled to deal with. Pete often encouraged Clark to pursue Lana Lang, partly to make Clark happy but partly due to his jealousy of his connection with Chloe.

As children, Pete told his secrets to Clark. However, Clark did not share his secret with Pete until they were fifteen years old. (Duplicity). Even after he told Pete his secret, Clark rarely talked about his struggles with Jor-El and his Kryptonian destiny.

Pete is an African-American male of average height and of stocky build.

Pete is the youngest of five children. His older brothers were all sports stars at Smallville High and his sister was valedictorian. He often felt that he could never measure up, so he never tried, choosing instead to shield himself with a quick wit and a contagious smile. Pete is very outgoing and unlike Clark, enjoys being the center of attention. He seems usually confident with girls, but reluctantly told Chloe that he had fallen in love with her.

When trusted with Clark's secret, Pete proved to be a fiercely loyal and trustworthy friend. However, Pete always felt like he was in Clark's shadow and was envious of Clark's heroic deeds. He blamed the burden of Clark's secret when his life did not turn out how he planned, but eventually, re-evaluated this line of thinking and decided to try to make a difference on his own merits.[1]

As a human, Pete possesses no superhuman powers. However, he was a good football player and seemed proficient at basketball. In one instance, he acquired temporary Elasticity.

Pete's family felt a strong personal connection to Smallville and its history, since they had been there since 1870. After the first meteor shower, Jonathan Kent persuaded Pete's family to transfer ownership of the Ross Creamed Corn factory and its surrounding cornfields to LuthorCorp, who turned it into a fertilizer plant. Pete and his family felt powerless and betrayed after that.

In the Silver Age comics, Pete Ross knew that Clark Kent was Superboy, but Superboy didn't tell him and Superboy didn't know that Pete knew his secret. Pete used his knowledge to help Superboy in any way that he could, such as making excuses for his untimely exits. Because of this sort of help, the Legion of Super-Heroes made him an honorary member. Their childhood friendship continued into adulthood. Pete married an unnamed woman and had a son, Jonathan "Jon" Ross.

The Post-Crisis Pete is the childhood best friend of Clark Kent in Smallville who eventually marries Lana Lang, with the two having a son, Clark Ross. The two are presently divorced, even after briefly reuniting. Pete was Vice-President of the United States under Lex Luthor and briefly served as President following Luthor's impeachment, but quickly resigned.

Pete was not initially aware of Clark's secret. However, the secret was known by the villainous Manchester Black, who informed then-President Luthor of the secret, only later to wipe his memory of it. Prior to losing the knowledge of Clark's secret, Lex informed Pete that his close friend Clark Kent is in fact Superman. While Pete initially refrained from telling Clark about his knowledge he did eventually tell him.

Recently it appeared that Ross had become a villain named "Ruin", but it was later revealed that he had instead been kidnapped by the real Ruin, Professor Emil Hamilton. Hamilton also kidnapped Pete's wife and child. Superman defeated the insane Professor Hamilton, rescued Pete, Lana, and their child, as well as exonerated Pete of the charges against him. Pete has returned to Smallville without Lana to raise their son.

Other faces of Pete Ross 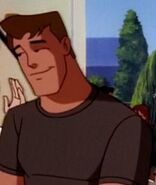 Mike Smith as the voice of Pete Ross in DC Universe Online. 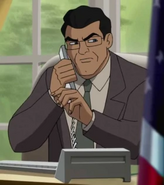 Larry Cedar as the voice of Pete Ross in Justice League: Gods and Monsters (2015)