Smallville Wiki
Register
Don't have an account?
Sign In
Advertisement
in: Season 8 characters, Characters in the comics, Characters with super strength,
and 4 more

Member of the Human Supremacist Movement

The Persuader is a member of the Human Supremacist Movement in the 31st century and an enemy of the Legion of Super-Heroes.

The Persuader is a physically large humanoid.

He wears a metal helmet and armor around his torso to protect himself when in battle. He also carries with him a large metal axe which he uses to attack people. It is unknown what he looks like under his armor.

The Persuader carries with him a large metal "Atomic Axe" that has capabilities of cutting through anything, to the point where it can split atoms and therefore it can even penetrate Kryptonian invulnerability. When the Persuader wished to cut something, the end of the axe would glow red as though it was being heated.

Part of a future terrorist group, the Human Supremacist Movement, the Persuader stole a Legion ring and transported himself from the 31st century to the 21st with the intention of both ensuring Brainiac's survival and killing Kal-El so he couldn't inspire other aliens to come to Earth in the future. He arrived in the Kent Barn and used his Atomic Axe to smash through a chest containing the Phantom Zone crystal that would have been used to defeat Brainiac, destroying it in the process. Clark arrived immediately afterward and demanded to know his identity. Upon seeing Clark, the Persuader used his axe again and drove it into Clark's abdomen, seriously wounding him, and then kicked Clark to the floor and pinned him. Just as he was about to strike again, The Legion arrived from the future to stop him; Rokk Krinn used his magnetism powers to steal his Atomic Axe, Imra Ardeen used her telepathy to make him stop fighting, and then Garth Ranzz finished him off with an electric attack. Rokk then removed the Legion ring from the Persuader's finger, causing him to automatically transport back to the 31st century.

There have been three individuals to use the "Persuader" name but only the first one, Nyeun Chun Ti, was a member of the Fatal Five, living in the 31st century.

The Persuader was one of five outlaws recruited by the Legion of Super-Heroes to help them combat the Sun-Eater in exchange for amnesty for their crimes. The villains later turned on the Legion and formed the Fatal Five, becoming one of the Legion's most notable threats. The Persuader wielded an "atomic axe" on a long shaft, resembling a halberd. This axe could reportedly cut through anything, occasionally including purely metaphoric or intangible things, such as a person's air supply, the force of gravity, or the separation between dimensions, and followed the Persuader's mental commands. The Persuader came from a heavy-gravity planet and while he possessed no superpowers, he had enhanced strength and endurance.

He was relatively unchanged following the Legion Reboot. In the Teen Titans/Legion crossover that ended the Reboot Legion, the Persuader had used his axe to cut through Hypertime, thereby teaming Fatal Fives from various universes as the Fatal Five Hundred. He had a daughter that visited him while he was in prison.

The Persuader did not appear in the Threeboot Legion continuity.

The other individuals that used that particular alias were Cole Parker, a factory worker, who was inspired by images of Superman fighting a holographic Fatal Five and Elise Kimble, an ancestor of the original Persuader of the 31st Century.

Other faces of Persuader 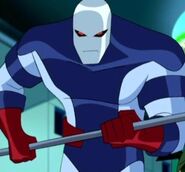 David Sobolov as the voice of Persuader in Legion of Super-Heroes.