Smallville Wiki
Register
Don't have an account?
Sign In
Advertisement
in: Season 11 characters, Season 11 villains, Characters in the comics,
and 4 more

Oswald Loomis is a criminal working for Intergang under the alias of The Prankster as there weapon designer and hitman.[1] He knows Batman. He first appears in the second digital/print comic Smallville Season 11 story arc Detective.

Oswald worked for Queen Industries in Research and Development (along with Winslow Schott) before he started to work for Intergang as their weapons designer until they started to deam his work unnecessary. However after Intergang found out that one of their weapons dealers/contacts, Joe Chill was about to reveal information about them, Oswald decided to prove his worth by killing Joe Chill, The Batman, and Superman for them and hired Gotham City's criminal Mr.Freeze to help.

Oswald hired thugs to steal items from LexCorp in order to get control chips inside of weapons created to take down Metahumans and Heroes alike. However Green Arrow and Superman busted one of their attempts.

Later Oswald finds out where Joe's safe house is and with Mr.Freeze attempt to kill him, as well as Superman and Batman. At the safe house, Chill, a lifelong criminal, isn't exactly repentant about killing Batman's parents, whoever they were. Batman can't be specific and Chill has killed a lot of people for lots of reasons. This isn't good enough for Batman, who loses it, until Superman literally slaps him down. Superman calmly explains to Joe Chill that they're really here to find out where they can find a man named Loomis, who they believe is manufacturing the weapons Chill fenced for Intergang. However they didn't have to look very far because Loomis was already there. Batman and Superman spring into action with Heat Vision and Batarangs, but a burst of cold takes out both. Loomis isn't alone. He has help from Mr. Freeze.

Superman and Batman are fighting Prankster and Mr. Freeze. Batman reveals that Mr. Freeze is Victor Fries. Prankster reveals that he wants to prove himself to Intergang. While Superman tries to distract the villains, Batman and Joe Chill try to escape. Superman gets shot by Kryptonite bullets while Mr. Freeze kills Joe Chill and frames Batman for the crime. When Batman frees himself, he finds out that Chill is dead, and Superman is critically wounded. The FBI comes in to arrest Batman. Batman escapes with Superman within the Batmobile.

Meanwhile, Prankster and Mr. Freeze track Superman and Batman to where they are hiding: on a Freighter ship called the Leviathan. At the dock near the Leviathan: agents of Intergang kill a dock worker, then proceed (heavily armed) to enter the ship, where Daily Planet reporter Lois Lane and Nightwing are the only ones there. At their hideout; as Intergang enters Leviathan, and Freeze prepares himself, Prankster says that Freeze's job isn't done yet, and double-crosses him by shutting down his suit using his own upgrades. As Prankster says, he wants to show the world what it really means "to get pranked."

At Nellis Air Force Base outside Metropolis: two military personnel are commenting over one's new Captain Carrot toys when the alarm goes off because the armed UAVs (unmanned air vehicles) are going online, unaware that they are being controlled by those same Captain Carrot toys.

At Freeze's hideout: Superman and Batman find no one there, at least until Prankster appears using a robot Toyman was developing, complete with Kryptonite on the chest. He reveals that Freeze is under his control, and is attacking the citizens, but in actuality, his suit's fuel cells are overloading, and will explode. And with Freeze above the city's water purification plant, anyone within one mile will die. Batman heads out in the Batboat to take care of Freeze, while Superman goes to handle Prankster.Prankster and Superman hold their own, until Superman's armor is destroyed thanks to Prankster's robot suit. Even with the Kryptonite now affecting and blinding him, Superman notices an area of the robot suit with its wires exposed. Superman then takes the wires and uses his heat vision to short circuit the suit. With Prankster out, and both the robot suit and Kryptonite buried behind rubble, Superman wins the fight.

Superman asks Prankster if working with Intergang was worth it, but Prankster says it was awful and didn't like working with them, and it wasn't until Superman and Batman's appearance that drove him to outsmart them before they got tired of him. When Prankster says that the blood of Intergang will be on Superman's hands too, Superman says "what did you do?" with Prankster replying "I won." Just then, the armed UAVs fire on Leviathan, with Intergang, Nightwing and Lois still inside, and it begins to sink...until Superman saves the day by lifting the ship up before it sinks with Green Arrow and Batman stopping Mr.Freeze, therefore defeating the Prankster once and for all.

The original Prankster is Oswald Loomis, a criminal and conman who uses elaborate practical jokes to commit crimes. Comedian Oswald Loomis is the host of the long running children's variety show called The Uncle Oswald Show. When the ratings begin to fall, the show is canceled by its network WGBS. Loomis finds himself typecast and unable to obtain new employment. Bitter that his gravy train has come to an end, Loomis seeks revenge on the network executives that were responsible for his show's cancellation (including Morgan Edge), but is foiled by Superman. This turned out to be an intentional objective for the Prankster since he knew he could not seriously oppose Superman, and so immediately surrendered upon facing the superhero with plans to exploit the media attention while in prison.

In his debut in Action Comics #51, the Prankster and his assistants break into a series of banks and force the employees to accept money. They even throw money to people in the streets. After he becomes famous for this joke, the Prankster enters into yet another bank - and this time takes all the money, also taking Lois Lane hostage. Superman, who had suspected the Prankster was up to no good, follows him to his lair. The Prankster seals his henchmen and Lois behind a sheet of glass and releases deadly gas, but Superman manages to rescue them and retrieve the money, but the Prankster is able to escape.

The Prankster returns to plague the Man of Steel throughout the Gold and Silver Age. One of his more novel schemes was seen in Superman #22 (May/June 1943). The Prankster, with the backing of several criminal leaders, files a copyright to own the English language. Once he gains legal ownership of the alphabet, the Prankster begins requiring payment of anyone using the written word. Superman is at first unable to do anything, as the Prankster is not breaking the law. Eventually, Superman discovers that the Prankster had hired an impostor to replace the registrar at the copyright office, and he turns the Prankster over to the authorities. After Toyman's first confrontation with Superman, Schott met the Prankster for the first time.The Prankster, however is a cruel, callous man who commits crimes "because it's fun." He repeatedly asked Schott to "team up", but Schott refused every time, because the only reason he hurts people is because "they deserve it".

The Prankster's final Silver Age appearance is in the Alan Moore scripted story, Whatever Happened to the Man of Tomorrow? (Superman #423). The Prankster, along with the Toyman, are unwittingly manipulated by Mister Mxyzptlk to discover Superman's secret identity. They succeed after kidnapping Pete Ross and torturing the information out of him, then killing him. After managing to unmask Clark Kent in front of Lana Lang and others by machine-gunning him and revealing his costume beneath his clothes, the Prankster and Toyman are captured by Superman.

Later, Loomis reappears with a younger, more athletic body, presumably by Lord Satanus. His personality is changed as well; no longer an inept goofball, he is now a manic trickster seeking to unleash his twisted brand of laughter upon the world. By this time, Metropolis has been upgraded by Brainiac 13. The Prankster takes advantage of the new technology, creating high tech gadgets and weaponry, which retain a comical theme. He quickly challenges Superman again. Superman is suffering from Kryptonite poisoning during the battle, and is hospitalized in S.T.A.R. Labs shortly thereafter.

During the Critical Condition storyline, scientists learn that the cause of Superman's illness is a nanovirus carrying a small grain of Kryptonite. They proposed to shrink Steel, Superboy, and Supergirl to microscopic size, and send them into Superman's bloodstream to destroy the virus. However, the Prankster subdues Steel, steals his armor, and attempts to sabotage their efforts. He uses the armor to attack a temporarily powerless Superboy before Steel arrives on the scene, taking control of his hammer via a remote failsafe and damaging the armor due to his knowledge of its weaknesses. The Prankster escaped via teleportation.

The Prankster is later hired by Lord Satanus to kidnap Metahumans with dual personalities, particularly those with a light/dark duality. Satanus hopes to gain strength by drawing power from the darker personalities of these individuals. Superman foils this scheme, and the Prankster disappears after Satanus is defeated. When Manchester Black reveals Superman's identity, the Prankster is one of many villains involved in the campaign to destroy Superman's life, though he forgets Superman's identity when Black is defeated. In a One Year Later storyline, the Prankster is hired by Lex Luthor to wreak havoc in Metropolis. While Green Lantern and Hawkgirl bring down Loomis and his army of traffic-light-men, his rampage is just a distraction while Luthor breaks Kryptonite Man out of prison.

Apparently inspired by his turn working for Luthor, Prankster has taken on a new persona as a distraction-for-hire. Rather than pull off crimes himself, he is now hired by criminals to distract Superman and the police with his pranks while they commit crimes. He offers a discount to any client whose plans include Superman, as he sees the Man of Steel's involvement as "the best kind of free advertising." His new venture has apparently proven quite lucrative, as he is able to afford a high-tech lair. Above it sits a seemingly normal joke shop called 'Uncle Oley's Sure Fire Joke Shop'. It is not normal, for it includes a movable trapdoor. The Prankster also has about a half-dozen beautiful female assistants, who do many things for him, such as monitoring Metropolis or serving him breakfast. Though the Prankster goads them to commit pranks on him, they do not always do so, for they fear his retaliation. He insists on never sharing his high-tech gadgets with clients, considering himself "an artist, not an armorer."

Most recently, he has been seen among the new Injustice League and is one of the villains featured in Salvation Run. Prankster was among the many of Superman's villains who was rounded up and placed in the Phantom Zone by the people of Kandor. Superman freed Prankster to be taken to Belle Reve.

Other faces of the Prankster 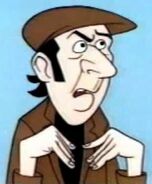 Prankster in The New Adventures of Superman.

Howard Morris as the voice of Prankster in 1988 Ruby-Spears Superman animated series. 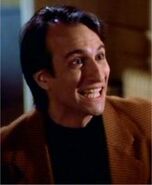 Bronson Pinchot as Prankster/"Kyle Griffin" in Lois & Clark: The New Adventures of Superman. 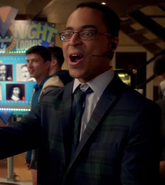 Jesse Reid as Oswald Loomis in The Flash (2014)