Smallville Wiki
Register
Don't have an account?
Sign In
Advertisement
in: Season 4 characters, Characters in the comics, Characters with mind control,
and 6 more

Mxyzptlk powers can be jammed by a frequency blockage designed to emit on the same frequency used by his powers. This frequency jammer can be produced using radio technology, or it can be produced naturally by a swarm of locusts.

Mikhail came from a line of people who lived near the Balkans and can "control the hand of luck". He was chosen as an exchange student through an organization set up by LuthorCorp.

During the decisive game to see who will go to the state championship and the Smallville Crows. Mxyzptlk meets Chloe Sullivan in the deserted field house and bets $80 on Smallville to win and Mikhail accepts her wager. They both return to the game, where the Crows are on defense. Mikhail mutters to himself and the Crows player drops the ball. Clark saves the fumble but when Mikhail says, "Trip," he severely injures an opposing player, as the touchdown is good. The Crows win the game.

Mxyzptlk that has been awarded a LuthorCorp scholarship. Lex Luthor questions why Lionel Luthor would award Mikhail such a prestigious award because he is a barely-average student. He asks what potential Lionel saw on him and Mikhail replies that it is potential that doesn't show up on a report card.

Later Mikhail goes to Smallville Torch office to talk to Chloe. She reveals that his bet was part of his investigation into a school of football betting ring and she wants to give Mikhail a unique. He agrees, if she keeps his name and put a big bet on the Metropolis Sharks next game.

When Mikhail is waiting for Chloe at the Torch office. She arrives with an armful of shopping bags. She talks about how he was anxious to win his bet and Mikhail suggests that it does not spoil the fun and stop writing the article. Chloe replies that his story is getting juicier by the minute and Mikhail pulls her closer. He uses his power to force her to kiss him and says she'll stop the article.

During the game, Chloe rewires the loudspeaker and Mikhail hears a high frequency and covers his ears. He tries to influence the players but it doesn't work. The Crows pull ahead and Mikhail gets up to investigate. He finds Chloe and they struggle. The Crows are one touchdown away from winning, but Mikhail appears on the field during a timeout. He shows Clark Chloe's press pass and tells Clark that if they score another touchdown he will kill her. Just as the play is about to start, Clark X-rays the wall of the field house and sees Mikhail holding a knife to Chloe's throat. Clark throws the last pass, superspeeds off the field, shoves Mikhail into a shelf and breaks Chloe's bonds. He then speeds back onto the field to complete the play and win the game.

After Mxyzptlk was arrested, Lex Luthor gained custody of him and took him to a mysterious Level 33.1 beneath the Metropolis LuthorCorp Plaza building where, as Luthor said, Mxyzptlk's powers would return to him.

Years later it is revealed that Mikhail is the nephew of the Russian Prime Minister. When he meets with Lex Luthor to talk about the fallen Monitor in Moscow, the Russian leader says he granted Lex the privilege of seeing him first out of gratitude because he helped his nephew with his metahuman condition.

In the comics, Mxyzptlk (the original spelling) was introduced in the Golden Age as an imp from the "fifth dimension". Not being bound by our physical laws, he can do things that seem to be magical. In his first appearance, Mxyztplk wreaks havoc across Metropolis by using his powers to pull all manner of pranks, first pretending he got hit by a truck and killed, then increasing his weight when the ambulance gets there. What's more, he destroys Superman's worldview of himself. Mxyztplk jumps out a window, fooling Superman into thinking Mxyztplk is committing suicide. When he appears unharmed, an astonished Superman exclaims "I-I thought I was the only man who could fly!!" Mxyztplk soon tells Superman that he is a jester in his home dimension, explaining why he uses his powers to play practical jokes. But one day he found a book which told him of this world.

Originally, Mxyztplk has designs on conquering the planet for himself, but soon settles for tormenting Superman whenever he gets the opportunity. His only weaknesses are that he cannot stand being ridiculed and if he says or spells his name backwards, Klptzyxm (kil-pit-ZEE-zim /kɨlpɨtˈziːzɨm/), he is involuntarily sent back to his home dimension for a minimum of 90 days. Mxyztplk often looks for ways to counter the latter weakness, but he always proves gullible enough for Superman to trick him time and time again. In the Golden Age, saying "Klptzyxm" will not only bring Mxyztplk back to the fifth dimension, but would bring anyone else saying it to the fifth dimension. To return to his/her home dimension, one has to say his/her own name backward. In the comics, Mxyzptlk sacrificed his life for Superman when a villain named Ruin tried to kill the hero with kryptonite weaponry.

In the New 52 Universe, Mxyzptlk's history is revealed. He was a traveling wizard in the 5th dimension who entertained the King-Thing Brpxz of Zrfff. He did so by making 333 different 3 dimensional worlds, as well as by challenging heroes in each world, with everyone being entertained by the one hero who could win the challenges, Superman(Mxyzptlk and the king's favorite trick because he is the one who out smarted Mxyzptlk every time). This lead to Mxyzptlk becoming the king's favorite entertainer, as well as winning the love of the king's daughter, Gsptlnz. However, it also led to jealousy to the now deposed original court magician, Vyndktvx. Vyndktvx eventually went mad and tried to kill Mxyzptlk, only to kill the king instead. Vyndktvx was, however, able to frame Mxyzptlk for the murder.

He came to Earth under the guise of the "Mystic Mr.Triple X", who was a magician who played for royalty. Gsptlnz used one of her wishes in order to bring her and Mxyzptlk together again but it was eventually short-lived, because a rival magician (Vyndktvx in disguise) messed with one of his tricks, leaving Mxyzptlk in a coma for 7 years and counting.

Other faces of Mxyzptlk 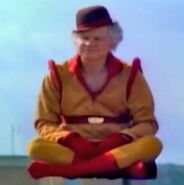 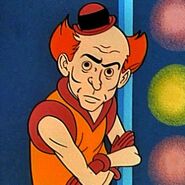 Mxyzptlk in The New Adventures of Superman. 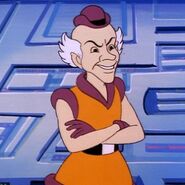 Frank Welker as the voice of Mxyzptlk in Super Friends.

Howie Mandell as Mxyzptlk in Lois & Clark: The New Adventures of Superman. 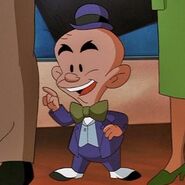 Gilbert Gottfried as the voice of Mxyzptlk in Superman: The Animated Series. 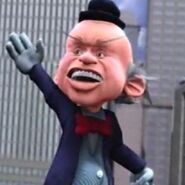 Dwight Schultz as the voice of Mxyzptlk in Superman Returns (videogame). 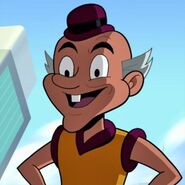 Kevin Michael Richardson as the voice of Mxyzptlk in Batman: The Brave and the Bold. 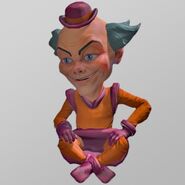 Clark: I'm watching the sports editor's tape of the game, trying to figure out what happened, but... It's like I had no control, like my mind was sending one message, but--
Chloe: But your body was getting another.
Clark: Yeah.
Chloe: It's Mikhail.
Clark: The foreign exchange kid? Mix-uh
Chloe: Mxyzptlk. Say that three times fast. He's our new resident puppet master. This is kind of embarrassing, but he made me kiss him.
Clark: (looks lightly doubtful) Made you.
Chloe: Yeah. It was just like how you explained your trip. It was like someone else was controlling me.

Chloe: (reading the computer) It's some legend from the Piatore region in the Balkans. That's near where Mikhail's from.
Clark: It says the region has been terrorized for centuries by a bloodline of people who have-- who can control the hand of luck.
Chloe: It's not exactly luck if they're controlling people. What does it say about the backwards name?
Clark: The family changed their name a century ago and fled the area to escape the stigma after the village mysteriously burned to the ground.
Chloe: Looks like Mikhail's still running from his heritage. (she comes back to the computer) It doesn't exactly say how to stop the kissing bandit, does it? (noticing something on the screen) Oh, here. According to the legend, the only thing that stopped them was a plague of locusts.

Chloe: (handing the file to Clark) Well, when locusts swarm, they emit an energy wave to avoid crashing into each other. Maybe Mikhail's commands operate on a similar frequency, you know, like a radio signal.
Clark: Or a dog whistle. The sound travels, but the human ear doesn't pick it up.
Chloe: Yeah. Now, what's interesting is that once locusts' signals are jammed, they can't fly anymore without running into each other. It's permanent.
Clark: Well, maybe all we have to do is find something that will jam Mikhail's frequency for good.