Michael Owen Rosenbaum (born July 11, 1972, in Oceanside, New York) is an American actor best known for portraying Lex Luthor on Smallville. Rosenbaum ended his popular turn as Lex in May 2008 with the conclusion of Season Seven of the show, and briefly reprised his role in the series finale.

Michael also directed Season Six's Freak. He described it as "the biggest challenge of my life." [1]. When asked if he would direct another episode, Michael answered that "if the fans like my episode, I will do it!" According to TV.com, Freak got an average fan rating of 9.5/10, rating it as the 18th most popular episode ever [2].

Continuing in the comic book genre, he has performed as the voice of Wally West (a.k.a Kid Flash & Flash), in the DC Comics animated series Teen Titans and Justice League. Rosenbaum has also done film and voice over work.

Although born on Long Island, Rosenbaum was raised in Newburgh, Indiana. He graduated from Western Kentucky University in Bowling Green, Kentucky with a degree in Theatre Arts, then immediately moved to New York City to become a professional actor.

Rosenbaum is also known for his love of ice hockey, a sport he grew up playing. He is an ardent New York Rangers fan, and can often be seen playing in charity hockey games.

After nearly a year of will-he-or-won’t-he speculation, Michael Rosenbaum agreed to reprise his role as Lex Luthor in Finale, marking a 1093 day return (or 2 years and 363 days, almost 2 days before the third anniversary of his last appearence in the series.) since he was last in the series.

Michael Rosenbaum confirmed that Season Seven's finale would mark his last regular appearance on the show in May 2008. Rosenbaum wrote a good-bye letter to fans, which can be read here on KryptonSite. He also gave an interview following his announcement with Superman Home Page which can be read here. The Smallville Wiki community would like to say thank you very much to Mr. Rosenbaum for the seven memorable years of hard work and dedication he put into his character and wish him luck in his future endeavors.

It was confirmed that Rosenbaum would return for the last episode of the final season.

In September 2019, Michael Rosenbaum was approached by Warner Brothers about appearing in the Arrowverse's Crisis on Infinite Earths crossover (together with Smallville alumni Tom Welling and Erica Durance). Rosenbaum passed on their offer. Warner Brothers (who demanded an answer right there and then) had given him no script, no idea of what he would be doing and when he would be filming.[1] Crisis Executive Producer, Marc Guggenheim later hinted at what the plan was to incorporate Smallville's Lex Luthor, had producers and Rosenbaum been able to work out terms. "We had a version where he would have been in the scene [on the Kent farm] with Tom, and then the clock ran out on that [due to Welling’s availability]. I then had the idea of having [Michael] and [Supergirl‘]s Jon Cryer have a scene together, which would have been really, really cool." [2]

Homages to Smallville in other projects

NA
The Flash (voiced by Rosenbaum) in Justice League Unlimited in the episode "The Great Brain Robbery" where Flash switched minds with Lex Luthor, giving Rosenbaum the opportunity to voice Lex's animated counterpart.

The show Breaking In where Dutch (Rosenbaum's character) made a big deal of wearing a Superman shirt. 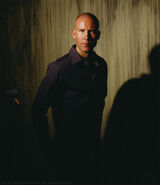