Smallville Wiki
Register
Don't have an account?
Sign In
Advertisement
in: Season 10 characters, Characters in the comics, DC Universe characters,
and 12 more

"I am Mera, wife of Orin, future king of the Seven Seas. The one you call Arthur Curry." --Mera to Lois Lane, Patriot.

Mera is an Atlantean native and Arthur Curry's wife.

Mera is a very beautiful woman, with a magnificent figure and not remotely shy about it. She has long red hair and a somewhat heartshaped face, often wearing a snide and impish sort of smile. While in combat she wears a black and green wetsuit with short pant legs, but in normal situations, she wears a green swimsuit.

Mera is a very strong woman with a sense of justice, which in fact led her to fall in love with Arthur upon seeing his own commitment and dedication to justice. Mera also seems to have a heightened sense of arrogance about both herself and Arthur. She has no issue name dropping Arthur's full title as King of Atlantis, nor does she have issue talking down to Lois and insulting her relationship with Clark, believing that it purely the latter's superiority as a being that draws the former, a lesser being, to Clark and not affections that they may have for each other. However, she does seem capable of realizing her mistakes in judgment and is able to apologize to Lois without problem. She also has very little modesty and had no qualms in getting naked in Lois' presence, in fact she enjoys how uncomfortable she made Lois.

If deprived of water or exposed to significant heat such as heating lamps, the heat will dry out her skin.

At some point, Arthur Curry met the woman known only as Mera, during which she helped him to not only understand his true origins as Orin, but also his destiny as king of the seven seas. Although at first Arthur was uncertain of Mera, they eventually fell in love, became partners and were married.

Spoken like one who can't be satisfied by a man of her own kind. You desire those who are extraordinary - first Orin, then Oliver, now Clark. -Mera to Lois Lane (Patriot)

Soon after their marriage, Arthur and Mera discovered that Slade Wilson was building prisons for super-heroes following the passing of the Vigilante Registration Act and destroyed one of them.

Clark Kent went to confront Arthur about this, but Mera, deeming him a threat, knocked him aside with her hydrokinesis.

As Clark and Arthur went off to investigate Slade's operation further (resulting in Arthur being kidnapped), Mera was confronted by Lois Lane, who was trying to help Clark. At first, Mera deemed Lois a lesser being compared to herself, Arthur, Oliver Queen and Clark, until Lois managed to help them save Arthur with information on the prisons, causing Mera to balk on the spot. Mera managed to rescue Oliver and Arthur.

Later, before leaving town with Arthur, Mera apologized to Lois and admitted that she is a worthy partner of equal standing for someone like Clark and even encourages her to give Clark time to cope with Lois being by his side. She also complimented Clark for being the perfect "patriot", being an example for the people instead of acting against those who rebel against them.

The origins of Mera are not clear, but what was originally believed was that she came to earth from a watery dimension early on in Aquaman's career after fleeing from the villain known as Leron, who seized control of her kingdom. Mera soon befriended Aquaman in her first adventures after he assisted her in defeating Leron.

This story was revealed to be false during the events of Brightest Day (which technically retconned her origins), where it was revealed, that Mera's true origins were that she was from a sect of Altanteans who were exiled from Atlantis for attempt to overthrow the ruling class. Mera and her younger sister were trained from birth to be the ones who would get revenge for their people, by killing the King. Mera was sent out to kill Aquaman, but instead fell in love with him. The two were married, making Mera the Queen of Atlantis.

Some time afterward, they had a son named Arthur Curry Jr., also known as Aquababy. The child was murdered by Aquaman's nemesis Black Manta. The trauma from said incident and the strain placed on their relationship would drive her to leave her husband and return to her home dimension.

It was later revealed that Mera had been brainwashed by Aquaman's enemy Thanatos, who held her captive in the hellish dimension known as the Netherworld, though she was freed with the assistance of her husband. She remained estranged from Aquaman, despite hints of lingering affection, and reigned as the Queen of Atlantis after Aquaman's exile. However, she was merely a puppet queen for the Sorcery Elite and was punished by the sorcerers of Atlantis when they attempted to turn her into an air-breathing human. Atlantis was sent back in time by Tempest during the Imperiex war. When it was restored with the help of the Justice League, Mera became queen of Atlantis, while Aquaman was in exile.

After the events of One Year Later, Mera regained her water breathing abilities, if not her full strength, and became the leader of a small rebel army, taking under her protection some refugees from the lost Atlantis and the new Aquaman. This small group was determined to rebuild Atlantis after it had been destroyed by the Spectre. Unfortunately, Mera had to deal with the death of her beloved Aquaman, an event that forever changed the Queen of the Seas.

During the Blackest Night, Mera, Tempest, and a few Atlanteans attempted to relocate the body of Aquaman and return it to the royal tomb in Atlantis. Mera and the group were shocked to discover that her beloved's burial ground had been desecrated and that Aquaman had seemingly returned to life as a Black Lantern. He was soon joined by Tula and Dolphin, who were bent on the group's destruction. Believing this to be some sort of mind trick, a battle began between the Black Lantern Aquaman, Tula, Dolphin and Mera, Tempest, and a few Atlanteans. Mera was able to seemingly murder Dolphin, only for the zombie to regenerate. In the end, Tempest and the Atlanteans were killed, which allowed them to become Black Lanterns. Aquaman demanded that his love stand by his side so their deceased child could also be with them. Mera ignored this and fled into the ocean. She later met up with Flash and The Atom, helping them to fight off more Black Lanterns. As war with the Black Lanterns continued, Mera was driven into a rage, allowing her to become a deputy Red Lantern when a power ring latched onto her finger. With a heart full of hate, Mera continued the battle against death and briefly held her own against Wonder Woman who had become a deputized Star Sapphire after being freed from the control of the Black Lanterns.

In the aftermath of Blackest Night, Mera witnessed Aquaman rise from the dead through the white light and thus allowed her rage to subside. When the Red Power Ring left her, Mera immediately went into cardiac arrest since the power ring acts as the heart of a Red Lantern.With the help of Saint Walker and Carol Ferris, the effects of the red ring were reversed and Mera was reunited with her husband.

In the New 52, Mera follows Aquaman, who decided to return to Amnesty Bay because of the rejection faced from his fellow Atlanteans and his poor standing as a superhero, helping her husband find a new place in the world, despite being saddled from the same ill reputation as the almost useless "Aquawoman". It is shown that Mera has difficulty adjusting to society on the outside world and severe problems controlling her anger. She also aids Arthur in trying to uncover the mystery behind the sinking of Atlantis.

Following the Throne of Atlantis storyline, Mera is approached by the police forces to arrest her again for violent assault following an outburst of temper in town. Mera and the police officers discuss civic virtues and she is confronted by Officer Watson, a former classmate of Arthur, who reasons with her and tells her to stop being hostile. She also tells her that she needs to respect the law and society on the surface. As Mera concedes, she and the police officers are attacked with the winter storm by the Dead King, the first king of Atlantis, demanding her to lead him to the Xebel location. The Dead King drags Mera to the Bermuda Triangle and opens the Xebel barrier, but Mera manages to escape from the Dead King. When Mera returns to her previous home of Xebel to warn them, it is revealed that she was betrothed to Nereus who is the current king of Xebel. Nereus is angered when he discovers Mera is on the side of Atlantis and lover of Aquaman. Mera and Nereus are later frozen in ice by the Dead King planning to rule the Seven Seas once more. Aquaman arrives to free Mera and confronts the Dead King. During the fight, Mera frees Nereus and Xebel soldiers to help Aquaman against the Dead King, but Nereus and Xebel soldiers are bowing to the Dead King, claiming he is the true king of the Seven Seas. Mera and Aquaman succeed to escape from the Xebel soldiers and arrive to Atlantis, which is under attack by Scavenger and his men. During the battle Aquaman falls into a coma for six months. When he wakes up, Aquaman asks what happened to Mera during the time he was in a coma and Vulko says he saw Mera facing the Dead King. Later, it is revealed that Mera was imprisonment by the Dead King and Xebel soldiers who have taken over Atlantis. Mera refused to marry Nereus and warns him that she will kill him if she gets free. Aquaman then arrives to free Mera and the Atlanteans to battle the Dead King and the Xebel soldiers. When the Dead King is defeated, Nereus and the Xebel soldiers retreat, Mera reunites with Aquaman and decides to remain in Atlantis with him.

Other faces of Mera 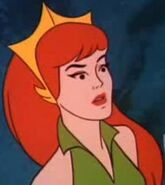 Diane Maddox as the voice of Mera in The Superman/Aquaman Hour of Adventure. 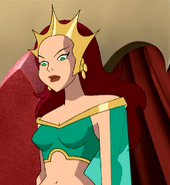 Kristin Bauer van Straten as the voice of Mera in Justice League. 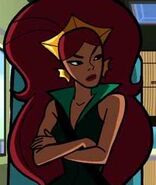 Sirena Irwin as the voice of Mera in Batman: The Brave and the Bold.

Kath Soucie as the voice of Mera in Young Justice.

Sumalee Montano as the voice of Mera in Justice League: Throne of Atlantis.

Susan Eisenberg as the voice of Mera inn Aquaman: Rage of Atlantis (2018) 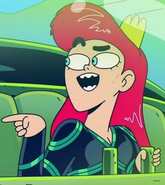 Gillian Jacobs as the voice of Mera in Aquaman: King of Atlantis (2021)