Smallville Wiki
Register
Don't have an account?
Sign In
Advertisement
in: Season 8 characters, Aliens, Characters in the comics,
and 10 more

"I promise, just one kiss, and you will see that I was meant for you." - Maxima, Instinct

Maxima is an alien queen from the planet Almerac.

She came to Earth searching for her "soul mate" to marry a Kryptonian who would be Clark. She made her advancements first on Jimmy Olsen and then finally on Clark and even tried to kill Lois in her attempt to mate with Clark. Clark rejected her and was able to send her back to Almerac using her bracelet.

Maxima has long red hair and, on her home planet of Almerac, wears native revealing deep green clothes; her clothing is similar to S&M fashion.. On Earth, she dressed in more conservative clothes, wearing a green dress that she stole from Tess Mercer, believing that it was sent by the Kryptonian who sent the signal.

Maxima also always wears a bracelet on her wrist, which can teleport her vast distances through interstellar space.

Maxima is queen on her home planet of Almerac. Since she was a young girl, she heard stories of the gallant men from the planet Krypton and knew that she would marry a Kryptonian who was worthy of marrying a queen. Although Maxima is forceful, spunky and seductive, she is easily threatened by other women who may get in the way of her and her soul mate. However, she is also not a bad person; she expressed regret when she kissed Jimmy Olsen and he almost died.

As an Almeracian, Maxima has exhibited several powerful abilities which make her a considerable physical opponent to the likes of Kryptonians and Martians. Being the Queen of Almerac and one of the elite royal family, Maxima may possess stronger abilities than common Almeracians.

In addition to these powers, Maxima also has access to a bracelet that allows her to instantaneously teleport between Earth and Almerac.

Maxima is heir to the royal family of Almerac. As a child, she heard stories of the gallant men of Krypton and she swore to oneday marry a Kryptonian as her king and "soul mate". She ascended the mantle of queen soon into her late teen or early adult years.

Maxima came to Earth after her home planet of Almerac received a signal that originated from the Crystal of Knowledge after Tess Mercer and her team began testing on it. She followed the signal to Earth and arrived in Metropolis, where she was greeted by a random passerby. She believed him to be the one who sent the signal and kissed him. After the kiss, the man fell to the street and died.

Maxima then traveled to Smallville while kissing many men she encountered along the way. She was heading to the source of the crystal's signal: Luthor Mansion. She then grabbed a dress that Oliver Queen had sent to Tess with a note that asked Tess to meet Oliver at the Ace of Clubs.

Maxima went to the club instead and met Jimmy Olsen, whom she kissed. After realizing Jimmy wasn't the Kryptonian she had been searching for, Maxima left just as Clark super-speed past her to save Jimmy and take him to the hospital. Maxima saw Clark running in super speed, and realized he was Kryptonian.

Maxima then tracked Clark down to the Daily Planet and kissed him; they began to embrace and grope each other before getting in the elevator. The elevator doors opened to reveal Lois Lane, who was shocked to see Clark and Maxima, and walked off, clearly upset. Clark ran after Lois who told him that Maxima left.

When Lois was getting into her car, Maxima confronted her, telling her that she could sense the love between Lois and Clark and that he wouldn't have been able to resist her had Lois not arrived. Just then, Tess' security team arrived. Maxima killed all of them before turning her attention back to Lois, but before she could kill her, Clark grabbed her and super-sped away. Maxima told Clark that she had been searching for him her whole life and that he was her soul mate, but Clark distracted her and activated her bracelet, sending her back to Almerac unwillingly.

Oldest child of the Royal family of the planet Almerac, the fiery-tempered Maxima came to Earth in search of a suitable mate to father her heir, leaving behind Ultraa, her betrothed. She and Superman are genetically compatible; she could give him what no Earth woman could - children. She was infuriated when Superman rejected her sexual offers, saying he had no desire to father despots. Maxima became an enemy to Superman after that.

Maxima later found herself reluctantly working with Brainiac who had destroyed Almerac with the Warworld. She turned against him, and helped Earth's heroes defeat him, subsequently joining a reformed Justice League for her own reasons after the League saved Almerac from Starbreaker. As a Leaguer, she helped in the fight against Doomsday, and when that version of the League disbanded, she became a member of Captain Atom's Extreme Justice. She considered both Captain Atom and Amazing-Man as potential mates, but neither were interested. During the period of her flirtation with Captain Atom, an angry jilted Ultraa attacked him. Maxima eventually stopped the brawl and sent Ultraa back to Almerac. Maxima died in battle stopping Brainiac 13.

In the comics she did not have the endorphin kiss as a power but she did have telekinesis.

Other faces of Maxima 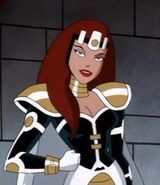 Sharon Lawrence as the voice of Maxima in Superman: The Animated Series.