Detective (formerly lieutenant) Maggie Sawyer is an officer for the Metropolis Police Department.

Maggie's tough, no-nonsense attitude to her work has made her many enemies in the criminal underworld that is Metropolis and has been assigned to work on many high profile cases including the murder of Lionel Luthor and suspect Jack Jennings. She also takes no prisoners regardless of motives like when she arrested Clark Kent and Chloe Sullivan for being in a strip club while being underage.

When Martha Kent and Lionel Luthor were being held hostage in LuthorCorp Tower, Maggie Sawyer tried to help the situation, as well as meet Clark and Jonathan Kent for the first time.

She led the response to the bank robbery perpetrated by a bullet-proof bank robber who disappeared into thin air.

She responded to Chloe Sullivan and Lois Lane after they witnessed a hit-and-run: she led the response to the strip club at which Clark, Chloe and Lois were working undercover.

She asked Lex Luthor to identify his father after his death.

A thug wearing a LexCorp teleporter vest takes a schoolbus with children hostage which is suspended in the air by a crane. Across town, the Metropolis Special Crimes Unit headed by Dan Turpin along with Maggie Sawyer, is dealing with a hostage situation. There's a school bus suspended high above the streets by a crane and some thugs wearing high tech teleportation vests are holding young children hostage. One child decides to get Super heroic, opens up his shirt to reveal a Superman logo underneath, as well as thinks he can zap one of the bad guys with heat vision. Instead of getting his head blown off, the boy is saved by real heat vision melting the gun and the real Superman ripping through the roof and hefting the bad guy into the sky. The rest of the thugs teleport away then reappear and open fire on the police. Superman saves the kids. Ready to go to LexCorp.

After he takes care of the bomb, Superman round up the teleportation thieves who apologize to the children for kidnapping them, hitching their school bus up on a crane, as well as then trying to blow them up with a bomb. As Superman politely soars off with one of the teleportation vests, Dan and Maggie meets Bruce Wayne and Barbara Gordon visiting Metropolis who got to see Superman in action first hand. Barbara is more impressed than Bruce is, or more impressed than Bruce is letting on.

Months later at Metropolis National, Dan Turpin and Maggie Sawyer as well as other members of the Metropolis police department are pinned behind the car wondering where Superman is at, to which they see him fly in his new Green Lantern uniform. As the criminals duck in shock, they proceed to fire their missiles. Clark and the police look on in shock as Superman attempts to get all the missiles, when all of a sudden the ring creates a giant Superman construct thus destroying the remain weaponry, causing the terrified bank crooks to flee surrendering to the police.

Oliver Queen confronts Officer Turpin and Sawyer at the crime scene that Superman intervened in. He questions the officers trying to figure out what were the criminals trying to steal in the first place. Both officers refuse saying that they can't because then they have to tell their superiors they told capes sensitive information. Which leads Ollie to bluff, saying that his tech team is sifting through their crime data as they speak. Turpin revealed they don't know much, and Maggie says the amount of cash didn't warrant the giant robot, leading Oliver to wonder the motives of the mastermind.

At Metropolis P.D., Dan Turpin asks Maggie Sawyer if Bryce Gordon, who is still in custody, has said anything but she says they are waiting for his lawyer and Dan suggests they should call for a priest instead, as the spell should have been lifted from Gordon when Superman smashed the gem. Suddenly, a possessed man enters the police station saying "No spell can leave his wrath from this mortal coil" and then a group of also possessed civilians attack the surprised police officers. Sawyer and Turpin are ready to fight the intruders but they also get attacked by Gordon, who shouts along with the others "We are Eclipso".

The character of Maggie Sawyer appears in both Batman and Superman comics. She was introduced in 1987 as a captain in the Special Crimes Unit (SCU). She originally comes from Star City. She was married and had a daughter but divorced when she discovered she is a lesbian and entered a relationship with Toby Rains of the Metropolis Star. She has a close working relationship with Dan Turpin, the second-in-command of the SCU. She was promoted to Inspector following the death-of-Superman storyline. Later, she was transferred from the Metropolis Police Department to the Gotham City Police Department to lead the Major Crimes Unit (MCU)

Maggie was introduced in Superman (2nd series) in April 1987, as Captain Sawyer of the Metropolis Special Crimes Unit, a special branch of the Metropolis police force that handles superpowered menaces when Superman is unavailable. Maggie mostly replaced Inspector Henderson from the previous comics as Superman's main police contact. She was added to the Superman canon following the Crisis on Infinite Earths and the miniseries that rebooted the comics, The Man of Steel. She tries to prove the police force is more efficient than a vigilante in fighting crime and so becomes is a constant thorn in Superman's side during the early days of his career, even trying to apprehend him occasionally. Eventually, after being injured and saved by Superman during a terrorist plot, her attitude towards him warmed up.

Maggie appeared at a charity ball attended by Katherine "Kate" Kane. While the two are dancing, Maggie mentions that she and Toby are no longer together and asks Kate for her phone number. Sawyer also appears as a supporting character in the new Batwoman series. She has begun dating Kate Kane, whose secret activities as Batwoman complicate their relationship. Kane reveals her identity as Batwoman by proposing to her in costume.

Other faces of Maggie Sawyer 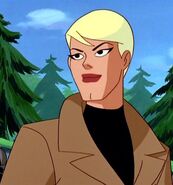 Joanna Cassidy as the voice of Maggie Sawyer in Superman: The Animated Series and Justice League.

Kryptonsite: Can you talk about the DC Comics character who appears in "Insurgence" (Maggie Sawyer) and if she differs at all from her comic book counterpart?
Jeph Loeb (writer, Insurgence): Maggie's appearance is more like what I get to do as "Consulting Producer." As we were breaking the story (where the writers all get together to build the outline) we knew we needed a strong female Metropolis Police Lieutenant and I suggested we call her "Maggie Sawyer" as a shout out to the fans. Ken Biller, who co-wrote the episode with me (he wrote "Lineage" with Al and Miles) agreed and we made her Maggie. It's a small role, but who knows -- given her eventual place in the mythos anything can happen. It's a smile.
Source: Kryptonsite interview [1]