"This has got Lucy written all over it with backstabbing bitch-berry lip gloss." - Lois Lane, Ambush

Lucy Lane is the younger sister of Lois Lane.

In her first appearance in Lucy, she was beautiful, and her demeanor was calm and apparently polite. She has green eyes and is a brunette. In her in latest appearance in Ambush, she is grown up, and gained more beauty over time.

Lucy is characterized as being highly intelligent but in a manipulative kind of way. A femme fatale character, she is able to make herself appear vulnerable and in need of protection while in fact she is completely independent. She speaks three foreign languages fluently (German, Mandarin, and Spanish), is a straight-A student, and plays classical violin. She is also a very good skier. During her first appearance, she seems to reveal an attraction to Clark Kent, much to his delight and Lois' slight annoyance.

It is implied that Lucy had a much easier childhood than Lois because her father did not put as much pressure on Lucy as he did Lois. Also, Lucy never had to worry about being responsible for anything because she knew Lois would always cover for her.

Lucy has an extremely manipulative personality, and constantly lies and cheats to get what she wants. She is selfish and does not care about how her actions hurt other people. Despite the Kents' hospitality to both her and her sister, she felt no remorse at attempting to steal from them. She also knew exactly what to say to Clark to deceive him into asking Lex Luthor for the money. Lois played a big part in raising Lucy after their mother died, but Lucy simply told her to stop trying to be her mother and revealed that she was always jealous of Lois for being able to spend so much time with their father. It is apparent that Lucy is used to getting her big sister to clean up her messes, with little gratitude or appreciation. With all these traits, she could best be described as a sociopath.

Lucy has also demonstrated no qualms about instigating petty drama. When she visited Clark and Lois for Thanksgiving along with the General (their father), she intentionally kissed Clark, in the hopes of either stealing Clark from Lois or at least instigating a fight between them. However, Lois knew her sister's tactics and did not fall for it. Lucy's willingness to do this, further displays her sadistic and shallow personality.

Lucy and Lois' relationship seemingly bears some similarities to the one between Lex and his younger brother.

Lucy was shipped off to boarding school in Switzerland by her father General Lane. While overseas, Lucy met the Swiss criminal and loan shark Marcus Becker. They thought up a plan to extort money from Lex Luthor.

Lucy showed up in Smallville with a story about how she had got in with the wrong crowd, ran up her credit cards, and now owed a loan shark $50,000.

After Clark went to Lex for help, Lex seized the opportunity to apprehend Becker, who happened to be an old business acquaintance. But while exchanging the money, Becker pistol-whipped Lex and kidnapped Lois and (seemingly) Lucy as well, holding them all hostage in the back of an 18-wheeler.

However, Lois and Clark realized at the same time that Lucy was using them all. Unknown to everyone, Clark intercepted the truck and was able to use his powers to incapacitate and apprehend Becker.

In the confusion, Lucy got away with Lex's money and went into hiding.

Lucy left an apology note to Lois in Lex's car.

Lo,
The General always said, "If you want inner peace, prepare for mental war." Well, my emotional troops are about to give up the fight, so I'm off to search for the lesson to be learned from all of this on my own. I hope you can forgive me.

I do love you. And I am sorry.
Lucy

Lucy's reference to "the General" refers to Lucy and Lois' father General Sam Lane. As military brats, Lucy and Lois often used military metaphors (e.g. "prepare for mental war", "my emotional troops are about to give up the fight") when they talked about their family.

When Lois was under the influence of gemstone kryptonite, she called Lucy to tell her she is getting married. Lucy can be heard screaming in joy through the phone. Although Lucy is not mentioned by name, Lois refers to her when she says, "Okay I have breaking news, sis."

Lucy and General Lane came to visit Lois and Clark at the Kent Farm for Thanksgiving. However, Lucy wanted to test Clark's loyalty to Lois and kissed him in time to be caught by her sister, intending to cause tension between the couple. Lois was not amused and knew perfectly well that Lucy had instigated this.

Lucy, in the hopes of winning favor with her father, Sam, agreed to help a disguised Rick Flag expose Clark as an ally with the vigilantes. Flag gave her an envelope of photos, which showed Clark's meeting with Kara, and also planted a homing device on Sam, supposedly to keep him safe. In truth however, Rick Flag, wanting the Vigilante Registration Act to fail, had planted the photos to turn the General against Clark, and to draw him away from the Kent farm, so as to kill him.

At the Talon apartment, Lois pleaded with the General to accept her relationship with Clark, to which both the General and Lucy attempted to claim their actions were solely out of their desire to protect her. Lois refused this, and tearfully told them that if they loved her, they would respect her choice to be with Clark. Realizing that Lois was right, Lucy and the General departed, moments before the missile aimed for the General nearly killed Lois. The Talon was destroyed, but Clark rescued Lois, gaining the respect of both Lucy and the General. Meanwhile, Lucy came to admit that she didn't mean to hurt her sister. Although Lois didn't fully trust Lucy, she seemed to accept her sister's apology and the two finally began coming to terms with their issues.

After Lois became a reporter for the Daily Planet, Lucy became a flight attendant and air traffic controller. She was Lois' Maid of Honor when her sister married Clark. Lucy has often been romantically linked to Jimmy Olsen until the mid 90's when she started dating Daily Planet reporter Ron Troupe, and the two had a son (Samuel Troupe) and married.

After a long disappearance from the principal storylines, Lucy Lane returns in the one shot Superman: New Krypton. Her past with Ron Troupe is not referenced (despite Troupe having resurfaced in the current storylines, working again with the Daily Planet). Whether Lucy's marriage to Ron Troupe, or the birth of their child Samuel Troupe, are still in continuity, or were erased by the time-altering effects of the Infinite Crisis are still unknown.

Her long disappearance is explained by her joining the military, in a desperate, post-mortem attempt to appease her (presumed) dead father's desire to have a son able to carry on his career in the military. Bitter and angrier than in her former appearances, she blames Lois for General Sam Lane's death during the war against Imperiex. Essentially, she thinks Lois broke his heart by putting her love for Superman before her duties as a daughter.

Lucy references her former appearances, even mentioning her dating boys in Lois' circle as failed attempts to live her life through her more successful sister, but she eventually chooses to sacrifice her life and live the military career her father intended for Lois, driving an even deeper wedge between the two sisters. However their father is still alive, and working with the government secretly.

In Supergirl, she is unmasked by Kara and revealed to be the evil Superwoman who had been battling against Supergirl she gained the appearance of Kryptonian powers via a powered up costume. Lucy seemed to have died in battle against Supergirl. Lucy was brought back to life in Supergirl Annual #1 due to the magical energies of her Suprwoman suit. She was found by her father in Supergirl #50.

Sam's feelings towards his daughter were unclear as part of him was pleased to know Lucy was alive, but he was also disgusted by the fact that Lucy had essentially become 100% Kryptonian as a result of her battle with Supergirl. When General Lane orchestrated the utter destruction of New Krypton, it provoked a war between the Kyrptonian survivors and Earth. Lucy and General Lane were confronted by Supergirl and Lois Lane. Rather than admit to his crimes as a genocidal maniac, Sam Lane killed himself, leaving Lucy swearing vengeance against all Kryptonians and her sister.

In the New 52 Lucy is first seen in Superman, where she was picked up from the train station by Lois after Clark Kent was unable to fulfill his promise to Lois to do it himself. Later to make up for it Clark accompanies her, Lois, Johnathan Carrol, and Morgan Edge to the most expensive restaurant in town but is later forced to leave her with the check due to his duties as Superman. Clark later makes it up to her by taking her bungee jumping, an activity which Lucy is partial to.

In a flashback, showing young Lois and Lucy living on a military base and playing, it is revealed that the two sisters have created a secret code, a language that only them can understand and speak. Lucy seems to be the riskiest, trying to climb on a tree, relying on Lois t catch her if she falls. Lucy also calls Lois "Lola".

In the present, a scared Lucy runs into her sister's place after men broke into her apartment and kidnapped her roommate. Lucy uses their secret code, which they haven't used for a very long time, and tells her that she "fell" again. Lucy's roommate Amanda was in pain, ill, and took some drugs by a physician named Osterman, which helped with Amanda's pain but had the unwanted effect of having her mutate into a monstrous creature. A group called the Cartel, were the men who broke into Lucy's place and for some reason they tried to take her too. Lois begins to investigate and finds out that The Cartel wants to help and cure those exposed to the mutagen. It turns out the drug hit the streets when some thugs broke into Dr. Osterman's lab and put it on the streets. The Agent, leader of the Cartel says there is no cure except detox and most of the people die during detox, or die trying to hold onto their new monstrous form. Lois decides that this solution of imprisonment isn't right either. She breaks out of her cell and frees all the prisoners. Lois finds Lucy's roommate Amanda and leaves on a giant bug creature, presumably being another transformed drug addict. The giant bug turns out to be Lucy who dabbled in the drug as well. Lois once again stays by Lucy's side to "catch her from her fall".

Other faces of Lucy Lane 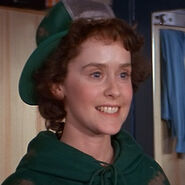 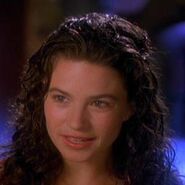 Elizabeth Barondes as Lucy Lane in Lois & Clark: The New Adventures of Superman. 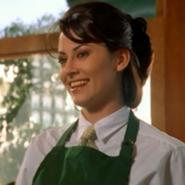 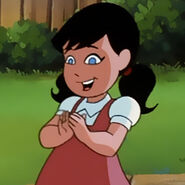 Aria Noelle Curzon as the voice of Lucy Lane in Superman: The Animated Series. 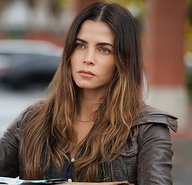