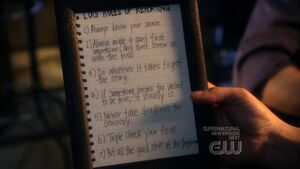 Lois Lane's Rules of Reporting were written for Clark Kent when he started at the Daily Planet. Clark later framed it and kept it in his desk drawer.

1) Always know your source.
2) Always make a good first impression (and don't screw up with the boss).
3) Do whatever it takes to get the story.
4) If something seems too weird to be true, it usually is.
5) Never take deadlines too seriously.
6) Triple check your facts.
7) Put all the good stuff at the beggining. [sic]

Lois frequently broke her own Rules of Reporting. The following is a partial list of the times she's broken her own rules: