Lillian Luthor (1951-1993) was the mother of Alexander and Julian Luthor, as well as wife of Lionel Luthor.

After dying, Lillian became a spirit.

Lillian came from a wealthy family. How she met Lionel is unclear, but they were married sometime before the 1980s. By all accounts, Lillian was a caring, beautiful and sophisticated person, as well as comments made by Lex and Lionel have indicated that she had a spirited personality, had ambitions of her own and stood up to Lionel.

Eventually, Lillian began to wonder about the special projects that Lionel had. She searched for answers and found something called "Veritas." However, Alexander saw her going through his father's briefcase, as well as Lillian asked him not to tell anyone. When Lionel found out, he immediately blamed Alexander and forced him to tell the truth. When Alexander did, Lillian insisted Lionel explain what Veritas was, but Lionel knocked her to the floor instead and warned her not to look into his projects again. Lillian felt angered and disgusted by Alexander's betrayal.

Sometime later, Lillian became ill with a heart condition that worsened over the rest of her life. Lionel hired a nurse named Rachel Dunleavy to assist her. Rachel and Lionel subsequently had an affair, resulting in the birth of Lionel's illegitimate son, Lucas. It is unclear whether Lillian knew of the affair or the child.

Lillian was helped by a nanny, Pamela Jenkins whom Alexander regarded as a second mother. Lionel was often absent from home and Lillian insisted that he take Alexander on one of his business trips, to Smallville during the meteor shower of 1989. Lionel's resulting shame and constant critique of Alexander bothered Lillian greatly.

Sometime in the early 1990s, Lionel insisted that they have another child, an idea that Lillian was highly opposed to, presumably because of her poor health. However, when Alexander was 11, Lillian became pregnant again. She insisted that Alexander be allowed to come home for school from Excelsior Academy and Lionel complied. Her pregnancy was strenuous and Lillian was bedridden for much of it. On Alexander's disastrous 12th birthday (which no one attended), Lillian gave him a lead box allegedly made from the armor of St. George, which he kept into adulthood and later gave to Clark Kent.

After baby Julian's birth, Lillian descended into a deep case of postpartum depression, refusing to hold the child and crying perpetually. One evening, Lionel sent the baby's nanny home and insisted that Lillian bond with the child. Lillian expressed her concern that Lionel would pit the two boys against each other and announced that she wanted a divorce, a threat that she apparently made many times and that Lionel called "tiresome."

On returning home from work one night, Lionel discovered Alexander in the baby's nursery. Alexander immediately apologized and confessed to accidentally killing Julian while trying to stop him from crying. Lionel erupted into a fierce rage, as well as struck Alexander. Their relationship never recovered, even after he became an adult. It was not until years later, after receiving experimental therapy to recall repressed memories, that he remembered that Lillian had in fact smothered the baby during one of her delusions, hoping to spare him from Lionel's maltreatment. Alexander took the blame, correctly assuming that his father would cover it up in order to protect his sole heir, although he would probably be less inclined to do so for his wife.

Sometime before her death, Lillian along with Lex and Lionel went to a ranch in Montana to spend time together. During that time, a snake spooked Lillian's horse, prompting Lionel to save her and waiting on her until she was better.[1]

After Julian's death, Lillian was diagnosed with terminal cancer [2] and her health began to rapidly deteriorate, eventually leading to her passing away in the spring of 1993 when Alexander was 13. He later confessed to Clark that he was in denial about her impending death and spent the time researching treatments and doctors, instead of being with her. Lex also told Lana Lang that he was away at boarding school when Lillian died and found out about her passing from reporters who had sneaked into his school.

Lillian left her shares of LuthorCorp to her son and Pamela.

Lillian's death has been extremely influential in adult Lex's life. He has had visions of his mother on many occasions. When Lex was shot and ended up in a coma, he had a near-death experience. In it, Lillian visited him and showed Lex an alternate life of happiness that he could have if he walked away from Lionel and LuthorCorp. However, in the end of the vision, Lana (his dream wife) suffered complications during childbirth. Because of Lex's lack of resources and estrangement from his father, he was unable to transfer Lana to a better facility and she died: this led Lex to believe that Lana died because he lacked enough money and power: with these, everything else in life could be secured. As a result, Lex ignored his mother's warning and continued his lifestyle of deceit and corruption. After realizing this, Lillian is seen in the reflection of a hospital window crying over her sons choice.

When Lex was injected with the Limbo drug, which placed its users in a state of "clinical death," he met Lillian again, who told him that she was angry with him for ignoring her advice.

When Lex was shot and went into a coma, Clark Kent and Lionel used a machine that allowed Clark to enter Lex's mind in order to find Lois Lane and Kara Kent. In Lex's mind, Clark met a young version of Lex and the two hid from a psychotic and murderous adult Lex. In the memory featuring Lillian snooping in Lionel's briefcase, Clark witnessed Lionel's verbal and physical abuse of both Lex and Lillian, as well as watched Lex try to help his mother up, but Lillian uncharacteristically told him he'd done enough and walked away from him.

Although Lillian has appeared in very few episodes, Lex and Lionel often refer to her, giving the audience further glimpses into her character.

Other face(s) of Lillian Luthor 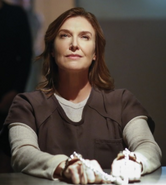 Lillian briefly appears in the comics, as the wife of Lionel and the mother of Lex and Lena Luthor. Pre-Crisis on Infinite Earths she is named Arlene, her husband was the one who disowned their son Lex, because his actions brought shame to the family and they changed their last name to "Thorul". Both she and her husband later die in a car accident. She has also been referred to as Letitia Luthor but in most of the storylines she appears she remains unnamed. The name "Lillian" is used for her for the first time in Smallville, like the name "Lionel" is used for Lex's father.