Smallville Wiki
Register
Don't have an account?
Sign In
Advertisement
in: Wikilink templates, Season 10 characters, Characters in the comics,
and 5 more

Leonard Snart is a member of Toyman's Marionette Ventures team. He is assigned by Toyman to kill Impulse. He goes by the codename: Captain Cold

Leonard Snart is a squat, pale man with light hair and large teeth and a rough shaven face. He wears dark blue goggles that resembles Inuit Sunglasses at all times. His Captain Cold costume is consists of a clear blue parka and slightly darker blue pants. His hood and cuffs are lined with fur and his shoulders are adorned with a matching white snow motif. He wears a yellow belt with pouches and white snow boots.

He is sitting around the Marionette Ventures meeting that is being lead by Toyman along with fellow members John Corben, Vordigan, Solomon Grundy, Roulette and Black Manta. When they all are given list of Clark's friends to take out Cold is assigned Bart Allen.

Captain Cold, also known as Leonard Snart is a criminal mastermind, albeit with a moral code, as well as major enemy of the Flash Family. Growing up in an abusive home with his sister Lisa (AKA Golden Glider), the pair would eventually both become criminals and also bounty hunters, though constantly retaining a familiar love and connection with each other.

Leonard was the first, starting out a small time hood and thief, but eventually gaining a freeze gun and elaborate costume, thus taking on the identity of Captain Cold. During his early years, Cold had no particular issue against the Flash and to this day, his beef with him seems to lack any real personalization. In truth, he seems to see the Flash and all super-heroes only as an obstacle to be overcome. He knows that they will eventually stand his in way and thus must use various means to make certain they do not interfere with his criminal plans.

As time progressed, Captain Cold became the unofficial leader of the group known as the Flash Rogues. Like many criminal groups, they work together to commit their crimes, but unlike groups like the Legion of Doom, they have morality and rules. These are all due to Cold's demands and he created them, the first rule is not to kill unless absolutely necessary.

Captain Cold and his fellow Rogues seem to hold a sense of respect for their enemies. For example, when the wife of Elongated Man, Sue Dibney was murdered, Cold ordered that the Rogues would NOT commit any crimes for a period and instead had flowers sent to Elongated Man, giving their honest and true condolences for his loss.

Captain Cold and the Rogues however have intentionally broken their no-kill rule once, after doing it unintentionally once before. While fighting against Bart Allen, who had grown up into an adult and become the Flash, he and the other Rogues lost their heads and killed him. Horrified by what they had done and infuriated by their "ringleader", Inertia's, lack of remorse they sought him out and murdered him. They then deposited his body at a police station with a note saying "Tell the Flash, we're even."

In this timeline of The New 52, Captain Cold is reintroduced as a younger man than in the previous timeline. His origin remains the same, however, his sister Lisa has not been the Golden Glider and is instead dying of cancer. Upon learning that the hospital does not have enough energy to power a laser that could save her life, because of an EMP seemingly caused by the Flash, Cold blames him for everything that has happened to him, including a falling out with the Rogues and decides to break the rules of their "game" and kill the Flash. Captain Cold has undergone experiments that have given him ice-based metahuman powers, including the ability to slow down the molecules around him, creating a field of inertia that reduces the Flash's speed to human level, allowing Captain Cold to touch him and effortlessly beat him. He and the Rogues are set to return.

Other faces of Captain Cold 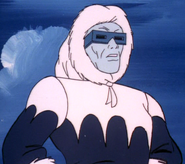 Dick Ryal and Michael Bell as the voice of Captain Cold in Super Friends. 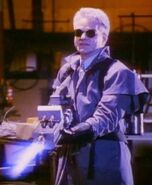 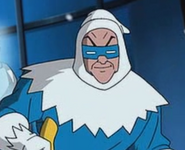 Michael Gough as the voice of Captain Cold in Superman/Batman: Public Enemies.

John Di Maggio as the voice of Captain Cold in Batman: The Brave and the Bold.

Alan Tudyk as the voice of Captain Cold in Young Justice.

Jens Anderson as the voice of Captain Cold in DC Universe Online.

Kevin Michael Richardson as the voice of Captain Cold in the DC Nation:Animal Man short. 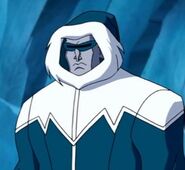 Corey Burton as the voice of Captain Cold in JLA Adventures: Trapped in Time. 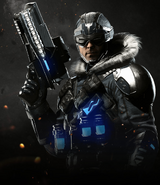 C. Thomas Howell as the voice of Captain Cold in Injustice 2.