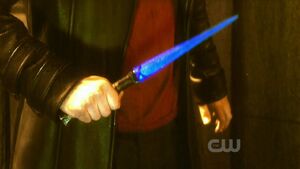 A kryptonite knife is an implement made out of some form of kryptonite.

As a knife, it has a lead cover and its mounted by some form of kryptonite like green or blue. As a sword, kryptonite can be laced into the metal of the sword.

These weapons, because they are laced with or covered in kryptonite, prove fatal to Kryptonians. Lead covers can shield its effects.

In an alternate timeline, Zod, bearing his birthright, wielding Kryptonian powers and abilities, through a red sun, easily overpowered Clark and stabbed him with a green kryptonite blade. But before he died, the twin solar towers were deactivated by a virus created by Chloe Sullivan, which restored Clark's abilities. He healed, and sent Lois back to her time.

It is later learned that Chloe had been stockpiling various types of kryptonite weapons, in the event that the Kandorians got their Kryptonian abilities and as insurance for safety. Oliver Queen found out but on Chloe's request, kept it from Clark. Seeing no other way to defeat and vanquish Zod, Clark allowed Zod to stab him with a blue kryptonite blade, falling off the roof of the crow's nest. Because Zod was apart from the blue kryptonite, he was transported to the new world when the Book of Rao was activated.

After Clark defeated Zod by allowing the rogue Kryptonian to impale him in the gut with a blue kryptonite dagger, he fell several stories and hit the ground, lying there with the dagger still logged in him, making him unresponsive, almost lifelessly. Lois eventually removes it and tosses it aside, she moves away from his body, and Clark heals instantly before speeding off.

Retrieved from "https://smallville.fandom.com/wiki/Kryptonite_knife?oldid=310180"
Community content is available under CC-BY-SA unless otherwise noted.