Dr. King Faraday was an agent for the government organization known as Checkmate.

Along with Checkmate he discovered an infant the White Martian, Megan Morse. She was kept for study inside a facility underneath Checkmate's headquarters and Faraday raised her as his own kin, due to seeing his own deceased daughter in the young Martian. After Zod's attack on Checkmate's castle, they stayed locked inside the facility with Faraday eventually dying of natural causes. Traumatized, the young Martian escaped and in a fit of rage started killing people she deemed as evil, until Batman and Detective John Jones tracked her down and gave her a new purpose to start over.

King Faraday was a middle-aged man with gray hair. His body shape appeared to be strong as he was an agent for Checkmate.

King Faraday seemed to have a very caring persoality. He was also a father figure for both his real daughter and M'gann. He "adopted" M'gann the moment she arrived on Earth, protected her and loved her like his own daughter, although this may possibly happened because M'gann took his actual daughter's appearance, who died sometime after M'gann's arrival.

After the crash of M'gann's ship in Colorado, near Checkmate's Headquarters, she was found by some of the organization's agents and kept captive in the facility. Some time after this, the daughter of her chief jailer, King Faraday, dies and M'gann, finding a picture of her, assumes her appearance in an attempt to console him.

King touched, begins to become attached to the little Martian and raised her as his own daughter, despite always in the limitations of her cell.

After Major Zod's attack to Checkmate, M'gann and Faraday were trapped inside the facility in the cell where the young Martian had lived since her arrival on Earth. Here the two stay together for months before the man died from hunger and, in a last sign of affection, recorded on his cellphone a message for whoever finds his corpse: take care of his daughter.

Again alone in the darkness, M'gann lives in desperation alongside to her surrogate father's deceased body.

In Checkmate's Headquarters the duo of Batman and Martian Manhunter found a rocket's launch project and discover that the White Martian was kept prisoner in it. While look around Jhon finds the body of an agent who remains locked inside the facility with the creature; as Batman note however, it seem that he died under natural circumstances and, before to did it, he recorded a message on his cellphone where he claims that his name is King Faraday and he begs the person which find his body to take care about his daughter.

He was named "King" by his father as a joke, a play on the phrase "King For A Day." An ex-soldier, King Faraday took a position as a counter-espionage agent for the U.S. government and engaged in a variety of standard spy-type capers. Faraday has since been incorporated full-bore into the DC Universe as a member of the Central Bureau of Intelligence. At one point, he was Nightshade's mentor. In fact, he had a hand in both her and Bronze Tiger being recruited into Task Force X. He has also teamed up with Batman a few times. On two of the occasions he has helped Batman in the capture of Two-Face.

One Year Later, he is a member of Checkmate, serving as the Bishop for White Queen Amanda Waller.

Faraday plays a prominent role in the alternate universe series DC: The New Frontier. He leads an effort to contain and corral the large amount of super-powered entities appearing. He uses various illegal methods, such as laying a trap for Barry Allen, even though he has not committed any crimes. Despite all this, he forms a friendship with the Martian Manhunter. He is killed in the last issue of the series while defending his friend from a psychic attack.

Other faces of King Faraday

Scott Patterson as the voice of King Faraday in Justice League. 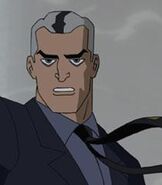 Phil Morris as the voice of King Faraday in Justice League: The New Frontier.

Clancy Brown as the voice of King Faraday in Young Justice.