Kilowog is a member of the Green Lantern Corps.

On the Moon, a group of Green Lanterns, including Kilowog, explain to Superman and John Stewart that there is no treaty between the Guardians and the Manhunters and one of them suggests that these Manhunters were rogue units that have gone mad without a purpose. Superman asks who created the yellow rings that powered the robots and the Lanterns explain that in order to battle the Manhunters, the Guardians took extreme measures. After this revelation Kilowog and the other Lanterns decide to return to their sectors and report to their post.

In space, a small group of Green Lanterns, including Kilowog, observe the battle on Earth. The Green Lanterns are not sure if they can fight Parallax because the last time they did it, most the members of the Corps were killed and Oa was almost destroyed. Salaak then plays John's message about the one thing that frightens Parallax, so they decide to find it and stop the fear entity once and for all.

When Parallax is about to attack Superman and the depowered John Stewart, the real help comes when the Green Lanterns arrive on the scene with the entity of willpower. Unfortunately with the yellow power rings getting reset the same happens with the green ones, leaving the Green Lanterns temporarily depowered as well. The two entities begin to battle and with an assist from Superman, they banish Parallax to its realm, which was his greatest fear.

In the aftermath, the Green Lanterns reevaluate their mission parameters and as their rings finish their reboot, they decide to choose their own destiny.

A towering alien with a brutish cross of porcine and bull-doggish appearance, Kilowog is renowned throughout the Green Lantern Corps as the primary trainer of the Corps' newest recruits. The Guardians of the Universe recruited Kilowog, a gifted genetic scientist, from the planet Bolovax Vik, located in Space Sector 674. Kilowog was trained by Lantern Ermey. In the middle of a particularly arduous training session, Ermey had Kilowog and his fellow rookies help stop an attack on a group of Lanterns, one of whom was the future renegade Sinestro. Ermey, fatally wounded in battle, commended Kilowog on his abilities, telling him that he had the makings of a great leader. In addition to serving with distinction as the Green Lantern of that sector, Kilowog also began to spend extensive periods of time on the Green Lantern Corps' home planet of Oa instructing new recruits on how to handle and best utilize their power rings. In this capacity, Kilowog acted as the first trainer to a young Hal Jordan, the ring-recruited successor to the slain Abin Sur of Ungara, the Green Lantern of Space Sector 2814.

During the Crisis on Infinite Earths, Bolovax Vik was destroyed. This was a powerful blow to the giant Green Lantern, as his race lived a highly communal lifestyle and to be alone was one of the worst things imaginable. Owing somehow to this genetic similarity to and affinity for each other that all Bolovax Vikians possessed, Kilowog was able to rescue the entire population of his homeworld by storing their collective life essences within his ring upon that world's annihilation.

Later, Kilowog relocated to Earth with his former pupil Jordan and the group of GLs that had decided to make their base there. They ultimately became the Green Lantern Corps of Earth. While his appearance at first frightened most humans, Kilowog briefly became a celebrity following his defeat of the villain Black Hand on live television in a battle over Anaheim Stadium. This goodwill was soon squandered, though, when he was approached by a KGB agent and invited to live in the Union of Soviet Socialist Republics, as the society of Bolovax Vik was somewhat similar to a communist system. During his time in the USSR, Kilowog was instrumental in the creation of the Soviet Union's first super-powered force, the Rocket Red Brigade. Kilowog ultimately became disenchanted with the U.S.S.R. and the flawed communist nations of Earth.

While adventuring with the Corps of Earth, Kilowog found a world in Space Sector 872 which would make a suitable "Bolovax Vik II". Moved to action, he tapped into his ring and reconstituted the entire population of his world, some 16 billion beings. No sooner had he done this, though, than the world was obliterated by the renegade Green Lantern Sinestro and all 16 billion Bolovax Vikians were permanently killed. The trauma of this drove Kilowog temporarily insane, but he was helped back to his senses by fellow Lantern Arisia, to whom he confessed his love. He was also supported by other Green Lanterns, who made an effort to be near him, as they knew Kilowog's race enjoyed being in crowds.

When the Corps began to expand again, Kilowog returned to Oa to train the new generation of Green Lanterns. During the Emerald Twilight arc, numerous Green Lanterns were sent to stop the supposedly insane Hal Jordan, with the very last Green Lantern to oppose Jordan being Kilowog himself, on Oa. He attempted to prevent his old pupil from entering and absorbing the power of the Great Battery itself, which destroyed the Corps. Kilowog was disintegrated with a blast by Jordan's ring, leaving nothing but a seared skull and ashes and a shaken but undeterred Jordan stole the energies of the Great Battery.

The enigmatic being known as Dark Lantern seemed strangely familiar to those closely acquainted with the legacy of the Green Lantern Corps when he first made his presence known on Earth. He was created by some of the remaining Green Lanterns who had lost their rings. They tapped into arcane forces and based on the unusual nature of the Bolovax Vik afterlife, they converted the soul of Kilowog into the Dark Lantern in order to send him after Jordan. Soon after this, though, his spirit was recalled to life by Kyle Rayner and Ganthet.

When the Guardians were reconstituted and reformed the Corps Kilowog retakes the role of Green Lantern drill sergeant, training new recruits (or "poozers" as he often refers to them) for the newest incarnation of the Green Lantern Corps.

During the Sinestro Corps War, Kilowog was on the front line during the battle of Mogo. When the conflict moved to Earth, Kilowog battled his Sinestro Corps counterpart, Arkillo. Kilowog defeated the villain and removed his ring. After the war's climax, Kilowog was seen on Mogo, eating dinner with energy constructs of his family members.

During the Blackest Night, Kilowog is attacked by the reanimated Ermey, who mercilessy berates him for not preventing his death and for saving the life of Sinestro, citing the deaths Sinestro had caused as being Kilowog's fault. He also torments Kilowog over the death of the current class of Green Lantern rookies, whom Ermey himself had just slain. Gaining the upper hand, Ermey attempts to rip out Kilowog's heart, but is interrupted by the announcement that Black Lanterns' rings have reached one hundred percent power. Kilowog then joined his fellow Green Lanterns in their attempt to protect the Central Power Battery. After the Black Lantern threat is defeated Kilowog decides he does not want to be the drill instructor anymore, just a regular Green Lantern. Kilowog arranges for the robotic Lantern Stel to take over his duties.

During the War of the Green Lanterns, Kilowog and Arissa accompany Guy Gardner on a mission to the 'unexplored sectors'. The three defeat a powerful telepath. They also avenge the death of several Lanterns, a concept Kilowog is becoming increasingly unable to process.

In the New 52, Kilowog is back to being drill instructor of the Green Lantern Corps and is part of the team that breaks John Stewart out of prison when the Alpha Lanterns sentence him to death. He and Salaak have also uncovered the Guardians' plans regarding the Third Army. Later when the Guardians attempt to lure their Green Lantern members to Oa under a fake inoculation treatment for the Third Army, Kilowog by then had secretly contacted trusted members within the corps and assembled them into a small army to face the Guardians. By having Guy Gardner serve as a distraction, Kilowog used the opportunity to seize control of the Central Power Battery and not only freed the Lantern members the Guardians immobilized, but also ended the communication blackout allowing him to warn the approaching members of the Guardians deceit.

Other faces of Kilowog 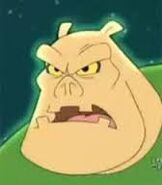 John DiMaggio as the voice of Kilowog in Duck Dodgers. 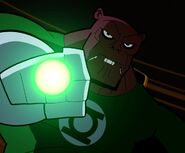 Diedrich Bader as the voice of Kilowog in Batman: The Brave and the Bold.

Michael Madsen as the voice of Kilowog in Green Lantern: First Flight.

Henry Rollins as the voice of Kilowog in Green Lantern: Emerald Knights. 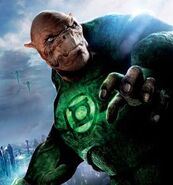 Michael Clarke Duncan as the voice of Kilowog in Green Lantern.

Kevin Michael Richardson as the voice of Kilowog in Green Lantern: The Animated Series.
Add a photo to this gallery
Retrieved from "https://smallville.fandom.com/wiki/Kilowog?oldid=294535"
Community content is available under CC-BY-SA unless otherwise noted.