Smallville Wiki
Register
Don't have an account?
Sign In
Advertisement
in: DC Universe characters, Characters in the comics, Smallville Comic characters,
and 2 more

View source
watch 02:07
Spider-Man: No Way Home Trailer Dropped - The Loop
Do you like this video?
Play Sound

John Constantine is an Exorcist, Demonologist, and occasional Master of the Dark Arts.

John Constantine is a tall, good-looking Caucasian man with sandy brown hair and brown eyes. He has a tattoo of a mystic symbol on the underside of each forearm. He typically dresses in a white button-up shirt, with a black tie, jeans with sneakers and a brown trench coat.

John possesses a somewhat sarcastic sense of humor that isn't to everyone's liking.

John gives off an air of being selfish and self-opinionated, but in reality, this is a cover to hide his guilt and sorrow due to the fact that everyone he has ever tried to get close to has died and is now haunting him as a ghost.

When Zatanna was attacked by a man, John interferes and knocked the man out. He then introduces himself and offers her a cigarette.

Zatanna and Constantine arrive at his place of business, which appears to be a black market for cursed items. He informs her that the Book of Magick she's looking for, which used to be in her father's possession, was stolen from him by a group of occultists just like the one they encountered, the Church of Blood. Zatanna says that the acolyte she fought with was already very powerful and John says that they must be planning something big. John also says that he wants the book because he intends to sell it to collectors but Zatanna says that the book belonged to her father, from which he got all his spells, so she won't let him have it. She reveals to him that she needs to find the Book of Magick and destroy it like she did with all the other items he had cursed. Constantine then says that she can't battle with all these men from the cult on her own and that she needs help to do so. The two form an uneasy partnership, even though they still disagree about who will take the book in the end.

Following an abduction of a teenage girl by the cult, Zatanna and John Constantine are closing in on the Church of Blood, who is preparing a final sacrifice at Stonehenge to bring the demon Trigon to Earth. They arrive moments before the cult appears ready to kill the girl. Just as Brother Blood, the leader, raises his ceremonial dagger, John and Zatanna descend from the sky. They succeed in preventing the girl's sacrifice while Constantine attacks the cult members but suddenly Brother Blood reveals that he was the true sacrifice all along and then stabs himself in the heart.

While demons claw their way out of Brother Blood's body, Constantine grabs the Book of Magick and makes off with it, abandoning Zatanna and the girl to deal with the demons on their own. With no other options, the two run from the attacking demons.

Constantine retreats to a nearby truck as Zatanna is left alone with the girl at Stonehenge to face the demons. The ghosts of those he's let die in the past watch him accusingly, but he insists he doesn't care about leaving her and the girl behind. Constantine eventually has a change of heart and hurries back to Brother Blood's body. He reaches inside the slain man's opened chest to extract one of his organs. Then he recites an exorcism spell that banishes the demons back to the pits of Hell from whence they came, saving both their lives.

Later, Zatanna meets Constantine at one of the bars and her thanks to him for not letting her die. She also tells him that she considers D.E.O.'s offer to become a consultant and John says that now that she doesn't have to search for any other cursed objects of her father's she is free to do what she wants. He then gives her back the Book of Magick, deciding not to sell it, and takes his leave through a closet.

When Constantine returns to his flat in London, two D.E.A. agents meet him at the door saying they'd like a word with him. Constantine promptly turns them into frogs and collects their badges in a bucket already containing quite a few other police badges.

John Constantine made his debut in comics in Swamp Thing (vol. 2) #37 (1985), where he was a supporting character who played a pivotal role in the American Gothic storyline. He received his own comic book, titled Hellblazer (also known as John Constantine, Hellblazer), originally published by DC Comics (1988) but it was made an official Vertigo Comics publication at the launch of DC's imprint (1993). Pop artist Sting served as visual inspiration for the character.

Due to the more realistic theme of the Hellblazer series, no mention was made of John's interactions with superheroes from the DC Universe, even though through the years the character had made several, mostly cameo, appearances in DC's titles. Constantine was one of the few people aware of the Crisis on Infinite Earths, and one of the few to have foreseen it.

A younger version of Constantine made his return in the DC Universe, in the crossover series titled, Brightest Day and the spin-off series, Brightest Day Aftermath: The Search for Swamp Thing (2011). Inspired by his appearances in those series, John Constantine was included in the New 52 universe after DC Comics' relaunch. He was added to the roster of the Justice League Dark series by writer Peter Milligan, who was also writing the Hellblazer series at the same time. Milligan explicitly stated that the continuity of the two series would be mutually exclusive and that there would now be a Vertigo John Constantine, and a younger DC Comics Constantine. The Hellblazer series concluded with issue 300 and was replaced by the DC's title, Constantine, starring the New 52 version of the character (2013).

In the New 52, John, as a younger man, had been learning all he could of the occult and magical in Europe when he decided to travel to New York City, and learn under one of the greatest mages in the world: Nick Necro, who had himself studied under the great Zatara and Baron Winters. Nick's girlfriend at the time was Zatara's daughter, Zatanna, who was herself a powerful magician. When John first laid eyes on her, he fell in love with her. The three of them studied together, battling occult threats like the Cult of the Cold Flame. Nick, however, soon became obsessed with the search for the fabled Books of Magic. His obsession drove Zatanna into John's arms, and by the time Nick realized it, he cared more about the Books. He was not, however, above revenge. He allied with the Cold Flame in order to send John to Hell, in exchange for help finding the Books of Magic. Thanks to John's wiles, though, it was Nick who was sent to Hell. John and Zatanna were together for a time after that until they were driven apart by the fact that John's occult activities resulted in her own father's burning to death before their eyes. It would be some time before they would see each other again.

Alerted by a magical shift in reality that had him falling from the sky in London, John began scrying in search of Zatanna, once again, as he believed she might be in trouble. He managed to track her down in the United States, but she was in a trance state, and he was forced to wake her up with backward magic. Afterward, she explained that the danger he sensed was the return of the Enchantress, who was causing havoc in search of her host, June Moone. John's first instinct, then, was to seek out Deadman, but he could not find him - and so, he went directly to Madame Xanadu, whom he had already come to understand was responsible for splitting June from the Enchantress, which would inevitably result in a magically tinged doom. Knowing that June was about to be consumed by the Enchantress, John appeared next to her and drew a protective circle around them both. He realized, then, that a rhyme that she had stuck in her head was part of the spell that Xanadu had used to separate her from the witch, and so he began reciting it himself in order to put them back together. Deadman attempted to stop him, having grown attached to June, but to no avail. Thanks to the efforts of both John and Mindwarp, the Enchantress' threat was nullified, and June was lost forever.

Afterward, John revealed that the entire ordeal had been Xanadu's fault, and the magicians all parted ways bitterly. However, Madame Xanadu's visions of a future of doom had not ceased, and would not cease unless the team she had alienated remained together.

Later, Steve Trevor recruits Constantine to track down Felix Faust. He lures Constantine in by showing him the Dreamstone of Doctor Destiny's and tells him that he will allow him into The Black Room for five minutes when the mission is completed. At first, he has trouble getting the group on board but he reveals to Zatanna that he saw her father's hat and stage outfit in the Black Room and he will retrieve them for her if she can get the group to go to the Amazon. They defeat Faust and retrieve the map to The Books of Magic.

Other faces of John Constantine 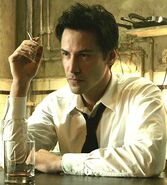 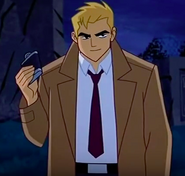 Damian O'Hare as the voice of John Constantine in Justice League: Action
Community content is available under CC-BY-SA unless otherwise noted.
Advertisement