Joe Chill is the murderer of Bruce Wayne's parents and an associate of Intergang.

Joe Chill is a criminal who murdered the parents of Bruce Wayne years ago and had been at large since.

He later moved to Metropolis to ally himself with Intergang and work to aid criminals around the world battle super powered vigilantes and super heroes.

On a night of crime fighting in Gotham, Batman and his partner Nightwing intercepted and quickly took down Gunrunner Saul and his group of thugs before the police arrived. Batman learned from Saul that his boss was Joe Chill. Determined to avenge his parents death, Batman sets out with Nightwing to Metropolis, where Joe is located.

Superman and Batman breaks into Stryker's Island Penitentiary to find out what Intergang boss Bruno Mannheim knows. Just then, in front of the Batwing, Mannheim falls from above before Superman catches him below. Mannheim spills the beans: Intergang wanted to protect themselves from the invasion, Mannheim decided against it but offered Joe Chill to help them. But now, Chill is off the grid, rumored to be in FBI custody.

Batman arrives on the rooftop source of the signal to find Superman waiting for him. Superman knows enough about the Batman that this is the specific way to call a meeting with him. Superman also knows Batman and Nightwing located Joe Chill's safe house in Suicide Slums. Superman doesn't want Batman tearing through Suicide Slums hell bent on revenge for Joe Chill so he proposes "a joint investigation mutually beneficial to both of us." They make sure Joe Chill is safe from Intergang and then find out who's manufacturing the weapons he's peddling and Batman agrees.Superman and Batman then scans the building and Batman's night vision goggles spot some extra snipers Superman missed when he bathed the building with X-rays. Batman then easily and stealthily penetrates the safe house and finds Joe Chill's room, though Superman beats him there with Super speed where they find an old and crippled Joe Chill.

At the safe house, Chill, a lifelong criminal, isn't exactly repentant about killing Batman's parents, whoever they were. Batman can't be specific and Chill has killed a lot of people for lots of reasons. This isn't good enough for Batman, who loses it, until Superman literally slaps him down. Superman calmly explains to Joe Chill that they're really here to find out where they can find a man named Loomis, who they believe is manufacturing the weapons Chill fenced for Intergang. But hey, they don't have to look very far because Loomis is already there! Batman and Superman spring into action with Heat Vision and Batarangs, but a burst of cold takes out both. Loomis isn't alone. He has help from Mr. Freeze.

Superman and Batman are fighting Prankster and Mr. Freeze. Batman reveals that Mr. Freeze is Victor Fries. Prankster reveals that he wants to prove himself to Intergang. While Superman tries to distract the villains, Batman and Joe Chill try to escape. Superman gets shot by Kryptonite bullets while Mr. Freeze kills Joe Chill and frames Batman for the crime. When Batman frees himself, he finds out that Chill is dead, and Superman is critically wounded. The FBI comes in to arrest Batman. Batman escapes with Superman within the Batmobile.

Joe "The Iceman" Chill is a fictional character in the DC Comics Batman series. In many versions of Batman's origin story he is a mugger who murders young Bruce Wayne(Bruce's age has varied, usually between six and ten years old)'s parents, thus making him indirectly responsible for Batman's existence. Not much is known about Chill except that he is, in most versions of Batman, a petty mugger who kills Bruce's parents Thomas and Martha while trying to take their money and jewelry; when he demands Martha's necklace, Thomas moves to protect his wife and Chill kills him; he then kills Martha when she screams for help (In most versions of the story, Chill declares "This'll shut you up!" before killing Martha; in the Golden Age version, Martha dies from the shock of seeing her husband shot and murdered). Chill panics and runs away when Bruce begins crying and calling for help — but not before the boy memorizes his features. In at least three versions of the Batman mythos, Chill is never identified.

Over the period when Bruce Wayne left Gotham, traveling the world, Chill built up a small criminal empire with a front which includes a legitimate business. He became a man of consequence. Batman's origin story is first established in a sequence of panels in Detective Comics #33 (November 1939) that is later reproduced in the comic book Batman #1 (Spring 1940), but the mugger is not given a name until Batman #47 (June–July 1948). In that issue, Batman discovers that Joe Chill, the small-time crime boss he is investigating, is none other than the man who killed his parents. Batman confronts him with the knowledge that Chill killed Thomas and Martha Wayne. Chill, believing there is no way Batman could know this, accuses him of bluffing, but Batman reveals his secret identity as Bruce Wayne, who witnessed the murder firsthand. Terrified, Chill flees and seeks protection from his henchmen, but once they learn that Chill's actions led to the hated Batman's existence, they turn on their boss and gun him down before realizing how priceless his knowledge of Batman's true identity is. Before a dying Chill has a chance to reveal Batman's identity, the Dark Knight intervenes and apprehends the goons; Chill dies in Batman's arms, addressing him by his true name. In Detective Comics #235 (1956), Batman learns that Chill was not a mere robber, but actually a hitman who murdered the Waynes on orders from a Mafia boss named Lew Moxon.In the 1980 miniseries The Untold Legend of the Batman, Alfred Pennyworth reminisces that Joe Chill is the son of one Alice Chilton, Bruce Wayne's one-time nanny.

In the 2008 Grant Morrison story "Joe Chill in Hell" (featured in Batman #673), Chill is reinterpreted as a mid-level crime boss who builds the Land, Sea, Air Transport company from the ground up (most likely through illegal means).Chill murders Thomas and Martha Wayne and adding for the first time that he is later arrested on that same night for their murder. However he is released because he blames his crimes, including murdering the Waynes, on class warfare. In this story,One of the first things Bruce did upon becoming the Batman was to torment Chill for weeks. Paranoid, hiring guards and living in his office, Chill lived on tenterhooks, until the night the Batman came for him. However, instead of killing him, as Chill had expected, he handed Chill the handgun with which he had killed the Waynes all those years ago. The horror of the realization that the Batman was that boy, and what his criminal associates would do to him when they found this out, drove him to take his own life.

Following the timeline reboot in Flashpoint, Bruce Wayne still mentions Joe Chill having murdered his parents,but was never caught. Following their deaths, he spent months as a young boy investigating some possible connection to the Court of Owls.[1] A young Bruce Wayne looks for the man who killed the Waynes, but does not succeed. Many years later, when he is eighteen years old, he manages to find him, and holds him at gunpoint asking him who hired him. Chill responds that he didn't know who they were until the next morning, that he just wanted the pearls, but Bruce refuses to believe his parents were killed for nothing. Bruce then prepares himself to shoot him, but then realizes that his father would not have wanted that, so he leaves.

Other faces of Joe Chill 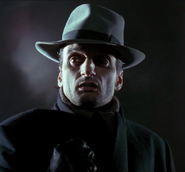 Kevin Conroy as the voice of Joe Chill in Justice League Unlimited. 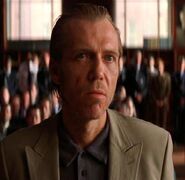 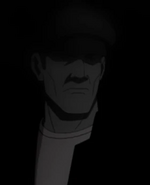 Joe Chill in Batman: Year One 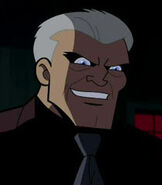 Peter Onorati as the voice of Joe Chill in Batman: The Brave and the Bold.

Damon Caro as Joe Chill in Batman vs. Superman: Dawn of Justice (2016) 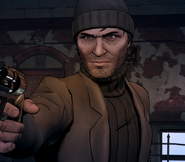 Glenn Wrage as the voice of Joe Chill in Batman: Arkham VR (2018) 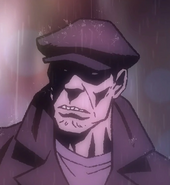