Smallville Wiki
Register
Don't have an account?
Sign In
Advertisement
in: Recurring characters, Season 9 characters, Characters in the comics,
and 6 more

Joar Mahkent was a supervillain known as The Icicle, a former adversary to the Justice Society of America. He was responsible for the death of Hawkgirl and ultimately led to the downfall of the JSA. He was put into a catatonic state by Carter Hall AKA "Hawkman" who sought revenge.

He had the same powers as his son.

Joar Mahkent was a hitman, who used cryonics to murder his victims (earning him the nickname "the Icicle"). Joar had several encounters with the JSA over the years. Their final encounter left Joar severely wounded after he killed Hawkgirl.

This sent Hawkgirl's husband, Hawkman AKA Carter Hall over the edge and into a state of grief while also fueled by rage and the strong need to exact revenge, Hawkman viciously attacked Joar, leaving Joar in a catatonic state. Some time before this, Joar married an unknown woman, who gave birth to Joar's son, Cameron Mahkent.

Joar spent the rest of his life after this in a coma and on life-support in the Metropolis General Hospital. His son Cameron came and visited him regularly and told him of his plans to get revenge on the JSA for taking away the only family he had left.

After killing Dr. Fate and stealing his helmet, Cameron killed him by unplugging his life support systems.

Dr. Joar Mahkent arrived in America with his latest scientific discovery, spectators at dockside were astonished to witness the luxury liner upon which Mahkent was traveling suddenly frozen solid in Gotham Harbor.

Investigating this phenomenon, the original Green Lantern (Alan Scott) was shocked by the sight of Dr. Mahkent shot dead in his stateroom, apparently the victim of Lanky Leeds, a notorious racketeer who was reportedly traveling on the same ship. Thus, when the bizarrely costumed criminal known as the Icicle appeared upon the scene later that same day, wielding a unique weapon capable of instantly freezing solid any moisture in the air, Green Lantern presumed he was actually Lanky Leeds, who had stolen Dr. Mahkent's invention.

Green Lantern ultimately unmasked the Icicle as Joar Mahkent himself, who had, in fact, murdered Lanky Leeds, using his cold ray gun to temporarily disguise Leed's face as his own.

The Icicle met his death during the Crisis on Infinite Earths, when he and several other super-villains attempted to invade the laboratory of the renegade Oan known as Krona.

Other faces of Joar Mahkent 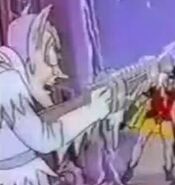 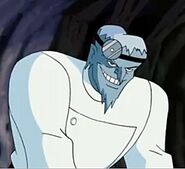 Corey Burton as the voice of Dr. Blizzard (a character created as a homage to Icicle) in Justice League. 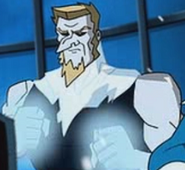 Michael Gough as the voice of Icicle in Superman/Batman: Public Enemies. 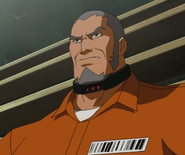 James Remar as the voice of Icicle Sr. in Young Justice.