Jesse Hutch is a Canadian actor. He was born on February 12, 1981, in Alberta, as Jesse James Hutchakowski.

Jesse grew up in Canada and worked for four years as a water raft guide before started his career as an actor.

Jesse Hutch is also known from recurring appearances in other TV series, among others

and starred in various TV filmes. 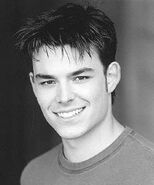 Retrieved from "https://smallville.fandom.com/wiki/Jesse_Hutch?oldid=318768"
Community content is available under CC-BY-SA unless otherwise noted.