Smallville Wiki
Register
Don't have an account?
Sign In
Advertisement
in: Season 8 characters, Aliens, Characters in the comics,
and 9 more
English

Member of the Legion

Alive (in the 31st century)

"Lana, you're part of the reason Kal-El becomes the hero. " - Imra to Lana Lang, Legion

Imra Ardeen is a member of the Legion of Super-Heroes from the 31st century under the name Saturn Girl.

She and two other members returned to the past to help Clark stop Brainiac.

Imra is an alien with a human appearance from an unknown planet. She has medium-length blonde hair, blue eyes, and is of medium height. When she appeared in Legion, She was only seen wearing her signature colors of red, white and yellow.

In the episode, she was seen wearing her Legion outfit, which consists of a red leather jacket with a white shirt underneath that bears a yellow colored logo of the planet Saturn, red heels and a pair of red jeans. She also wears her Legion ring which gives her the power of Flight and time travel. It never leaves her finger.

Due to her telepathic abilities, Imra is the most empathic and understanding member of the Legion founders. She behaves as the voice of reason for almost all situations, particularly when it comes to Rokk and Garth, who have been her oldest friends. She seems to understand the actions and motives of people, and can often get them to talk about things and feelings that they normally wouldn't open up about to a stranger. She does seems to lack some personal space issues, however, as she has no issue reading the minds of those around her, despite the obvious discomfort it causes others.

"Your sadism's historic where I come from. But so is your defeat." - Imra, to Brainiac, Legion

Along with fellow founding Legion members Rokk Krinn and Garth Ranzz, Imra traveled through time back to the 21st century to stop the Persuader from killing Superman aka Clark Kent. They found him to be at Clark's barn where he had just returned from seeing Jimmy off to Star City. After he had cut open his abdomen, Rokk took away his Atomic Axe using his ability of magnetism control and Imra distracted him using telepathy enough so that Garth could knock him out using his electricity before Rokk took away his stolen Legion ring sending him back to the 31st century.

Rokk, Garth and Imra then introduced themselves to Clark as the Legion of Super-Heroes. The three explained to Clark what he is truly destined to be, which is a model for all of the galaxy for aliens to come to Earth and live among humans. The three Legion members decided to help Clark defeat Brainiac, even if it had to kill its human host: Chloe Sullivan, although he refused their help. Imra went to see Lana Lang, to have her convince Clark to sacrifice Chloe to destroy Brainiac. The Legion attacked Brainiac, managing to subdue it while they tried to find a way to kill it. Working together with Clark, finally, Imra helped Clark connect with Chloe from within and held her down as Garth and Rokk used their powers to extract the particles of Brainiac.

As Lana was tempted to ask of her future, Imra only told her that she has a destiny to fulfill as well and that "her secret" would be safe with her. Imra, Rokk, and Garth had later returned to the future with what was left of Brainiac saying that they would reprogram it to be more productive, naming it 'Brainiac 5'. Imra voiced her hope that the new Brainiac would be "a little more friendly".

During the 31st century war between EarthGov and New Krypton, Rokk and Imra infiltrate the colony and encounter EarthGov agents attempting to commit a bombing attack on the New Krypton world-ship. They manage to disarm them but draw the attention of elite security who believe they were part of the terrorist attempt. As they are about to be taken to New Krypton's judgment council, Clark and his cousin Kara Zor-El arrive on the scene defending them.

High above Earth, Imra, while holding Kirt Niedrigh's agents captive, contacts Brainiac 5 and informs him that Superman arranged their release but she is worried about the war procedures escalating. She also states that if they are not able to maintain peace, they might have to call every Legionnaire from all corners of space to hold the solar system together. She asks Brainiac 5 to activate "Legion Protocol Six".

Because of Protocol 6 the Legion gathers all its members so they can stop the upcoming war.

In outer space, Superman and Supergirl meet the Legion. They inform the cousins that the Kryptonians have launched an incoming gravity bomb at Earth in response to the attack by Doomsday on New Krypton. Kara calls all the Legion members to follow her to Earth, except from Saturn Girl, who follows Clark on New Krypton.

On New Krypton, Superman and Saturn Girl find Doomsday, the hulking brute having almost killed off the Eradicators and caused mass panic in the city. Clark asks Imra to make a link with the minds of all the Kryptonians. Clark then informs them about who he is and Doomsday's origin. He also encourages them to help him defeat the beast. Unfortunately, Clark and the other Kryptonians' efforts are not enough to stop Doomsday so Clark decides to take the monster and throw it to the sun.

Deep in space Superman engages Doomsday flying him directly into the Sun while telepathically communicating with Saturn Girl, whom he tells her certain instructions as he doesn't believe he'll make it out alive. He tells her to tell Lois, make sure that both Booster and Kara find a place in the 31st century.

Saturn Girl tells Superman it doesn't have to be this way, Using the full blast of his Heat vision Superman launches Doomsday into the gravitational pull of the sun with himself caught in it as well as they both plummet into the fiery tomb, Superman asked that the Legion would ensure that no one unearth this monster again.

Another Legionnaire interjects his opinion in telepathic communicating declaring that A lot of responsibility to rest upon one Legionnaire the voice is revealed to be Cosmic Boy who has come to Superman's rescue but not alone but with the rest of the Legionnaires creating a buddy system link chain to pull Superman out of the sun pull.

During the battle, the Monitors suddenly change direction and race to reboot Smallville and if they succeed everything will be lost. Superboy has gathered all of the youngest of heroes and they prepare to stop the tide. Superman orders him to stand down but another team arrives to help, the Legion. With the Legion arrival as back up the Titans with Superman's blessing rush to stop the reboot in Smallville.

Over the years there have been three primary versions of the Legion of Superheroes but in all three Imra Ardeen, Garth Ranzz and Rokk Krinn are the founding members. Imra, Garth, and Rokk went back in time and recruited young Clark Kent (Superboy) to join their superhero team in the future. In all three Legion histories Imra (also known as Saturn Girl) has been thought of as the heart of the Legion of Superheroes. Imra's main relationship through the years has been with teammate Garth Ranzz (in the original continuity the two married and had children) despite its hardships, such as their child turning into Legion villain Validus (original continuity), Garth's death and resurrection (second continuity) and their short breakup (third continuity). Imra was in a relationship with Rokk briefly in the second continuity. Imra has sometimes struggled with social behavior, possibly due to her telepathic powers and even in the second continuity struggled with losing her sanity but has been able to get past these problems. Imra was thought of as an almost motherly figure in the Legion. In the original and current continuities Imra, along with Rokk and Garth, are seen as having a huge effect on Superman and have had a huge effect on him growing up. Imra is from a colony that resides on Titan, the moon of Saturn, with a population of psychic people.

Saturn Girl's design has fluctuated over the course of various series reboots. Her first design featured a yellow blouse with black trim, a "Saturn" planet design, her code-name "Saturn Girl" written on the front, and a green skirt and boots. Her second and most familiar design was the red and white blouse with a yellow planet Saturn, red skirt and leggings, and white boots. In Action Comics #467, she appeared in a cutaway swimsuit design sent in by a fan named K. Haven Metzger, and this became her costume until 1982, when she returned to the familiar red and white costume.

Other faces of Saturn Girl

Melissa Joan Hart as the voice of Saturn Girl in Superman: The Animated Series and Justice League Unlimited. 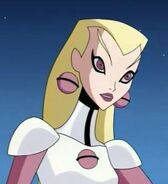 Kari Wahlgren as the voice of Saturn Girl in Legion of Super-Heroes.

Tara Strong as the voice of Imra Ardeen/Saturn Girl in Justice League vs. Fatal Five (2019)