Smallville Wiki
Register
Don't have an account?
Sign In
Advertisement
in: Wikilink templates, Season 10 characters, Characters in the comics,
and 9 more

Harriet is Granny Goodness's appointed leader of the Female Furies.

She is a brave and furious woman. It was claimed she can torture any person without mercy or pity.

Harriet is presumably human. She has long brown hair, a toned body, and has a claw located on her right arm that is powered by kryptonite.

Harriet is trained by Granny in combat and in the use of sharp claws which she uses to fight. The claws she uses are powered by kryptonite and are the source of her strength, dexterity and invulnerability. Kryptonite also seems to make the claws sharper. They can become so sharp that they glow Green K radiation. She was able to subdue Clark Kent when he was weakened by kryptonite. She was later defeated in hand to hand combat by Tess Mercer.

Harriet, herself, does not have Super Strength. Her "claws" were powered by Kryptonite, which allowed the other Furies and her to subdue Clark. Once the Kryptonite was no longer a threat to Clark neither were the Furies. She also loses a fight with Tess at the end of the episode.

While Clark attempted to help a young girl escape from Granny Goodness,

he heard the sounds of claws, swords and combat. Upon arrival, he saw women training with sharp weapons but was subsequently weakened by kryptonite. One woman attacked Clark with a kick, another with a cane, and lastly, Harriet scratched Clark's face with her sharp claws. A fighter lassoed Clark down to the floor and Harriet dominated him by stepping on his chest. Harriet, in reference to the young girl, stated no one there needed saving - except him.

Later, Harriet was putting more kryptonite in her claws while her girls were holding Clark with chains. Clark tried to convince Harriet that he could help her and her sisters escape, but she claimed she didn't want to, stating no one would love them as much as Granny did and that she'd never abandon them. He attempted to convince Harriet that Granny was controlling them and forcibly making them forget where they came from, but Harriet stated that this was their home now. Harriet then scraped Clark with her kryptonite-ridden claws. Granny Goodness entered and ordered Harriet to stop torturing Clark.

Tess found Harriet after she escaped from Granny. At the moment that Tess was descending the stairs, Harriet pushed her against a wall and fought with Tess. She tried to attack Tess several times but when Tess got the upper hand, Harriet was thrown through a glass panel and knocked unconscious.

Other faces of Mad Harriet 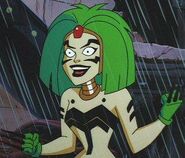 Andrea Martin as the voice of Mad Harriet in Superman: The Animated Series and Justice League Unlimited. 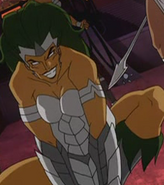 Salli Saffioti as the voice of Mad Harriet in Superman/Batman: Apocalypse.