Smallville Wiki
Register
Don't have an account?
Sign In
Advertisement
in: DC Universe characters, Characters in the comics, Season 11 characters,
and 2 more

Dr. Harleen Quinzel is a psychiatrist at Arkham Asylum.

In Gotham City, Batman and Nightwing are doing their best to contain the newly powered inmates of Arkham, who have already been transformed into Yellow Lanterns. Mr. Freeze, who is one of the inmates, initially doesn't want to hurt anyone but the ring forces him to start causing chaos along with the others and harvest fear for their master, Parallax. On his way out of his cell he encounters Dr. Harleen Quinzel, one of the psychiatrists there, and Freeze apologizes for everything he is about to do to her as he can't control his actions anymore. Strangely, Harleen starts laughing hysterically and when Freeze asks her why is she laughing she says she doesn't know why. Luckily, Superman arrives just in time to offer assistance and save Dr. Quinzel.

Harley Quinn was originally created for the Batman: The Animated Series and made her first appearance in the episode "Joker's Favor", as what was originally supposed to be the animated equivalent of a walk-on role. The graphic novel Mad Love recounts the character's origin. Told in the style and continuity of the animated series, the comic book describes Dr. Harleen Frances Quinzel, M.D. as an Arkham Asylum psychiatrist who falls for the Joker and becomes his accomplice and on-off sidekick. The New Batman Adventures series adapted Mad Love as the episode of the same name. Her close friendship with Poison Ivy, that was heavily featured in the TV series, has also been adapted into the comics.

The character proved so popular that she was eventually added to the comic book canon, debuting in Batman #570, as part of the No Man's Land story, although she had previously appeared in the Elseworlds stories, Batman: Thrillkiller and Batman: Thrillkiller '62. The comic book version of Harley, like the comic book version of the Joker, is more dangerously violent and less humorously quirky than the animated version. Quinn's DC Universe comic book origin, revealed in Batman: Harley Quinn, is largely an adaptation of her animated origin from the Mad Love graphic novel.

A Harley Quinn ongoing series was published monthly by DC Comics, dealing with her going solo, eventually starting a gang and then fleeing Gotham for the city of Metropolis with her friend Poison Ivy. Quinn dies, only to be resurrected and return to Gotham. The series ends with Harley turning herself in to Arkham Asylum, having finally understood that she needs help. It is also revealed in the eighth issue that Harley had a relationship in college with fellow psychiatry major Guy Kopski whose suicide started her obsession with the Joker. Harley later appears in the series Hush. She is next seen in a Villains United Infinite Crisis special, where she is one of the many villains who escape from Arkham, although she is knocked unconscious the moment she escapes.

Harley next appeared in Batman #663, in which she helps the Joker with a plan to kill all his former henchmen, unaware that the "punch line" to the scheme is her own death. Upon realizing this, she shoots him in the shoulder. Harley resurfaces in Detective Comics #831. Harley has spent the last year applying for parole, only to see her request systematically rejected by Bruce Wayne, the layman member of Arkham's medical commission. She is kidnapped by Peyton Riley, the new female Ventriloquist, who offers her a job: Harley turns the job down out of respect for the memory of Arnold Wesker, the original Ventriloquist, who attempted to cheer her up during her first week in Arkham while the Joker was still on the loose. She then helps Batman and Commissioner Gordon foil the impostor's plans. Although Riley escapes, Bruce Wayne is impressed with Harley's effort at redemption and agrees with granting her parole. In Birds of Prey #105, Harley Quinn is revealed as the sixth member of the Secret Six and upon hearing that Oracle has sent the Russian authorities footage of teammate Deadshot murdering the Six's employer as payback for double-crossing them, Harley asks, "Is it a bad time to say 'I quit'?", thus leaving the team. In Countdown #43, Harley appears to have reformed and is shown to be residing in an Amazon-run women's shelter, having abandoned her jester costume and clown make-up. She befriends the Catwoman's former replacement, Holly Robinson, as well as then succeeds in persuading her to join her at the shelter, where she is working as an assistant. They are both brought to Themiscyra by "Athena" (really Granny Goodness) and begin Amazon training. The two reveal Granny's deception and they follow her as she retreats to Apokolips. Later they, along with Mary Marvel find the Olympian deities, whom Granny had been holding prisoner and the group frees them. Harley is granted powers by Thalia as a reward. Upon returning to Earth, the powers vanish and Harley and Holly return to Gotham City.

Harley Quinn joins forces with Poison Ivy and Catwoman in the series Gotham City Sirens. Having moved in with Pamela Isley at the Riddler's apartment, she meets up with Catwoman, who offers for the three of them to live and work together. A new villain who tried to take down Selina Kyle named Boneblaster breaks into the apartment and the three of them have to move after they defeat him. Later, after a chance encounter with Hush, the Joker attempts to kill her, apparently out of jealousy. Quinn is rescued by Ivy and Catwoman, as well as it is later revealed that her attacker wasn't the real Joker, but one of his old henchmen impersonating him. It is later revealed that she was born and raised in Bensonhurst, Brooklyn, into a Jewish-Catholic family. Her father is a con artist who is still in jail, her brother, Barry, is a slob with dreams of rock stardom and her mother, Sharon, wants her to stop the "villain and hero stuff". It is stated that the reason why Harley chose to become a psychologist in the first place was to try and understand her own broken family. Following a number of adventures with Catwoman and Ivy, Harley betrays them and breaks into Arkham with the goal of killing the Joker for abusing her as often as he did. However, Harley ultimately chooses to instead release Joker from his cell and together the two orchestrate a violent takeover of the facility that results in most of the guards and staff members either being killed or taken hostage by the inmates. Harley and the Joker are eventually defeated by Batman and Catwoman, as well as Harley is last seen being wheeled away while bound in a straitjacket and muzzle. Shortly after this, Poison Ivy breaks into Harley's cell and attempts to kill her for her betrayal, but instead offers to free her if she helps kill Catwoman, who had left both of her fellow Sirens behind in Arkham. Harley agrees and the two set out to trap Catwoman. During the ensuing fight, Catwoman says that she saw good in them and only wanted to help. Just as Batman is about to arrest them, Catwoman helps the two of them escape.

In the New 52, Harley Quinn's costume and appearance is fully revamped, with a skimpier costume, bleached skin and altered hair color, consistent with her new origin.

Harley's origin was also tweaked. She remained a doctor at Arkham Asylum where she "treated" the Joker, but knew from the get go that he was lying to her. Regardless, she still fell for him and when she found out that her superior was stealing her research for a book, it drove Harley to help the Joker escape. Joker would bring her to the chemical plant where Batman caused the accident that bleached his skin, deforming him, as well as throws Harley into the same chemicals, causing a similar effect on her.

After a falling out with the Joker, she goes into a murderous frenzy, directed towards people responsible for the Joker's imprisonment, to prove herself to him. Captured by Black Canary, she is forcibly inducted into the Suicide Squad by Amanda Waller. Forced to undergo literally suicidal missions with her chosen teammates, Harley is portrayed in a more violent, relentless way than usual, having little to no human remorse and appearing to be a gleeful and dangerous homicidal maniac. Harley is heavily underestimated by most members of her team and the Task Force X in general, which has, in fact, played up to her advantage. When she discovers that the Joker is rumored to be dead, it takes a further toll in her already addled mind and betraying the Suicide Squad, she puts their safety and secrecy at risk by turning herself into the Gotham Police Department in a plot to gain access to the skinned face of the Joker. Her plan apparently pays off and she manages to recover the face, though in a further psychotic episode, Harley captures and ties up Deadshot and places the skinned face of the Joker over Deadshot's face, so that she can carry on a "conversation" with her dead lover. Deadshot lures Harley in close, shooting and severely injuring her during the conversation.

After the Joker returns to Gotham, he visits her at Deadshot's funeral. Despite her happiness at seeing him alive, if disfigured, he brutal and vengeful, having learnt already of her dalliance with Deadshot. He had sensed a change in her and he didn't like it. He agreed, though, to forgive her if she would do him a favor. He then forces her to disguise herself in his old Red Hood costume and trick Batman into coming to the chemical plant where they first met. Batman then falls into a tank and demands Harley to tell him where Joker is. But she only replies, in tears, that he's not "her Joker" anymore. Harley has gained a more independent personality from the influence of the Suicide Squad while Joker is much more viscous and different than she remembered him to be. Harley and the Joker have a brutal standoff and Harley announces that she breaks up with him. The Joker is disappointed with Harley's new attitude and manages to poison her, later trapping her in a prison cell full of remains of past "Harley Quinns", revealing she was not the first and only one in a long line. Harley manages to escape and flees.

She later got her Harley Quinn monthly series.

Other faces of Harleen Quinzel 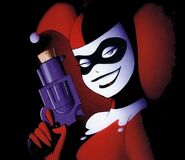 Arleen Sorkin as the voice of Harley Quinn in Batman: The Animated Series, The New Batman Adventures, Gotham Girls, Justice League, Static Shock, World's Finest: The Batman/Superman and Batman Beyond: Return of the Joker. 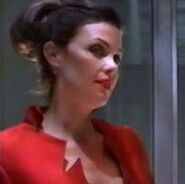 Sherilyn Fenn as Dr. Harleen Quinzel in the unaired pilot episode of Birds of Prey. 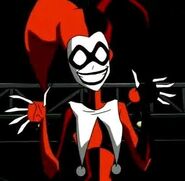 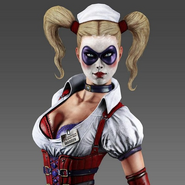 Arleen Sorkin as the voice of Harley Quinn in Batman: Arkham Asylum (2009) 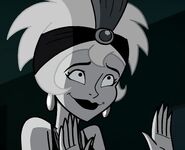 Meghan Strange as the voice of Harley Quinn in Batman: The Brave and the Bold. 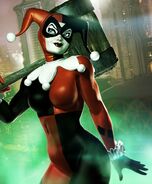 Tara Strong as the voice of Harley Quinn in Batman: Arkham City (2011)

Hynden Walch as the voice of "Yo-Yo" in Justice League: The Flashpoint Paradox.

Tara Strong as the voice of Dr. Harleen Quinzel in Batman: Arkham Origins (2013) 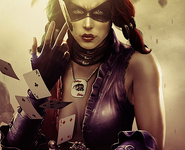 Tara Strong as the voice of Harley Quinn in Injustice: Gods Among Us. (2013) 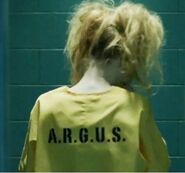 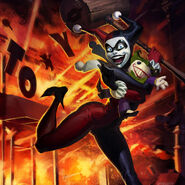 Tara Strong as the voice of Harley Quinn in Infinite Crisis.

Hynden Walch as the voice of Harley Quinn in Batman: Assault on Arkham (2014)

Tara Strong as the voice of Harley Quinn in Batman: Arkham Knight (2015) 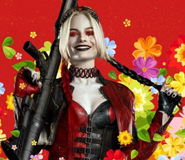 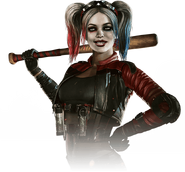 Margot Rubin as the voice of Apocalypseburg Harley Quinn in The Lego Movie 2: Second Part (2019) 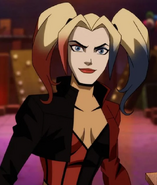 Gillian Jacobs as the voice of Harley Quinn in Injustice (2021) 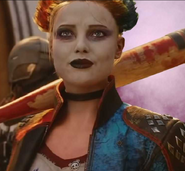 Tara Strong as the voice of Harley Quinn in Suicide Squad Kill The Justice League (2023)
Community content is available under CC-BY-SA unless otherwise noted.
Advertisement