Co-Ruler of the Underworld
Monarch of Souls

Hades is the king of the dead and one of the overlords of the Underworld alongside Osiris. One of the old gods of Greece and a former denizen of Mount Olympus, Hades was imprisoned in the hellish tomb of Tartarus by his brother Zeus to protect the living world from his vengeance.

Hades is a red skinned humanoid with black hair, facial hair and enormous horns on his head. He also has long black fingernails and long pointy ears. He wears a golden and black armor with knee pads shaped like skulls and a red cloak.

After being imprisoned by Zeus, Hades became angry and resentful and longed to see the beauty of Olympus again. He was vindictive to those who failed him, as seen when he turned Bones' skin invisible. However he has also shown a slightly cowardly side, as seen when Hades surrendered after Superman threatened to throw him into space. The look of terror in Hades's eyes as he looked into the eternal void of the twenty-eight known galaxies further backs this up, as does the fact that he rarely fights his opponents directly, instead ordering his slaves to attack Superman and Wonder Woman.

A long time ago, in order to be kept separate from the mortal world, Hades was imprisoned by his brother Zeus in a hell of his own making, Tartarus. Zeus crafted a jewel called the Eye of Ares and gave it to the Amazonian Queen Hippolyta, who aided him in the imprisonment of Hades. The jewel was the sole object that could set Hades free into the mortal world.

During World War II, the anti-occult Shadowpact unit members, Bones and Felix Faust, stumbled upon an ancient artifact and made ​​a deal with Hades to give them eternal youth in exchange for helping him return to the mortal realm. Bones was unable to fulfill his end of the bargain and paid the price, with Hades turning his skin invisible. Faust remained loyal to his master and ever since then made attempts to fulfill his part of the deal and free Hades.

When Faust confronts Bones during modern times in Washington DC, he demands him capture Hippolyta's daughter, Diana and threatens him by saying "Hades taketh away and Faust returneth".

With Diana captured by Bones' D.E.O. and unable to hinder with his plan, Faust schemes to use Hippolyta, who is held captive inside the D.E.O. facility's Black Room, in order to release Hades from his otherworldly prison.

Faust manages to take the Eye of Ares from Hippolyta's tiara and throws it into the water. Suddenly an earthquake starts and a portal opens from which the god of death, Hades, emerges and says that he is glad to see the light of the stars again.

Hades along with Faust are walking towards Lincoln Memorial and Hades, seeing the Washington Monument, states is fascinating that through the ages have passed, man still aims to achieve godhood. Faust replies that advancements came with population growth and that humans continue to be legion. Suddenly a S.W.A.T. team arrives at the scene and orders them to surrender but Faust easily defeats them. Then Hades says he brought a legion of his own.

In Arlington National Cemetery, a guard notices a grave, that has being opened and suddenly an army of living corpses start to come out of their graves.

Later, a helicopter fires against Hades but he doesn't get hurt and asks Faust to deal with it. Faust transforms some of the S.W.A.T. team members into harpies and orders them to fly towards the helicopter, destroying it. Hades watches Superman, who is coming to fight him and recognizes him as the new champion of humankind but he also comments that this being isn't of this world or any other he knows and seeks to undo his work. Faust reveals to Hades that they call him "Superman" and he finds it very obvious. Hades says it's time to show to this champion what it really means to be a god and wishes to find out what he is made of. So he creates an enormous storm surrounding the Washington Monument and transforming it into a giant hand made of rock. Seeing that, a horrified Superman calls for back-up again.

As Superman attacks the stone giant, it knocks him out and then Hades comes close to Superman and says that he is definitely not from this Earth and not quite one of the New Gods either. Superman says he is just a man who tries to do the right thing and punches Hades making him bleed and retorting that he is not an actual Deity either, but just another being from a different dimension, wanting to enslave humanity. Then Superman attacks him again but Hades manages to hit him first saying that he had once conquered the world and he can do it again but Superman says humanity didn't have him before. Hades proceeds to make the giant crush him beneath his foot. After that, Faust informs Hades that danger approaches and Hades says he will deal with Hippolyta like he dealt with the last supposed "Champion" of humanity but Faust tells him that it's not Hippolyta but rather her daughter. Then Hades says they must strive to assure their safety.

Hades, having defeated Superman, is heading to the Lincoln Memorial and sits on the destroyed statue of Abraham Lincoln, using it as his throne, while Diana enters the scene to confront him. She is appalled by the use of the dead people in his schemes, but he says he gives them a purpose once again. Diana then retorts that they do not need purpose but peace. Hades then shows her that his harpies have captured Steve and threatens to turn him into one of the dead if she does not surrender to him, but Diana says that if they hurt him, she will drag Hades back into Tartarus, impaled on her sword. Hades is surprised that an Amazon defies one of her Gods for a man but Diana says she is fighting for all mankind. The mighty god mocks her by saying that although Hippolyta's blood runs in her veins, she can not stop him by herself. Suddenly, Superman resurfaces under the foot of the rock giant, throwing him down and saying Diana does not fight alone.

Superman and Wonder Woman begin to fight against Hades' harpies and during the fight, Diana explains to Clark that the only way to defeat Hades is to send him back to Tartarus, a hellish dimension where he was imprisoned by Hippolyta years ago, in order to keep the Olympian realms in balance. She also says that her mother in order to imprison Hades in the first place she had to kill the witch, who served him, meaning that now they have to kill Faust. Superman says that is not going to happen and there is always another way, taking Hades and flying him into outer space.

Before they go into space, Superman warns Hades that even if he is immortal he can throw him into deep space whenever he wants, to spend eternity wandering in the black cold endless void. Intimidated by Superman, Hades decides to finally surrender. Then Superman throws him back to Earth, inside a portal leading to Tartarus, imprisoning him once again. Before the portal is closed, Diana catches Faust with her lasso and tells him that he will share the fate of his master, throwing him inside the portal as well. After the portal is closed, the stone giant collapses.

Hades is an Olympian god and lord of the underworld. His kingdom is guarded by Cerberus and surrounded by the river Styx where Charon ferries souls across. This position has put him into conflict with Wonder Woman many times.

Pre-Crisis Hades did not figure frequently in the adventures of Wonder Woman until the end of the first volume, when Hades was tricked by the Anti-Monitor into making a pact with Ares to conquer Olympus. The plot was thwarted when Persephone inspired by the love between Wonder Woman and Steve Trevor, went to her husband to profess openly her love for him. Hades pulled out of the scheme and Steve Trevor freed the deities while Wonder Woman engaged Ares in final combat.

Post-Crisis as a result of the machinations of the alien god Darkseid, the Olympian deities were each split into separate entities for many years, existing as both their Greek and Roman variations. Hades' Roman counterpart, Pluto, ruled his own dimensional variant of the Underworld, occasionally coming into conflict with his "brother". The pantheons were eventually merged once more centuries later.

Hades shared a sometimes tense relationship with Wonder Woman's people, the Amazons of Themyscira. The Amazons had been appointed to guard an entryway to his realm, Doom's Doorway, behind which were trapped many monsters and undead abominations. Over the centuries, many Amazons lost their lives when the Doorway was occasionally breached. Despite their loss, the Amazons always attempted to show proper respect to the lord of the underworld, as one of the honored deities of their faith. They even built a large tabernacle to the god of the Dead which carried its own priestess who served a 1,000 years before being replaced by another. In time, most of the deities' followers died off or ceased to believe, leaving the Amazons an important part of Hades and the Olympians' continued existence.

Like her Amazon sisters, Wonder Woman has often had an uneasy relationship with Hades. Early in her career, she descended through Doom's Doorway, slaying most of the monsters and freeing her people from their terrible burden. On other occasions, she has journeyed to the Underworld to request a boon from its ruler or to free the soul of a slain comrade, such as the Amazon Artemis and the murdered messenger god Hermes, which she succeeded in.

In the New 52 Hades appears to be but a child with pasty white skin, a dark suit of armor and most unusually a number of candles where the melted wax obscures most of his face above the nose. As a more modern name for himself he told Lennox to call him Hell.

He is still the ruler of the underworld and the dead, but it appears deeper than it first sounds, more that the reason his realm carries his own name is because he literally is his own realm and everything in it is an extension of his will. Hades suffers a degree of self-hatred, as his realm is filled with suffering, Hades is having difficulties appreciating and expressing his own values, even if he tries to flatter occasionally. Even going so far as refusing to believe it was possible for a Lasso-ensnared Diana to be capable of loving everyone, including him.

Though Diana wished to aid him otherwise, Hades refused to be aided. Leaving Diana to resort to shooting him with one of the Pistols of Eros while he was looking at his own reflection, as the bullet should make him fall in love with the first person he sees.

Other Faces of Hades 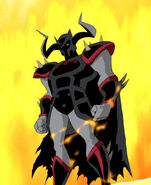 Oliver Platt as the voice of Hades in the 2009 Wonder Woman movie.
Add a photo to this gallery
Retrieved from "https://smallville.fandom.com/wiki/Hades?oldid=310926"
Community content is available under CC-BY-SA unless otherwise noted.