The Green Arrow suit is an outfit worn by Oliver Queen as part of his crime fighting career.

Oliver's first Green Arrow suit was a green and black leather costume. It had a hood, a voice-muffler and dark high tech sun glasses. His glasses had special electronic features, one of these features allowed him to calculate distances, trajectory and track targets for pin point accuracy.[1] His standard suit was sleeveless, but he also had a variant suit with long sleeves for colder environments. Oliver later burned his outfit, after Metropolis was infected with a zombie virus and he had been unable to save Lois from being infected. 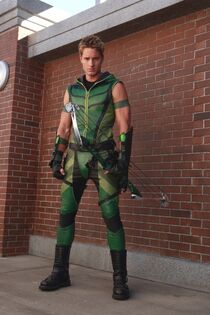 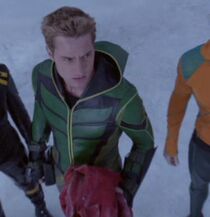 After he returned to his Green Arrow persona, Oliver donned a new suit. This new suit included more black corporated onto the abdomen region creating an arrow shape on his chest. 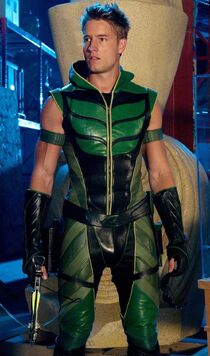 About 6 months after Contact, Oliver donned a new version of his Green Arrow suit. This new suit returned to the design of the original. 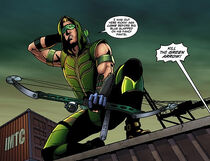 After an encounter with Prometheus landed Oliver in hospital, he chose to create a new suit. No longer would his suit be made out of leather. This new outfit was a green and black armored suit. Instead of a hood, he now wore a helmet and instead of the high tech sun glasses, he began using a domino mask. For added moveability, in extreme emergencies (as the armor added to his weight), he built in a function that allowed him to instantly eject the armor. Leaving him in the domino mask and a black suit, with green light armor for his chest and abdomen region. 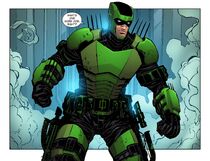 → See more images in Category:Images of Oliver Queen in the Green Arrow suit