Member of the The Legion

Alive (in the 31st century)

Garth Ranzz is a member of the Legion of Super-Heroes from the 31st century under the name Lightning Lad.

He and two other members returned to the past to help Clark stop Brainiac.

"Kal, I may have the smoldering good looks of a human, but I'm actually from a hunk of mud called Winath." - Garth Ranzz to Clark Kent

Garth is a humanoid alien from the planet Winath. He is rather tall, with medium length ginger hair and gray eyes.

When Garth appeared in Legion, he was only seen wearing his Legion uniform. His uniform is made up of a blue leather jacket with yellow lightning bolts around his neck collar representing his power to generate and manipulate electric forces with his body, with a white shirt underneath and blue jeans.

He is also always seen wearing his Legion ring, which gives him the powers of time travel and Flight.

Garth seems to be the most playful and energetic of the three Legion founders. He is quick to fanboy-out upon meeting Clark, and is completely in awe of everything regarding Clark's history, from his Smallville High team jacket, to the baseball that he once knocked into another county, when he was a kid. His youthful enthusiasm often gets the better of him, causing him to speaking without thinking, such as when he almost revealed Clark's future super-hero name. He is also therefore the most obviously disappointed of the trio when Clark refuses to sacrifice Chloe for the greater good, and the most vocal in his determination to do 'whatever is needed'.

Garth can also be a bit overly aggressive, wanting to go for a more direct and violent approach regarding how to defeat Brainiac. However, he is essentially a good, sweet kid, who just wants to make his friends and his idol proud of him.

Garth has the ability to hold or store mass amounts of electricity inside his body and then can generate it out and manipulate it.

"You may be known as Clark Kent now, but one day you will be known as ..." - Garth to Clark, Legion

Along with fellow founding Legion members Rokk Krinn and Imra Ardeen, Garth traveled through time back to the 21st century to stop the Persuader from killing Superman aka Clark Kent. They found him to be at Clark's barn where he had just returned from seeing Jimmy off to Star City. After he had cut open his abdomen, Rokk took away his Atomic Axe and Imra distracted him enough so that Garth could knock him out using his electricity before Rokk took away his stolen Legion ring sending him back to the 31st century. Rokk, Garth and Imra then introduced themselves to Clark before Garth asked Clark where his cape was, with Clark unaware of what he meant.

The three explained to Clark what he is truly destined to become which is a model to all the galaxy for aliens to come to earth and live among humans. The three Legion members decided to help Clark defeat Brainiac, even if they had to kill its human host: Chloe Sullivan, although he had refused their help. The Legion attacked Brainiac, stunning it to prevent its plan to steal knowledge. Working together with Clark, finally, Imra and Clark managed to connect with Chloe from within as Garth used his powers to short circuit Brainiac.

Before returning to the future with what was left of Brainiac, Garth asked to keep one of Clark's baseballs as a souvenir, claiming it was for his sister.

Some time in the 31st Century a war broke out between Earth and New Krypton. Garth was caught and taken prisoner aboard a spacecraft, he is rescued by fellow legionnaire Brainiac 5 who frees him from his restraint cuffs allowing him to access his electrical abilities and engaging his captors while also verbally bantering with Brainiac 5 as personal amusement. The ship transporting them was on a collusion crash heading towards the city of Metropolis, When Brainiac 5 notices a familiar emblem. Garth sees Clark now as Superman catch the ship and landing it safely to the ground. Afterwards he greets his old friend who asked them how he arrived their unfortunately their reunion is interrupted by the squad of guards demanding their surrender.

With the aid from Skeets who causes a distracting for the group they move to the Legion safe house #47 where Clark now disguised in customary 31's attire explains that he was transported by the flight ring, which leaves Brainiac 5 and Garth puzzled as they have no knowledge to Protocol 6 and it wasn't enacted by any Legionnaire. Furthermore Garth persuades Brainiac 5 to reveal to Clark that his cousin, Kara, is held prisoner by EarthGov.

On New Krypton, Supergirl asks Cosmic Boy why he is not with his friend Lighting Lad, with whom he used to be very close and he responds to her that he and Imra kind of avoiding him suggesting he is in a relationship with Saturn Girl.

Later when the Legion activates Protocol 6 all its members arrive on Earth to stop the war.

In outer space, Superman and Supergirl meet the Legion. Brainiac 5 informs the cousins that the Kryptonians have launched an incoming gravity bomb at Earth in response to the attack by Doomsday on New Krypton. Kara calls all the Legion members to follow her to Earth.

Later on Earth, Supergirl and the Legionnaires are ready to stop the bomb that is heading to Metropolis, but it suddenly explodes before they can do anything.

With the gravity bomb activated on earth in Metropolis, Booster Gold along with Skeets commandeer a transporter ship and Booster decides that he'll use the ship to rescue the levitated citizens. He is joined by Kara and the entire Legion of Super-Heroes in the rescue efforts. As Kara beings to instruct the team on their assignments, Lighting Lad notices the approaching battalion of EarthGov ships. A voice from the intercom coming from the ship declares their presence is not their to fight but to aid the Legion, Both Lighting Lad and Brainiac 5 are uncertain in trusting Earth Gov. But Kara says that their been enough destruction to last a few lifetimes and decides to work alongside EarthGov.

Later the Legionnaires created a buddy system link chain to pull Superman out of the sun pull. As they declared that they wouldn't allow Superman to self-sacrifice his Destiny without a fight.

Together the Legion and the last two solo survivors of House of El fly as one unit of the sun proclaiming "Long Live The Legion" & "Long Live The House Of El".

Months later, Dominators are on a spacecraft at the edge of the source wall praying to the gods of order and chaos to forgive their transgressions of going against the master plan and searching for something more than dominion, and are fully ready to be punished resigning to their faith.

They are shocked when they are pulled up by a tractor beam, finding themselves to be rescued by the Legion members Brainiac 5, Chameleon Boy and Lightning Lad who are about to send them back into Dominator Space. Lighting Lad questions the Legion's rescue if they wanted to die. Brainiac 5 points out that Kal-El would have done the exact same thing. An alarm alerts them to the fact that the Source Wall beginning to crack and expel a strange form of energy that is all over the charts which Chameleon Boy refers to as looking to the readings say that it all amounts to "nothing". To avoid destruction the Legion, first transporting Dominator back to their territory, escape into a hyperspace jump back to Earth.

Horrifyingly the 'nothing' has followed them and is still gaining. It is an entropy wave that is now travelling in space and time erasing the past, present and future. The wave is reaching a focal point in the present day 21st century and so the Legion race to intercept, with Brainiac 5 creating the Legion Protocol Seven as a way to contact all Legionnaires.

During the battle, the Monitors suddenly change direction and race to reboot Smallville and if they succeed everything will be lost. Superboy has gathered all of the youngest of heroes and they prepare to stop the tide. Superman orders him to stand down but another team arrives to help, the Legion. With the Legion arrival as back up the Titans with Superman's blessing rush to stop the reboot in Smallville.

Over the years there have been three primary versions of the Legion of Superheroes, but in all three Garth Ranzz, Rokk Krinn and Imra Ardeen are the founding members. Garth was one of the three original Legion of Superheroes members to recruit young Clark Kent (Superboy) to join their futuristic superhero team. Garth is a quick to act and sometimes humorous member of the Legion in all three primary Legion histories but in all three he has endured tragedies and hardships. He was maimed (original and second histories), his son was turned into Legion villain Validus (original history) and was reborn in another Legion member's body (Element Lad). Garth is from the planet Winath, where most people have twins. Garth is no exception; he has a twin sister who he is close with named Ayla (another Legion member as Lightning/Light Lass). He also has a brother (who has no twin), a psychotic villain named Mekt who in all three versions of the Legion is an enemy to him and the Legion of Superheroes.

Garth's primary relationship throughout the years is with Imra and the two share a love that despite it's hardships continues to endure. Garth even had children with Imra in the original Legion history named Garridan (Validus), Graym, Dacey and Dorrit. Garth considers Rokk one of his best friends in the Legion and is close with his sister as well. In the original and current continuities Garth is one of Superman's best friends from his youth. Although Garth is primarily known as Lightning Lad, his original name is Lightning Boy and he has also used the name Live Wire. Garth and his siblings powers came from a childhood accident that left them with electrical generation and manipulation abilities.

Other faces of Lightning Lad 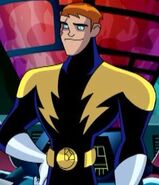 Andy Milder as the voice of Lightning Lad in Legion of Super-Heroes.
Add a photo to this gallery
Retrieved from "https://smallville.fandom.com/wiki/Garth_Ranzz?oldid=318435"
Community content is available under CC-BY-SA unless otherwise noted.