Smallville Wiki
Register
Don't have an account?
Sign In
Advertisement
in: Recurring characters, Season 11 characters, Characters in the comics,
and 5 more

View source
watch 01:40
The Sandman Will Keep You Awake - The Loop
Do you like this video?
Play Sound

Alive (Imprisoned in Tartarus)
Felix Faust is a magical terrorist who serves Hades.

During World War II, Faust was a member of a shadowy anti-occult unit called "Shadowpact", alongside Bones as well as John Zatara, who left the unit after their first mission. During the course of their work, Faust and Bones stumbled upon an ancient artifact and made ​​a deal with the god Hades to give them eternal youth, in exchange for helping him return to the mortal world.

In modern times Washington DC, while Senator Martha Kent has a secret meeting with the Director of the organization D.E.O., Mr. Bones, they are suddenly attacked by Faust and his followers. Martha is rescued by a mysterious woman who defeats most of them. After Bones escapes Faust decides to leave along with the others too and uses a magic spell that allows them to flee.

At a later time, horrible winged creatures attack Diana and Lois Lane, who manage to hold their own, until Superman shows up and defeats them, chasing them away. Nevertheless, one of the creatures manages to wound Diana during the fight and they, now transformed back into men, bring her blood to their master, Felix Faust. He proceeds to pour it into a boiling cauldron and states that he comes closer to fulfilling a promise he made to his master and that "the world of men will be plunged into a darkness".

At Congress hall, Felix is admiring a mural, until Bones comes in. He comments on how Felix looks like he hasn't aged a day, where Felix admits he found away to iron out the kinks and not have his skins and muscles painted visible like Director Bones does. Felix then tells Bones that he is trying to finish what Shadowpact started and in order to do that he needs Diana arrested, but Bones denies that request claiming after thee VRA, the can't touch the heroes because public support is too strong. Then Felix reveals she is not of this earth, causing Bones to wonder if she is an alien,before Felix threatens to send something way worse than Harpies if Bones doesn't comply with his demands. Bones is not unnerved and says Team 7 can handle anything Felix dishes out. Felix then quickly loses patience and nearly takes down Bones removing his makeup with magic simply stating "Hades taketh away and Faust returneth". Bones then begs for mercy with Felix simply tells him to bring Diana into custody before he gets Team 7 to lock Bones away into the Black Room along with the rest of the oddities.

Faust watches as his spell, that he made with a drop of his blood, has led the D.E.O. to catch Diana. With Diana inside the D.E.O.'s facility and unable to interfere with his plans, he schemes to release his master from the prison he was put in years ago by Diana's mother, Hippolyta, who is also revealed to be held captive by the D.E.O.

When Superman, in his civilian identity as Clark Kent, discovers where Hippolyta is being kept, Faust along with a huge monster appears and the beast hits Clark with one of its tentacles.

Faust has invaded the facility and orders his men to attack the monks, with the clear intention of canceling its containment of magic. Clark then comes face to face with Faust, who explains that he is after the jewel on Hippolyta's tiara, which is supposed to be the "eye" of Hades. Faust says that the god Zeus, Hades' brother, as well as Hippolyta imprisoned Hades, with the gem being the only thing that can free him. Faust is now trying to release him, so he can fulfill his part of the deal he, along with the rest of the Shadowpact members, made years ago.

Suddenly, Bones shoots Faust, saying that he will not let him destroy the world, by unleashing Hades. Faust mocks him and tells him that Hades' challenge first cost him his skin and muscles. Now he is going to take away everything else. Clark also gets hit and then Faust takes the gem from the tiara and throws it into the water. Suddenly an earthquake starts and a portal opens from which the God of death, Hades, emerges.

Diana then appears and gives a powerful punch to Faust, warning him to stay away from her mother. The punch seemingly breaks his neck, but he immediately heals and proceeds to vanish.

Hades along with Faust are walking towards Lincoln Memorial and Hades, seeing the Washington Monument, states is fascinating that through the ages have passed, man still aims to achieve godhood. Faust replies that advancements came with population growth and that humans continue to be legion. Suddenly a S.W.A.T. team arrives at the scene and orders them to surrender but Faust easily defeats them. Then Hades says he brought a legion of his own.

Later, a helicopter fires against Hades but he doesn't get hurt and asks Faust to deal with it. Faust transforms some of the S.W.A.T. team members into harpies and orders them to fly towards the helicopter, destroying it. Hades watches Superman, who is coming to fight him and recognizes him as the new champion of humankind but he also comments that this being isn't of this world or any other he knows and seeks to undo his work. Faust reveals to Hades that they call him "Superman" and he finds it very obvious.

Later, Faust informs Hades that danger approaches and Hades says he will deal with Hippolyta like he dealt with the last supposed "Champion" of humanity, but Faust tells him that it's not Hippolyta but rather her daughter. Then Hades says they must strive to assure their safety.

Diana tells Clark that in order to imprison Hades in the first place, her mother had to kill the witch who served him, meaning that now they have to kill Faust. Superman says that is not going to happen and there is always another way.

After Hades is sent back to Tartarus by Superman, Diana catches Faust with her lasso and tells him that he will share the fate of his master, throwing him inside the portal to Tartarus, as well.

In his millennia on Earth, Faust has studied the occult to amass formidable talents in spell casting and the summoning of demons. What Faust lacks in true magical power he makes up for in his willingness to sell his soul or sacrifice others, including his own children, to obtain mystical might.

Seven millennia ago, sorcerer Felix Faust challenged the wizard-king Nommo, ruler of magnificent Kor, for possession of the burning enigma called the flame of life. Having little to trade except his own malefic magicks, the greedy Faust was banished from the bargaining table as Kor crumbled to history. Felix did not escape his other dimensional prison until the early 20th century, when occult dabbler Dekan Drache made his own one-sided Faustian pact.

As a young man Felix Faust read the story of how his namesake, Faust, had sold his soul to the devil for supernatural powers. From that moment onwards, Felix sought to do the same, studying dead languages in Vienna, archaeology in London and history in Sorbonne.

He also visited the ruins of Ur and Lagash in Chaldea, famous for magicians. He even unearthed a copy of the Necronomicon, the book of black magic written by mad Arab Abdul Alhazred. He studied ancient parchments and the clay tablets of long dead sorcerers, all in preparation for a single moment - when he would speak the incantation that would summon to him the three ancient demons known as Abnegazar, Rath and Ghast, supremely powerful beings who had been imprisoned beneath the Earth for billions of years by the mysterious Timeless Ones.

Faust hoped to force the three demons to reveal to him the secrets of their supernatural powers. Unfortunately for Faust, certain mystic objects were required to truly free the three demons from their spell: the red jar of Calythos, the green belt of Ulthool and the silver wheel of Nyorlath. These objects had been hidden by the Timeless Ones where no ordinary mortal would ever locate them.

With the demon's aid, Faust took mystic control of the members of the Justice League of America and used them to recover the three talisman for him. But the JLA managed to defeat Faust before he could use the belt, jar and wheel to make himself the most powerful sorcerer in the universe.

Several times of the next few years Faust returned, always trying to gain supreme power and always thwarted in his efforts by the JLA. Once, while in prison, during a psychological seminar, Faust experienced a primal scream. In one shrieking instant, all the pent up frustration of his life were expelled and Felix Faust reborn.

Paroled soon after, Faust became curator of Special Literature at Star City public Library where he soon came into contact with the secret journal of the ancient sorcerer Nostromos and found himself possessed by Nostromos' evil spirit. Though Faust managed to free himself from Nostromos' possession with the help of the Justice League, Nostromos' spirit had left its mark and Felix Faust soon returned to his evil ways.

More recently, Faust masqueraded as the sorcerer Nabu to tempt Ralph Dibny, the Elongated Man, with the mystic means to resurrect his murdered wife Sue. But Ralph's twitching nose smelled a mystery and the ductile detective turned the tables on Faust, trapping him and the supreme tempter Neron within the tower sanctum of Dr. Fate. Not one to make the same magical mistake twice, Faust tempted Black Adam with the promise to raise his beloved Isis from Death's embrace. This time, however, he opted for a simpler ruse, switching the skeleton of Isis with the bones of Ralph Dibny and thus confounding the resurrection spell.

In Faces of Evil: Black Adam, it is revealed that Felix Faust had resurrected Isis and had been keeping her captive.

In the New 52 Felix Faust has been building an army of followers near the Amazon Jungle. Constantine is baited into being brought to Felix and when he turns around he looks very gaunt and zombie like. His eyes burning with an unknown power, his skin losing all color and his teeth are rotting. The team makes it through the Amazon Temple and when the group find Felix he is knocked unconscious by Black Orchid, an operative of Steve Trevor's. Black Orchid is disguised as Constantine and is able to get close to knock him out. Doctor Mist reveals that it is The First Tesseract, the Eighth dimensional Map. Constantine reveals it is the map to The Books of Magic. Faust sold his soul to gain all the knowledge Nick Necro had before his death. They arrive in Nanda Parbat for the final battle with the JLD. The books of magic knock them unconscious and after the final defeat are taken into custody by ARGUS and are being held in their underground metahuman facility.

Other faces of Felix Faust

Peter Cullen as the voice of Felix Faust in Super Friends.

Dee Bradley Baker as the voice of Felix Faust in Batman: The Brave and the Bold.

Dee Bradley Baker as the voice of Felix Faust in Young Justice. 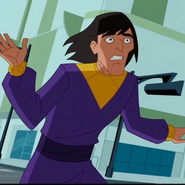 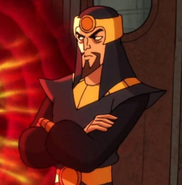