Smallville Wiki
Register
Don't have an account?
Sign In
Advertisement
in: Wikilink templates, Season 10 characters, Characters in the comics,
and 6 more

Member of the Suicide Squad

Alive
Emil LaSalle is a metahuman member of the Suicide Squad with the power of teleportation.

A current team member of Suicide Squad, LaSalle was partnered with Rick Flag in their mobile base in Smallville, targeting General Lane to prevent the passing of the Vigilante Registration Act. When the base was attacked by Green Arrow and the Blur, the two Suicide Squad members evaded interrogation through LaSalle's teleportation. LaSalle later bombed an Anti-Vigilante support building when the bill had passed.

Warp is a French supervillain most commonly associated with the team, the Brotherhood of Evil. Little is known about how he gained his teleportation powers or why he hated the woman known as Madame Rouge. As Warp, he joined the Brotherhood of Evil because of that group's plan for revenge against Rouge. In a battle with the New Teen Titans, the Brotherhood succeeded in killing Rouge and her accomplices. The Brotherhood then turned their attention to Brother Blood. In an attempt to learn Blood's secrets, Warp kidnapped Raven, but the Titan was rescued by her team mates.

Warp was one of the villains stranded on planet Salvation. He seemingly died when the portal exploded.

Other faces of Warp 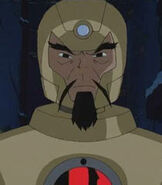 Xander Berkeley as the voice of Warp in Teen Titans. 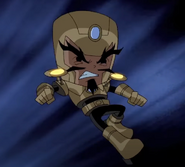