Co-Owner of Maxwell's (for Club Desaad)

"What exactly are you, Desaad?"
"A prophet. A servant, loyal to a far greater power." - Clark Kent and Desaad, Masquerade

Desaad was a minion of Darkseid. He owns a series of nightclubs and throws fetish parties, such as the Club Desaad party hosted at Maxwell's.

Desaad appears to be a tall, well built, young man with short, dark blond hair, blue eyes and a scruffy appearance and speaks with a New Zealand accent. He is usually seen wearing dark clothing, which include dark suits or a black leather jacket ontop of other black clothing.

When Desaad attacked Clark in the chapel, his eyes turned completely black, but it is unknown if this was part of his ability or if he was possessed by the essence of Darkseid.[1]

Dessad is mysterious and extremely deceptive and secretive, and urges or encourages people to indulge partying and drinking while at his night-club. He is also quite manipulative, and uses the seven deadly sins as a tool of corruption.

As a follower of the Apokoliptian Lord Darkseid, Desaad was endowed by his dark savior with a few potent abilities in order for his chosen prophet to perform in his duty of corrupting both the righteous and the depraved alike, bringing Darkseid's apocalypse to Earth even quicker.

"Do you really think you possess the power to vanquish our lord from the souls of those he saved?" - Desaad to Oliver, Finale, Part 2

Desaad first appeared, bringing Gordon Godfrey to Granny Goodness and explaining to her that Godfrey had been chosen to be the third minion of Darkseid and that their unholy trinity was now complete with him and they were ready to prepare for the arrival of their dark lord and the coming war.

Desaad, like Granny Goodness, appears to have been on Earth for quite some time, possibly having arrived during one of Darkseid's previous unsuccessful invasion attempts and stayed behind in order to slowly corrupt the human race in preparation for Darkseid's next attempted invasion. This would mean that he is therefore much older than he physically appears. When Chloe mocked his conversion techniques, he responded that the process has worked flawlessly on countless other humans over the years.

Desaad had been using his mysterious abilities to kill several people who were resistant to the corruption of the Darkness, as he targeted "Mr. Jones". While posing as a coroner in order to dispose of his victims' bodies, he was found by Clark Kent who was investigating a murder. Desaad found Chloe lurking outside his building and used his telekinesis to knock her out. He then used his mental abilities in an attempt to corrupt Chloe with the Darkness, but she was able to resist long enough for Clark to rescue her. Desaad also revealed to a captured Chloe that Darkseid was close to fully manifesting himself on Earth.

Desaad then confronted Clark himself, commenting that he could tell that Clark had grown stronger since his prior encounters with Darkseid's other two followers. After lamenting the fact that Clark now appeared to be too strong to be corrupted by Darkseid, Desaad used his power to temporarily subdue Clark while he attempted to escape. However, Oliver appeared and was beating him until Clark called him off. Clark had him committed to Belle Reve, however Desaad won by gaining Oliver as a new bearer of the Omega symbol.

Some time after being sent to Belle Reeve he had escaped from there. He and the other prophets of Darkseid watched as Apokolips came to Earth. He, Granny and Godfrey met with Oliver Queen and gave him a Gold kryptonite ring so he could give it to Clark and remove his powers.

As Apokolips eclipsed the Earth, Desaad, Godfrey, and Granny anxiously awaited the rapture. Suddenly, Oliver, now rid of his Omega symbol appeared. Desaad was not pleased that Oliver had reverted to the side of light and taunted him, saying that he could never stop Darkseid. Before the three could stop him, Oliver fired arrows at the prophets, with all three turning into smoke and vanishing.

Originally born on New Genesis, the unnamed youth was corrupted by Darkseid. Darkseid made him believe that his pet cat had killed his pet bird. He punished the cat by burying it alive. When the bird came back, he killed the bird in a fit of rage. Then he followed Darkseid to Apokolips.

Taking his New God name from "a being from a future, who taught me so much in my chosen field" (assumed to be the Marquis de Sade), Desaad became the young Darkseid's henchman. When threatened by Darkseid's mother, the wicked Queen Heggra of Apokolips, Desaad was forced to poison Darkseid's beloved, the Princess Suli. Heggra's plan was for Darkseid to then be married to the concubine Tiggra. When Darkseid discovered what happened, he forced Desaad to poison Heggra in revenge. From that day, Desaad has been Darkseid's main henchman.

In the New 52 during Darkseid's first incursion on Earth Desaad appears in Apokopolis discussing with Steppenwolf about cloning the DNA of a captured and tortured Superman for a new race of Parademons. Five years later he impersonates Michael Holt attempting to capture Power Girl.

Other faces of Desaad 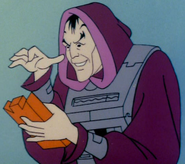 René Auberjonois as the voice of Desaad in Super Friends (1984). 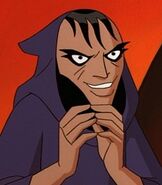 Robert Morse and Rene Auberjonois as the voice of Desaad in Superman: The Animated Series and Justice League (1997).

Dee Bradley Baker as the voice of Desaad in Young Justice (2011). 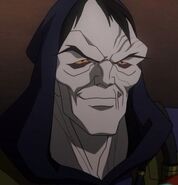 Bruce Thomas as the voice of Desaad in Justice League: War (2014).