"I have been speared by Mayan warriors, survived Mongols' arrows, and the cold steel of Crusaders' blades. What makes you think the sting of a 9 millimeter could slow me down?" - Curtis Knox, to Lex Luthor, Cure

Curtis Knox is an immortal doctor who supposedly cured meteor freaks from their powers and psychosis. In actuality, he was obsessed with trying to make his wife Sophia immortal by harvesting kryptonite-infected body parts from meteor freaks.

In addition to his powers, Dr. Knox developed non-metahuman abilities during his long life. He was a brilliant neurosurgeon who developed a cure for meteor freaks. He cured them, while simultaneously removing all of their memories of having powers and of Lex's experimentation.

Dr. Knox lacked the power of physical invulnerability. He was capable of being wounded: when he was shot by Lex, he bled and was knocked down for several seconds before he started breathing again. The extent of his wounds seems to be limited: by the time Dr. Knox recovered from the gunshot wounds and stood up, his bleeding appeared to have abated.

He was also capable of being knocked out: when Clark electrocuted him by throwing him into a generator, Dr. Knox was knocked unconscious for several seconds.

Dr. Curtis Knox has been alive for millennia. He has fought warriors from the Mayan culture, a civilization which reached its height between 250 and 900 AD. The Maya were still a viable empire during the time of the conquistadors, which may be when Knox encountered them. He also fought in the Crusades which lasted from the 11th to the 13th century.

Lex Luthor found research that showed that Knox's facial features match those from a painting from 1675.

Knox also revealed that he was Jack the Ripper, a mysterious figure who murdered five prostitutes in in the Whitechapel District of London in 1888. Lex also found a picture of Knox with Hitler, indicating that he was most likely a member of the Nazi Party prior to and during World War II.

Lex Luthor found out what Dr. Knox was up to and tried to kill him by shooting him in the chest six times. Knox then got back up, bleeding but otherwise unhurt, hinting that he had been alive for over 1,000 years. He knocked Lex unconscious and was about to kill him when Clark Kent arrived and knocked the doctor into a live power line.

Clark then went to Dr. Knox's lab to save Chloe. He fought with Dr. Knox in the lab and during the battle Dr. Knox severely damaged some of the equipment keeping his wife alive. She died and Dr. Knox knelt next to her and cried, much to the surprise of Clark and Chloe.

Clark later handed Knox over to the Martian Manhunter. He imprisoned Knox in a holding facility on Mars, somewhere even an immortal would have difficulty escaping from, alongside Batman's doppelgänger as a cellmate.

According to the writer Bryan Q. Miller, Curtis Knox was originally intended to be Vandal Savage but the character was off limits so they had to change his name. The presumption is that he is Savage operating in present day under an alias. In recent years, Savage has been depicted in the comics as harvesting organs from his own long-lived descendants: he does this not to extend his wife's life, but to extend his own as his powers fade.

Vandal Savage is immortal,[1] and has plagued the earth with crime and violence since before the beginning of recorded human history. He is a brilliant tactician with immense technological prowess. He is one of DC's most persistent villains and has fought hundreds of heroes throughout history. In 2009, Vandal Savage was ranked as IGN's 36th Greatest Comic Book Villain of All Time.[2]

In the New 52, Savage is a supporting character in Demon Knights, a story based on Arthurian Lore, co-starring with characters like Etrigan, Madame Xanadu, an Shining Knight. This story taking place in the Middle Ages, starring group of individuals who happened to be in the same area when a massive army under the command of the Questing Queen and Mordru aims to smash through the town of Little Spring to get to Alba Umbra, a mysterious city Savage is, at this point, traveling the world content to simply enjoy life, living for wine, women and war. He is a master tactician and incredibly strong and uses his many skills that he's picked up over his long lifetime to aid his teammates. Vandal's appearance in Demon Knights is a contrast to his previous appearances as he provides much of the comic relief of the book. While he still posses great strength and skill of arms and leadership skills as he ends up being the traininer and commander of the small garrison of Little Spring, Vandal appears to be thinking mostly with his stomach, such as reacting with gleeful delight when dinosaurs crash into the inn, claiming he hadn't eaten one in centuries. Vandal however still has his darker sides and unknown to the other Knights, he was once close to the Questing Queen, but was banished for kissing her.

An older Savage appears in DC Universe Presents, fashioned as an infamous serial killer, Jon "the Vandal" Savage. He claims to be of ancient origin, his crimes sacrifices to forgotten gods which he claims grants him immortality. He has a daughter, Kassandra, who is a police officer that changed her last name from Savage to Sage, was a stand-out student at the FBI academy in Quantico and now dedicates her life to stopping serial killers like her father. This visit marks the first time she's seen her father in sixteen years. Since he was arrested and sent to Belle Reve.

One could argue that Curtis Knox is also the Smallville TV Show's equivalent to Ra's Al Ghul, due to his obsession with immortality, learning new skills throughout his immortal life, self-righteous attitude, and using his good intentions to rationalize his horrible deeds.

Knox also share some similarities with Mr. Freeze, in that he's a low-level superhuman obsessed with keeping his wife alive at almost any cost.

Lex: Doctor, three of my patients are missing. You wouldn't happen to have any idea why someone with a brand new lease on life would suddenly disappear.
Dr. Knox: Perhaps it's because you insisted on eradicating any recollection of their stay at Hotel 33.1.
Lex: No, I insisted they be able to start new lives unfettered by disturbing memories
Dr. Knox: Especially those that could incriminate you.

Lex: I used face recognition software to run an image search. (pulls up image of Knox with Nazis) There we go.
Clark: Knox wasn't alive during World War 2, Lex. He's too young.
Lex: He's much older than he looks. This is Knox in 1888. And here he is in 1675. Clark, he's had a thousand names and he's lived for centuries. That's why you can't kill him. Curtis Knox is immortal.

Dr. Knox: Your powers might be far beyond those of mortal men, but you've met your match.
Clark: I won't let you kill anyone else.
Dr. Knox: I'd kill a thousand more to never have to be alone. You don't know the pain of living centuries, watching the woman you love grow old and turn to dust.

Other faces of Vandal Savage

Phil Morris as the voice of Vandal Savage in Justice League.

Miguel Ferrer as the voice of Vandal Savage in Young Justice. 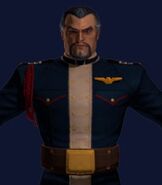 Bryan Talbot as the voice of Vandal Savage in DC Universe Online.

Phil Morris as the voice of Vandal Savage in Justice League: Doom. 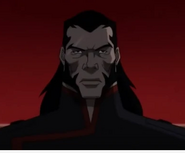 JimPirri as the voice of Vandar Aag/Vandal Savage in Suicide Squad: Hell to Pay (2017)